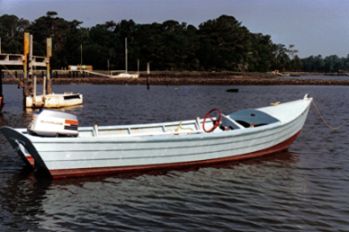 From 1950 through the 1960s, T. N. Simmons and his son built hundreds of small boats on the North Carolina coast that many regarded as the best sportfishing and recreational power boats available. Never manufactured on a large scale, the vessels were simply purchased shortly after Simmons finished them. He initially used juniper in their construction, though he later switched to mahogany for the frames and 3/8-inch marine plywood for planking. Most models had an outboard motor as well. Although large motors became available and were used on the boat, Simmons insisted that an 18-horsepower engine was the correct size for his unusual skiff.

Simmons sea-skiffs, both beautiful and seaworthy, are regarded as classics by their owners. In the early 2000s the U.S. Army Corps of Engineers maintained three of these boats for use in putting down survey stakes and similar duties; other owners and builders included residents of several foreign countries in addition to those of southeastern North Carolina.

Hello, the simmonsseaskiff.com website is no longer - any idea where it went?

Thanks in advance,
John

Thank you for letting us know the link was broken. It looks like the site is gone, but there is a website called the Wayback Machine, an archive of website and I was able to find that site: https://web.archive.org/web/20160315023623/http://www.simmonsseaskiff.co...

I am working with a committee

I am working with a committee for the Wrightsville Beach Museum of History to create wall panels of information about coastal life. Would we have permission to use your information about Simmons Sea-Skiffs on these panels.....citing the source?
Thank you for your consideration.