Telephones began to appear in North Carolina beginning in 1879, three years after Alexander Graham Bell's new invention had first been introduced at the Centennial Exposition in Philadelphia. On 10 March of that year, a telephone was installed in the office of B. W. Starnes, manager of Western Union's Raleigh office, and local businessmen soon came to realize the instrument's utility. On 20 Sept. 1879 the first North Carolina exchange opened in Raleigh, in the rear of the Western Union office at "Battle's Corner," the intersection of Fayetteville and Martin Streets. The enterprise expanded to 30 stations and remained in business only one year. During 1879, however, the first long-distance lines in North Carolina were erected between Raleigh and Goldsboro, and the first long-distance call in the state was made on 14 Apr. 1879 between Raleigh and Wilmington.

Efforts to offer telephone service in the Charlotte area also began in 1879. Western Union manager E. R. Dodge began operations on 17 Apr. 1880 with 34 stations, but the business closed in 1882. Southern Bell initiated its maiden effort in Charlotte in 1879, installing its first telephone in T. C. Smith's drugstore on 18 Jan. 1880. The exchange opened in April 1880 but operated for less than three years. A successful effort finally came in July 1884, when Queen City Telephone Company began operations with 64 telephones.

As the nineteenth century drew to a close, telephone exchanges began cropping up in most North Carolina cities. In July 1889 an exchange opened in Greensboro with nine stations; Southern Bell bought the company in 1903. Southern Bell began operations in Wilmington in 1890 with 200 stations and in Winston-Salem the following year with 52 stations. The Procter Telephone Company brought service to Asheville in 1898, and Southern Bell opened a competing exchange in that region the following year.

The telephone dramatically changed the lives of North Carolinians and all Americans. Many subscribers almost instantly felt less isolated and more connected to their communities. Doctors, law enforcement officers, and firefighters were suddenly a mere phone call away. Business deals could be consummated in minutes over long distances, rather than by the slower, more cumbersome exchange of telegrams. Families could inquire about the health of loved ones and share news. Telephone-related terms such as "operator," "central," "information," and "party line" came into common usage. Telephone operators (almost exclusively females) became popular, 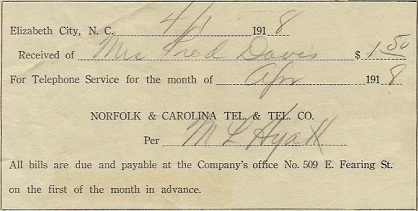 as they could locate almost anyone at any time, knew the weather forecast, and had a wealth of other useful information. The telephone began to be glamorized in popular music and later in motion pictures.

Despite its popularity, however, the telephone industry was a for-profit business, and Bell and other large companies tended to concentrate in urban areas, where the capital investment needed for lines and equipment was lower and profits high. North Carolina was predominantly rural, and consequently much of the state was left without telephone service. Businessmen in smaller towns began to organize their own telephone companies, and farmers bought equipment and switchboards to set up their own "farmer's lines." Later, the rural lines were connected to the nearest telephone company and were finally replaced by rural multiparty lines.

In 1941 the Office of the Utility Commissioner became the North Carolina Utilities Commission, with a chairman and two full-time commissioners. This commission supervised the post-World War II boom in demand for telephone services. Companies could barely meet the requests for installations. The popular new dial service rapidly replaced the old systems, and innovations in cable technology improved the quality of message transmission and reduced system failures. The coming of the Information Age, coupled with telephone industry deregulation and consumer demand for a full range of services, have combined to produce breathtakingly rapid changes in telecommunications. Through satellite transmissions, cellular phones, and access to the Internet, the telephone industry has seemingly decreased the size of the world, just as the first crank telephones installed little more than a century ago gave many North Carolinians a newfound sense of community.

Pound, Arthur. "The impact of the telephone," North Carolina in the Early Twentieth Century. LearnNC.org. http://www.learnnc.org/lp/editions/nchist-newcentury/5092.

Some years back I visited a

Some years back I visited a huge telephone "museum" near Raleigh. It was housed in what looked like an aircraft hanger. The owner had every imaginable type of telephone and parts and pieces. The movie industry came to him to get phones for the proper time period. I don't remember the name or exact place but I hope you might know of it and tell me so I can visit it again. I'll be in Raleigh next month and hope to be able to talk with the owner.

Thank you for visiting NCpedia. I am sending your question to our reference team at slnc.reference@ncdcr.gov to see if they can help.