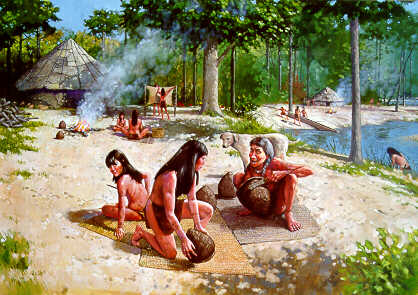 The history of American Indians before European contact is broadly divided into three major periods: the Paleo-Indian period, the Archaic period (8000–1000 b.c.), and the Woodland period (1000 b.c.–1600 a.d.). The limited evidence available about the Paleo-Indian period suggests that the first Indians in the Southeast, as elsewhere, were nomadic, hunting and defending themselves with stone tools (knives and scrapers), clubs, and spears, which were at times tipped with wellcrafted, fluted stone points. During the Archaic period, basketry, bone tools, and finer stone tools appeared. Archaic peoples also began to develop more specialized knowledge of their local environments and the animals and plants that lived there. Though they did not generally travel far beyond these familiar environments, American Indians during this period did begin to establish trade and migration routes that brought the native peoples of the Carolinas in contact with other bands and tribes.

Scholars suggest that small-scale agriculture began to develop among American Indians in the Southeast around 1000 b.c., marking a slow transition to what is known as the Woodland period. During the early Woodland period, native peoples began to concentrate settlements near streams and rivers, where the rich soil allowed successful farming. This Woodland tradition took root among Indians in the Carolina region. Many Woodland people planted crops such as sunflowers, corn, pumpkins, squash, and beans and built permanent wooden homes. Nevertheless, Indians in the Woodland period still relied primarily on hunting, fishing, and gathering. Among the enormous variety of animal resources available, deer was a primary staple, providing food, clothing, blankets, and tools made of antler and bone. Fishing methods included the use of hooks, spears (sometimes poisoned), nets, traps, weirs, and dugout canoes. In most tribes, work was shared by men and women. Indian housing typically consisted of lodges made of bark or thatch, at times raised off the ground. Some Indians, including the Cherokee, also built earthen winter homes without windows. Homes were furnished with straw or cane mats, pottery, basketry, and wooden utensils. As family groups and larger bands formed around productive agricultural or hunting grounds, villages developed. Some villages were surrounded by protective palisades, and most included a council house for public gatherings.

Use of the bow and arrow probably evolved during the middle and late Woodland period; the oldest examples of arrow points in North Carolina have been located near the Yadkin River in the Piedmont. Tobacco pipes of stone and clay, beads, and other ornaments made of shell and clay also came into common use. Pottery began to appear, as did a clear concern for the dead, evidenced in some regions by burial or effigy mounds and earthen enclosures. In some cases, the dead were placed in round or oval pits and buried with grave goods.

The Woodland Indians of North Carolina, though scattered and in many ways diverse, shared a number of cultural traits. Tribal societies were generally organized by leaders rather than rulers, governed by consensus rather than decree, and directed by a sense of community more than by individualism. Community rituals for marking the passage of time and seasons and for personal cleanliness and purification developed along with religious beliefs about the ability of individuals to tap into the supernatural world, which was seen as full of spirits.

Sometime around the middle of the Woodland period (ca. 700 a.d.), an important American Indian cultural tradition known as the Mississippian tradition took shape along the Mississippi River and its tributaries. Over time, Mississippian tribal groups began to migrate into the Southeast, including North Carolina. While Mississippian peoples had many similarities to Woodland peoples, there were also important differences. Mississippian cultures were rooted more deeply in farming than were Woodland cultures, and Mississippians developed large town sites that served as hubs for religious ceremonies and trade. These towns often included large pyramid shaped mounds topped by temples and meeting houses, and the mounds were surrounded by public grounds for games and public rituals. Individual houses, often made of wood, surrounded these public grounds, and beyond the homes were often extensive cultivated fields. Town Creek Indian Mound, located in modern-day Montgomery County, is one North Carolina example of a mound that was at the heart of a town site built by Mississippian people.

Mississippian peoples also developed more formal systems of governance, called chiefdoms, and extensive religious rituals and ceremonies related to agricultural cycles of planting and harvest. One particularly important ritual was the Green Corn Ritual. This rite celebrated the ripened corn crop in the late summer and served as a period for village members to cleanse their environment and start anew on a personal and spiritual level. Typically, the Green Corn Ritual involved the cleaning of the council house and family homes, fasting, bathing, forgiving past wrongs, and the symbolic extinguishing of old fires and the creation of new ones. The Indians’ respect for their environment, and their vision of their community as grateful recipients of nature’s bounty, was shown through the destruction of accumulated foodstuffs from the previous year.

The chiefdoms of the Mississippian tradition came to dominate American Indian culture in the Southeast as the time of European contact approached, and differences between Mississippian and Woodland Indians almost certainly sparked conflict as cultures met in North Carolina and elsewhere. But scholars believe that many Woodland people simply adapted Mississippian practices over time. Other Woodland tribes likely moved to more isolated lands and maintained their cultural practices, sometimes reclaiming their traditional territories when Mississippian tribes themselves relocated to new planting grounds. Certainly European explorers, when they began to encounter the native people of North Carolina, found groups practicing both Woodland and Mississippian ways of life.

what were the Indians like before the Europeans came?

My friend in Poland told me

My friend in Poland told me his daughter is in kindergarten and they are "playing" American Indians. He asked if I had any ideas for a project they can do that will show how they lived. I am not sure what to share with him or what info 5yr old kids can understand. Do you have any idea what project I can suggest or what info to share with him? Thanks!

Hello, so I came here to find

Hello, so I came here to find a very specific answer and it's okay if you don't know (just tell me where you might think I can find it) but I saw something about how the First Nations recognized, before the Europeans came along, five genders existed and it was considered a gift to see the world from two genders (like gender fluidity in a way) I wanted to know if this is true. Thank you!

yes its true because they

thank you for tell us about

thank you for tell us about it.

Thank you for the article, do

Thank you for the article, do you have any info relating to the conflicts between Native American Indians?

Unfortuantely, NCpedia doesn't have a resource that substantially addresses your question. You may want to check with a local library for help with this question.

Additionally, there are a number of encyclopedic resources for American Indian history that might be useful.  Here are search results in WorldCat -- https://www.worldcat.org/search?q=encyclopedia+of+american+indians&qt=re... Worldcat searches the holdings of libraries around the world and you can see if a potentially useful book might be in a library near you.

I am doing a speech on

I am doing a speech on American Indian Family structure and was wondering if there is anything that I could get from you about it. If you could answer me that would be great. Thank you in advance.

That’s a very interesting topic. Unfortunately, we do not have anything in NCpedia that speaks directly to this topic.  I also suspect that there are many nuances to the topic depending on the time period you are interested in and for specific tribal communities.

If you are doing this for a school project, you may also want to consider talking to your school librarian for help.  Your local public library is also another good resource in addition to a university library if you are located near one.

I have also looked at WorldCat – which is an online catalog that includes the holdings of libraries all over the world.  You can search for a particular topic, browse books and locate those that may be in a library close to you.  If your library participates in interlibrary loan, you may also be able to have a book sent to your library.  I did find one book that was published in 2014, but I’m not sure what level you are looking for.  This book appears to be written for a juvenile audience:

Here are the results of my search in WorldCat -- https://www.worldcat.org/search?q=american+indians&dblist=638&fq=s0%3A66....  You may find some additional items of interest.

Finally, you may want to try searching on Google Scholar.  Google Scholar search results include scholarly articles and dissertations and you may find some recent work on your topic here.  Here are some search results from a basic text search on American Indian family structure: https://scholar.google.com/scholar?hl=en&q=american+indian+family+struct...

I hope this helps!  Good luck with your project and best wishes,