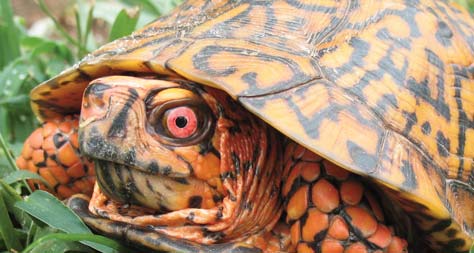 A straight-line carapace length of 5 to 6 in. Males often grow larger than females. 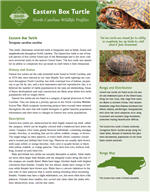 Berries, fruit, seeds, roots, flowers, mushrooms, grasses, carrion, and most any small animal they can catch including snails, slugs, frogs, toads, and birds.

Can breed spring, summer, and fall. Nesting occurs May through July with eggs hatching in approximately 60-90 days. Some hatchlings may overwinter in the

Hatchings are about 1 in. in length when they hatch from their eggs. Their shell shape differs from the adults by having a very prominent middorsal keel and an overall flattened, very round appearance. Hatchlings and young juveniles are typically solid brown or grayish, except for a pale lower jaw, with a single yellowish spot on each carapacial scute. The plastrons of young Eastern box turtles do not allow them to enclose completely in their shell.

Box turtles commonly live 25-30 years in the wild but have been known to reach ages of 40-50 years old. There are records of box turtles living over 100 years but

this is probably rare. 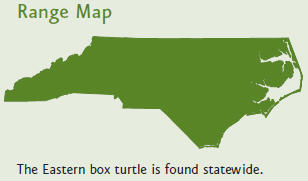 Eastern box turtles are found across the eastern and midwestern parts of the United States. Along the East Coast, they range from southern Maine to northern Florida. Their western boundaries range from Alabama northward into Illinois, Indiana, and Michigan. Intergradations with other box turtle subspecies occur along its western and southern range boundaries, sometimes making identification difficult.


The Eastern box turtle is found commonly throughout North Carolina except along the Outer Banks. Because of relatively few specimens documented, populations on the Outer Banks remain uncertain. 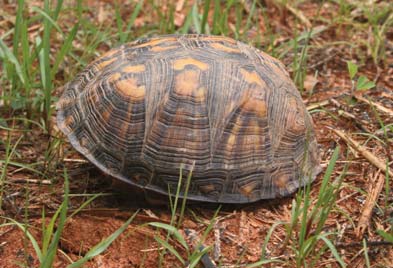 This small, charismatic terrestrial turtle is frequently seen in fields, forests and neighborhoods throughout North Carolina. The Eastern box turtle is one of four sub-species of box turtles found east of the Mississippi and is the most common terrestrial turtle in the eastern United States. The box turtle was named for its ability to completely box up inside its shell when it feels threatened.

Eastern box turtles are the only terrestrial turtle found in North Carolina, and in 1979 they were selected as our State Reptile. Box turtle sightings are common throughout North Carolina, but with continual loss of habitat, propensity to get hit by cars, and a slow maturation and low reproductive rate, it is believed the number of viable populations in the state are diminishing. Areas of heavy development and road construction are likely areas where box turtle populations will no longer thrive.


Eastern box turtles are not listed in a category of special protection in North Carolina. They are listed as a priority species in the North Carolina Wildlife Action Plan. Mark-recapture monitoring projects have recently been initiated throughout the state that will enable biologists to gather baseline population information and alert them to changes in Eastern box turtle populations.

Eastern box turtles are characterized by their highly domed top shell, called the carapace, which can be brightly colored with a middorsal keel down the center. Carapace color varies greatly between individuals, containing smudges streaks, blotches, or mottling that can be yellow, reddish, orange, or brown. The single hinge on their plastron, or lower shell, allows complete closure and is located just behind their front legs. Plastrons are usually dark brown with some yellow or orange blotches. Skin color is usually brown or black with yellow, reddish, or orange patterns. They have four toes, without webbing, located on each hind foot.


Male and female box turtles are sexually dimorphic as adults. Adult males are most often larger than females and the marginal scutes along the rear of the carapace are usually flared. Males have larger, blockier heads with brighter coloration than females. Usually, but not always, males have orange or red eyes while females have brown eyes. Males have a concave indention in the rear lobe of their plastron that is useful during breeding when mounting females. Females may have a slight indentation, too, but more often have a flat plastron. Females have smaller, less curved rear claws than the males who have distinctively stout, curved rear claws.

The Eastern box turtle can be found across the state and is most common in or near wooded habitats. Although a highly terrestrial species, during hot and dry weather, turtles will seek refuge in moist or shallow aquatic habitats such as flood plains, bogs, and swamps. They will often burrow beneath logs or damp vegetation. During the spring and fall months, box turtles can be found active throughout the day but during the heat of summer, they are most active in the morning and after rain showers. (Box turtles have been observed in every month of the year, but typically during winter months turtles will bury in the soil or leaf litter of the forest floor and become dormant until warmer weather.)


Aside from humans, adult box turtles have few predators. Raccoons, foxes, and skunks eat turtle eggs and young, and with persistence, have been known to penetrate through an adult turtle’s thick shell. Snakes, such as the Eastern kingsnake, will readily eat turtle eggs. Turtle nests are also susceptible to red imported fire ant attacks. As turtles emerge from the eggs, ants engulf and devour the hatchlings before they are able to leave the nest. Adult and juvenile box turtles are also at risk of attack due to their immobile predator reaction. As the turtle remains still, more ants are able to swarm around it and squeeze through small gaps of the closed plastron. 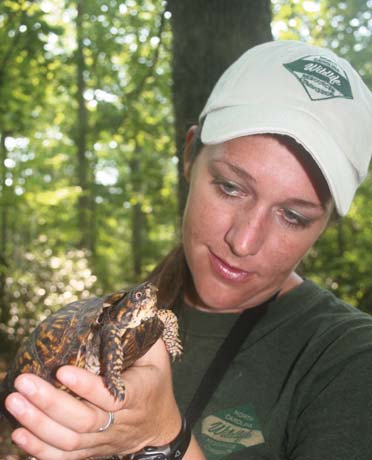 The Eastern box turtle is a well-known and admired reptile in North Carolina. Although still common across most of the state, it is believed that box turtle populations are declining in many areas. Habitat fragmentation and the building of roads are the main causes of box turtle mortality. Box turtles establish home ranges which contain a number of favorite food source locations, hiding spots, and turtle gathering locations. Turtles will cross roads to reach favorite feeding grounds each year. Since box turtles are long-lived and take up to 10 years to reach sexual maturity, road mortality can quickly eliminate populations. If care is taken, a box turtle can be successfully moved off of a road as long as the turtle is put on the side of the road it was heading towards. Because of their homing instinct, it is not advisable to move box turtles outside of their home range. Considered appealing by many, box turtles are commonly taken from the wild and kept as pets; however, since they can live more than 50 years, careful thought should go into this decision. Collection of wild box turtles can have severe impacts on local populations because those turtles are no longer reproducing in the wild.

N.C. biologists are concerned about declining numbers of box turtles in areas where they once were considered abundant. As a priority species in the N.C. Wildlife Action Plan, populations are closely monitored. In 2008, staff from several N.C. Universities, NCWRC, and State Parks, along with private landowners began a box turtle mark-recapture study to help monitor box turtle populations around the state. We could use your help, too. The Carolina Herp Atlas (http://www.carolinaherpatlas.com) is an online database available for anyone to log their box turtle sightings into. Photographs, location information, and other details that you include are then available for our biologists view and monitor regularly.

To log your Eastern box turtle sightings, photographs, and location information into our online database, go to http://www.carolinaherpatlas.org/

To see more photographs and to learn more about these turtles, go to www.herpsofnc.org/herps_of_NC/turtles/Tercar/tercar.html http://www.fcps.edu/islandcreekes/ecology/eastern_box_turtle.htm

Eastern Box Turtle (from the National Zoo in Washington DC)


Produced by the Division of Conservation Education, Cay Cross–Editor.

what type of birds do turtles

what type of birds do turtles eat?

my friends think box turtls are creepy i like them

Let us know what type of information you're looking for and we'll try to help. You may want to investigate the links in this entry.  Clicking on the blue text will take you to additional related information.