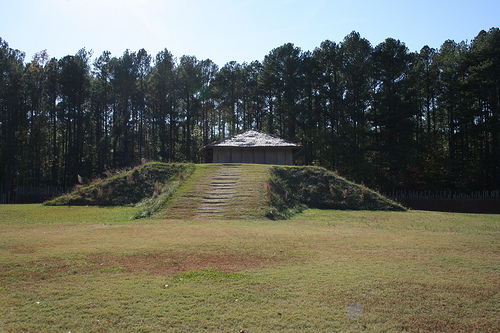 The nature of the specific burial customs that may have existed among the people inhabiting the North Carolina region prior to European settlement can only be guessed at based on the artifacts and burial sites that remain. Funerary mounds ascribed to the Mississippian, or Temple Mound Builder, culture (1000-1500 A.D.) remain in the central Piedmont, notably in the Catawba River Valley. Town Creek Indian Mound in Montgomery County is an example of a restored temple mound complex that includes a burial mound. While Mississippian natives are known to have buried their dead in cemeteries, mound burials were evidently reserved for the elite. Interments included elaborate grave goods, including pottery, weavings, beads, pipes, mica, and carved stone, and the deceased were placed in the fetal position or in a sitting position facing east.

In the Coastal Plain, low mounds known as tumuli were common. These are roughly circular, ranging from 15 to 40 feet in diameter and standing about 3 feet high. Tumuli often contain only bones, but sometimes also pot shards, charcoal, shell beads found in bunches near skulls and breastbones, and "killed" shell cups, their bottoms broken out upon the death of their owner presumably to prevent use by nonsanctified persons or to free the spirit of the cup to accompany the deceased. Bones are often found distributed throughout the mound. Few skeletons are found singly; oftentimes they are crowded one upon another. Skeletons are often in the fetal position.

European settlers brought to North Carolina their own burial customs and, with some variations, these remained the customs practiced through modern times. Prior to the wide availability of embalming, burials usually took place the day following death. In most communities throughout the eighteenth and nineteenth centuries, the corpse was never left alone during the wake period preceding burial, with family and friends "sitting up" through the night with the dead at home. The preparation, or "laying out," of the corpse was traditionally performed by neighbors, permitting the immediate family time to grieve. The corpse was stretched flat upon a hard surface, usually a cloth-draped board, sometimes called a cooling board. Sometimes this necessitated tying the body down or even breaking bones. The mouth was tied closed and weights (sometimes coins) were used to close the eyelids.

In some areas, especially among African Americans, plates of salt and ashes (thought to be a preservative and to absorb disease, respectively) were placed beneath the cooling board; both were later buried with the body. Bathing of the body, frequently limited to the extremities, was typically performed by the women and was accomplished using any of various materials such as lye soap, soda water, camphor, vinegar, or alcohol. Hair was seldom washed, but men's faces were usually shaved. Prior to the mid-1800s the dead were usually dressed in shrouds of black or white cloth, open at the back. Later they were dressed in their own clothing, often the deceased's favorite or "Sunday best."

Although embalming had been popularized by the tour of President Abraham Lincoln's body from Washington, D.C., to Springfield, Ill., the procedure was not introduced into western North Carolina until the turn of the twentieth century and did not become widely popular for another 50 years afterward. Funeral directors first became licensed embalmers late in the nineteenth century. In modern times embalming is the standard practice.

While women were sometimes buried with a flower in hand, large displays of flowers during the wake or burial ceremony were rare until recently. A wreath or small flower arrangement was sometimes hung on or near the front door of the home or business, a custom often observed still. Common superstitions, such as covering mirrors in the home of the deceased, or preventing very young children from viewing the corpse, are matters of folkloric record. In some towns, bell-ringing (tolling) provided notification of a death to the community; often the tolling communicated the age of the deceased. 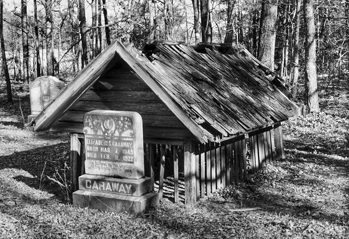 No coffins were used by early settlers; rather, a sheet (often linen or wool dipped in wax), a blanket, or a quilt was provided by women friends or family. Early coffins were fashioned out of hollow tree sections. Burials in the Appalachians went without coffins or caskets much later than elsewhere in the state. Woven burial baskets have also been known. Early wooden coffins were frequently beautified with paint or cloth on inside and outside surfaces, and coffin linings, typically quilts or inexpensive cloth, soon became commonplace. Coffins were built by the family of the deceased in early years, then by tradesmen, and finally by specialists. Metal coffins were introduced in the early 1800s, not without some protest, and by the 1900s (the 1930s or 1940s in the Mountains), durable metal caskets had become popular, as had coffins with elaborately designed handles, nails, and carvings. In the rural western part of the state, grave sheds, or grave houses, often complete with windows and rain gutters, were sometimes erected over the burial site. As church grounds became filled, perpetual-care cemeteries, both municipal and private, became the norm.

Despite its growing popularity in America since the first modern crematory furnace was perfected in 1873, cremation generally has never been the preferred burial method in North Carolina. This is likely due to scripturally based, JudeoChristian attitudes about the sanctity of the human body. The first crematory in North Carolina is thought to have been founded by Thos. Shepherd & Son Funeral Directors in 1970 at Shepherd Memorial Park in Hendersonville. Although still rare in Mountain communities, cremation by 2004 was provided by nearly 40 crematories in the state, and cremation was chosen in approximately 25 to 38 percent of all North Carolina deaths. Higher percentages occurred in locales where retirees are numerous, particularly among retirees who have migrated from the North, where cremation has long been available.

Most burial customs now practiced in North Carolina are essentially the same as those practiced elsewhere in the United States. These customs also exhibit a similar trend toward diminishing family cohesion and solidarity and a lesser role of neighbors in funerary procedures.