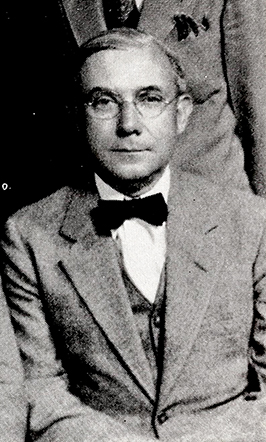 Benjamin Franklin Royal, physician, surgeon, and founder and chief of staff of the original Morehead City Hospital, was born in Morehead City, the son of John, Jr. (a railroad conductor) and Mary Franklin Royal. His mother was the daughter of J. R. and Harriet Pigott Franklin. The Royal family traces its North Carolina ancestry to Marmaduke and Sarah Royal, who lived in the Shackleford Banks–Harkers Island District in 1800. His paternal grandparents were John (keeper of the lighthouse on Shackleford Banks) and Caledonia Moore. John inherited fifty acres of Banks land from his father, Marmaduke.

Benjamin F. Royal was graduated from The University of North Carolina in 1906 and Jefferson Medical College in Philadelphia with an M.D. degree in 1909. He interned at the Methodist Episcopal Hospital in Philadelphia, practiced six months in Shelby, N.C., and began a lifelong practice in Morehead City in 1910.

Royal soon was taking care of the personnel at the isolated Coast Guard station in the area north and southwest of Beaufort. He opened Morehead City's first hospital in 1911 with seven beds. In 1918 he founded a new hospital with twenty-six beds. When influenza raged in Morehead City as elsewhere that year, Royal and his faithful nurse, Miss Edna Broadway, saw the community through the epidemic. In 1928 the town of Morehead City took over operation of Royal's hospital.

In 1942 the Atlantic Ocean off the North Carolina coast was a war zone as the Battle of the Carolina Capes raged. Altogether some 250 American and Allied ships were sunk by German U-boats with around 3,500 men from the ships in need of Royal's medical and hospital care. Many of these were burn victims from the flaming oil from sunken ships; it is said that Royal did not lose a single one of these patients.

In addition to practicing medicine, he was a leader in state, regional, and local civic affairs. Royal was a promoter of the North Carolina State Port, a member of the North Carolina Navigation and Pilotage Commission, a trustee of The University of North Carolina School of Medicine, a member of the State Board of Medical Examiners, and vice-president and president of the North Carolina Medical Society. He formally retired from his medical practice on 10 Apr. 1962. His hobbies were ornithology and wood carving. He died in a nursing home in Durham and was buried in Bay View Cemetery, Morehead City. Royal married Annie McTyeire Adams on 15 Oct. 1914. They were the parents of three children: Benjamin Franklin, Jr., who was killed in World War II, Florence F., and Ruth Adams.

Thank you for visiting NCpedia and taking the time to share your connection to Benjamin Royal with us.

Unfortunately, NCpedia does not have any additional information on Benjamin Royal that we have published in the encyclopedia.  However, here at the Government & Heritage Library we have librarians who are experts in researching family history as well as genealogy and local history collections.  Please visit this link for our contact information http://statelibrary.ncdcr.gov/contact.html.  You may contact our reference librarians by telephone or email or if you are in Raleigh, you may visit us in person.

Thank you and good luck in your research!

I was named by my parents,

I was named by my parents, Milton Webb and Elsie Willis Webb, in honor of Benjamin F. Royal, Jr. who was killed June 22, 1944 in the battle of Saipan, WW2. I have been researching his death and life and wonder if any of Dr. Royal's relatives are still alive. I know his burial place in Arlington, Section 12, Number 6752, but cannot find anyone that knows the circumstances of his death other than KIA. Any help would be greatly appreciated.

You must have a brother named

You must have a brother named Neil. I was friends with his daughter Laurie and her brother Mickey. I also grew up playing with Sammy Hughes Jr, on Fisher St. Your mother and father lived next door. I was recently talking with my dad about Dr. Royal. He and his wife resided at 1612 Evans, I attended St Egberts School across the street, and grew up at 1905 Evans. Dr. And Mrs Royal's home is now the St Egberts Rectory.

I am a newcomer to Morehead City, my grandmother was a Royal from Sampson County. I have recently become aware of the legacy of Dr. Benjamin Royal, and my research has led me to your inquiry. Please feel free to contact me.

we are doing family history

I am a newcomer to Morehead City. My grandmother was a Royal from Sampson County. I have recently learned of the legacy of Dr. Benjamin Royal. I am interested in any information on the Royal/Royal/Royall family. Please feel free to contact me directly. Michael Gooden,