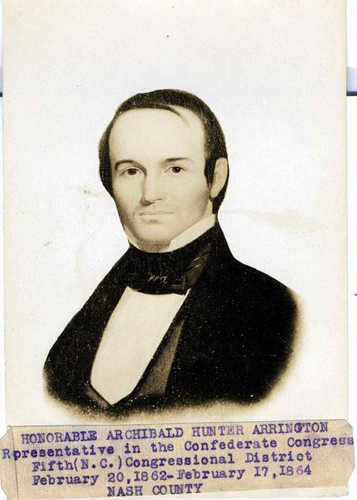 Archibald Hunter Arrington, planter, lawyer, and representative in the U.S. Congress and the Congress of the Confederate States of America, was born at the family home in Hilliardston on Swift Creek, about fifteen miles north of Nashville in Nash County. His mother, Elizabeth Nicholson, was the widow of Allen Mann; his father, John Arrington, was an influential and wealthy planter of Nash County who had served in the state senate and who, on his death in 1830, willed his three children, Samuel Lewis, Elizabeth Ann Williams, and Archibald Hunter, over sixty slaves and extensive property and money. A namesake and nephew, Archibald Hunter Arrington Williams, was a prominent figure in the state during the latter part of the century. Arrington—"Baldy," as he was affectionately called by friends and constitutents—was educated in the local schools of Nash County and at Bobbit's celebrated Louisburg Academy; he read law under Judge William H. Battle.

Although Arrington became involved in politics, his primary interest was the management of his estates and related commercial activities. While he remained in North Carolina to develop the family fortune, his older brother, Samuel Lewis, moved to Alabama, where the Arringtons had substantial interests. The two brothers remained confidants, regularly corresponding about business affairs, politics, family, and friends, and Arrington often made extended visits to Alabama to look after his interests there. His activities so enlarged the fortune left by his father that his estate was valued at over $300,000 in the 1860 census; he was one of the few agricultural entrepreneurs in antebellum North Carolina to possess over a hundred slaves. His personal life, characterized by a hospitable and industrious nature, a passion for blooded horses, and a strong consciousness of family ties, was typical of his class.

Even Arrington's engagement in government reflected an elitist sense of responsibility. While his legislative career was undistinguished, essentially passive and negative, he was an extremely able campaigner. Standing as a staunch Democrat when that party was very much in the minority in the state, he was elected to the Twenty-seventh and Twenty-eighth Congresses, 4 Mar. 1841–3 Mar. 1845. In 1840 he defeated the incumbent, General M. T. Hawkins of Warren County, in the Sixth Congressional District, and in a memorable campaign of 1842, he was successful against the seemingly invincible Edward Stanley. His bid to the Twenty-ninth Congress, after redistricting, was thwarted by J. R. J. Daniel in 1844. There was an attempt in 1858 to bring him into the gubernatorial election, but, following his own inclination and the advice of his nephew, Jonathan A. Williams, Jr., he demurred in favor of Duncan K. McRae. McRae, despite Arrington's counsel, was bested by John W. Ellis. Always a defender of southern rights, Arrington was a member of the state's secession convention. In 1861 he was elected to the First Confederate Congress for the Fifth District and performed workmanlike service on the Committee for Indian Affairs; he was defeated for reelection in 1863 by the belligerent antisecessionist Josiah Turner. His last major political service was performed as a delegate to the Union National Convention of 1866. Locally prominent, he was long the presiding justice for the court of pleas and quarter sessions in his county, and he was appointed a county commissioner following the 16 May 1868 act to better govern the former rebel areas.

Arrington's family ties attached both him and his brother closely to their Mann half-relations and extended into the Battle, Cooper, Drake, Williams, and Wimberly families of North Carolina. Arrington's first wife, Mary Jones Arrington (1820–51), was the daughter of Peter Arrington (1768–1837), purportedly the richest man in Nash County, and the mother of Mary Arrington Thorpe (d. 1883) and John Peter (b. 1851). Arrington's second wife, Kate Wimberly (1834–71), who was the daughter of Robert D. Wimberly of Edgecombe County, bore him nine children, of whom six sons lived to maturity.

Arrington was interred in the family burial plot at his plantation in Hilliardston. Presumably, his family still owns the portrait or copies mentioned in a will he prepared in 1858.

Thomas B. Alexander and Richard E. Beringer, The Anatomy of the Confederate Congress (1972).

Journal of the Confederate Congress (1905).

Visited Archibald H. Arrington's grave in an attempt to locate Nicholas William Arrington's grave. If Nick was buried in the same cemetery, their is not a stone to mark his grave. Does anyone know if Nick is buried there or is his resting place in a different location?

SAME HERE. THE ARRINGTON GRAVE SITE HAS BEEN CLEARED NICELY BUT THE IS NO GRAVE FOR NICK! ANY HINTS WHERE IT CAN BE?

My great grandfather was an

My great grandfather was an overseer on the Arrington plantation,Isaac Dudley Collier. Any information about that would be appreciated. The year was 1855.I think.

NCpedia does not have any information about Isaac Collier.

The NC Government & Heritage Library has collections relating to North History and family history research and you may wish to contact or visit the library to investigate the history of your ancestor.  You can find the library's contact information on our website at -- http://statelibrary.ncdcr.gov/ghl/index.html.  And here is the web page for Genealogy Services at the library -- http://statelibrary.ncdcr.gov/ghl/faq.html#genealogy.

A. H. Hunter's plantation and personal papers are in the Southern Historical Collection at the Wilson Library at the University of North Carolina (Chapel Hill) -- http://www2.lib.unc.edu/mss/inv/a/Arrington,A.H.html.  This collection may be of interest to you and may contain reference to Mr. Collier.  You'll also find contact information for the library on the site.

I hope this helps!  Good luck with your research!

I have been informed that

I have been informed that Archibald Arrington was my great-great-grandfather. One of his descendants was either William Thomas Tucker or Florence Tucker via slave population. Is there any way this can be documented? I would appreciate any help you are able to provide will be appreciated.

Thank you for visiting NCpedia and taking a minute to share your connection to this history and your question.

NCpedia does not have any additional information to address your question, however our reference and genealogy staff here at the Government & Heritage Library may be able to help you locate historical sources to help.  I am connecting you with them via email.

You can also find their contact information and information about our collections and services at http://statelibrary.ncdcr.gov/contact.html.

He as my great grandfather

He as my great grandfather also. My grandfather was Joseph Arrington in Nash Co who was married to Arlean Arrington of Hollister....Wow. Email me sometimes, it would be nice to meet you

We do have Archibald's

We do have Archibald's portrait hanging over our mantle in Wake Forest, NC! He was my g-g-grandfather.

Hi. One of Nick Arrington's

Hi. One of Nick Arrington's daughters married a Nick Harris. A son, David Harris, married a woman with last name Wadford. A daughter, Lessie Lee Harris, (my grandmother) married William Joe Melton, who is my grandfather. I am Randall Dean Melton, and I am tracing my family roots towards the Arrington family which is on my grandmothers side (Harris). Any connectivity info would be appreciated. As Archibald a son of Nick, the cocker? Sincerely, Randall Melton, Chesapeake Vanc

I am referring you via the email address you included in your post to Reference Services at the North Carolina Government & Heritage Library.  A librarian will contact you shortly to help, if you are still looking for information.