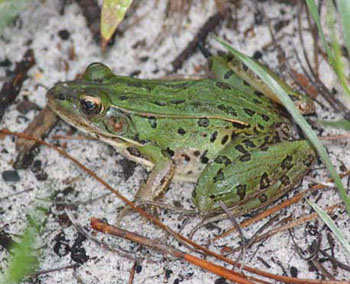 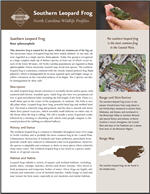 Most breeding takes place in winter and early spring, but leopard frogs may breed at almost any time of year. As with all other frogs, the male calls to attract a female. When he finds her, he grasps her waist with his forearms and fertilizes her eggs as they are laid. The female lays several hundred eggs in a firm, gelatinous mass, often attached to a stem or other object just below the water’s surface. Breeding frogs often congregate and lay many egg masses in a small area.

Eggs hatch in a week or two. Tadpoles feed on algae and other organic material and may grow to about 3 in. before transforming, after about 3 months.

Unknown. In the wild, the vast majority of leopard frogs do not survive their first year.

The southern leopard frog occurs in the eastern United States from Long Island to the Florida Keys; westward to eastern Texas, Oklahoma, and Kansas; and northward in the Mississippi Valley to northern Missouri and central Illinois and Indiana. In North Carolina it occurs throughout the Coastal Plain and most of the Piedmont but is absent from most of the Mountain Region.

The southern leopard frog is the most common frog in the Coastal Plain.

This attractive frog is named for its spots, which are reminiscent of the big cat. The taxonomic status of leopard frogs has been widely debated. At one time, all were regarded as a single species, Rana pipiens. Today this group is recognized as a large complex made up of distinct species, at least one of which occurs in each of the lower 48 states. All North Carolina populations are regarded as Rana sphenocephala. Future taxonomic research may reveal new species. The southern leopard frog is sometimes confused with the closely related pickerel frog (Rana palustris), which is distinguished by its more squarish spots and bright orange or yellow coloration on the concealed surfaces of its thighs. The 2 species can also be distinguished by their calls.

An adult leopard frog’s dorsal coloration is normally brown and/or green, with scattered dark brown, roundish spots. Adult frogs also have two prominent yellow or gold dorsolateral folds extending the full length of the body. There is a small white spot in the center of the tympanum, or eardrum. The belly is usually plain white. Leopard frogs have long, powerful hind legs and webbed hind feet. The head is relatively long and pointed, and the skin is smooth and moist. Males have paired vocal sacs, which resemble small balloons on either side of the throat when the frog is calling. The call is usually a series of guttural croaks followed by a clucking or chuckling trill, which some people compare to the sound produced by rubbing an inflated balloon.

The southern leopard frog is common to abundant throughout most of its range in North Carolina, and is probably the most common frog in the Coastal Plain. Urbanization, destruction of wetlands and water pollution, particularly from pesticide runoff, have reduced or eliminated some local populations. However, the species is adaptable and continues to thrive in most places where relatively clean water exists. The southern leopard frog is not listed as a species under threat or of special concern.

Leopard frogs inhabit a variety of aquatic and wetland habitats, including ponds, lakes, swamps, marshes, ditches and slower streams. They breed in both permanent and temporary bodies of water. These frogs are highly salt-tolerant and sometimes occur in brackish marshes. Adults forage on land and may venture far from water, especially in wet meadows and similar habitats.

Rather wary, these frogs active and powerful leapers, and they may be difficult to catch. When startled, an alarmed individual often emits an abrupt, shrill cry, which may serve to startle some predators. Southern leopard frogs are largely nocturnal and feed mostly on live insects, which they locate visually and catch with their large, sticky tongue. Like most other frogs, they appear to be attracted to and feed on moving prey. In addition, southern leopard frogs are important components in many food chains. Juveniles and adults are preyed upon by many creatures, including various mammals, birds, snakes, turtles, larger frogs and fishes. Eggs and tadpoles are also eaten by fishes, aquatic insects, salamanders, fishing spiders and other predators. Interestingly, southern leopard frog eggs will hatch earlier than normal when predators are nearby, which may help increase survival rates of frog offspring.

Throughout their range, leopard frogs are frequently encountered by people engaged in outdoor activities near water. Occasionally they may be collected as fish bait or as food for captive snakes and may also be taken as human food, but most specimens do not grow large enough to attract much attention from serious frog giggers. Children may enjoy catching these frogs and their tadpoles, but they are not particularly easy to maintain in captivity and do not make very good pets. During and after nighttime rainfalls, large numbers may be accidentally killed by motor vehicles when the frogs move onto roads and highways. Southern leopard frogs are more likely to be heard than seen, particularly in the late winter and spring, when the males try to attract females with their calls. The boisterous chuckling of a large breeding chorus of leopard frogs is an experience that no nature-loving person should miss. 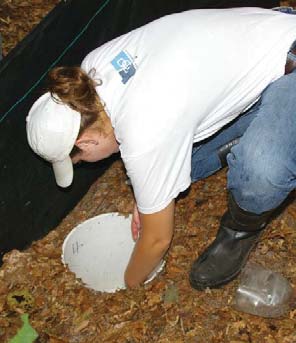 Southern leopard frogs can be monitored fairly easily in a variety of ways. One way is through frog call monitoring. The North Carolina Calling Amphibian Survey Program attempts to do just that by corralling data collected by volunteers across the state that monitors specific frog call routes.

Another way to monitor leopard frogs is through the use of drift fences. A drift fence is essentially a wall that most frogs cannot jump over. This technique captures frogs in either pitfall buckets or funnel traps and allows for estimates of adults entering ponds and juveniles and metamorphs exiting the ponds for dispersal later in the year.

We found one on our walk

We found one on our walk today. My kids had questions:
Do they play dead and how long and why?
Also, do they sleep during the day?
Do they close their eyes when they sleep?
Thank you.

Found this one jumping

That's quite a frog!

I'm not sure where you're located.  If you're in North Carolina, here are some resources from agencies and universities in North Carolina that you might find helpful.  You may also wish to contact the Department of Environment & Natural Resources if you need additional help.  If you live in another state, you may want to search the web for wildlife information specific to your state, contact your local library for help researching your question, or contact your state's wildlife agency.

Reptiles and Amphibians in your backyard (NC State University)  http://ncparks.gov/Education/docs/Reptiles-and-Amphibians-in-your-backya...

My goldfish pond has become

My goldfish pond has become home to southern leopard frogs. My question is ..do leopard frogs squeeze and kill eachother? I found one that had a herniated side under front leg. I know bullfrogs do as they killed my fish that way last year.

Interesting question! I am

Interesting question! I am forwarding it on to our reference department so they can assist you: http://statelibrary.ncdcr.gov/contact.html