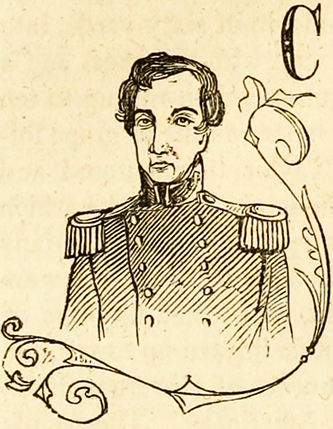 John Henry King Burgwin, U.S. Army officer and hero of the Mexican War, was born at the Hermitage, the home of his father in New Hanover County. Descended from a prominent Cape Fear River family, Burgwin was the eldest son of George William Bush Burgwin, a substantial planter, and his wife, Maria Nash, daughter of Governor Abner Nash. The Burgwins had played a prominent role in the affairs of North Carolina since the arrival of the progenitor of the family before the Revolution.

In 1811, Mrs. George W. B. Burgwin exchanged her plantation and slaves near New Bern for the lands and servants of her brother-in-law, John Fanning Burgwyn, of New Hanover County. According to the terms of the agreement, one plantation was settled on Maria Nash Burgwin and her children. However, the Hermitage estate, the ancestral home built by the first John Burgwin in 1753, was given to John Henry King Burgwin, who was only one year old.

Following preparation at local private schools, Burgwin was accepted as a cadet at the U.S. Military Academy at West Point on 1 July 1826. He was graduated from the academy on 1 July 1830 and appointed second lieutenant of the First U.S. Dragoons. Stationed on the frontier, Burgwin saw duty at Fort Des Moines, Iowa, Fort Leavenworth, Kans., Fort Wayne, Indiana Territory, Fort Gibson, Indiana Territory, Fort Towson, Indiana Territory, and Fort Croghan, Iowa. In addition, he went on several Indian expeditions, including those against the Towe-e-ash Villages (1834) and the Pawnee Villages (1844). He was also in the recruiting service for a time and provided water transportation for the naturalist and artist John James Audubon during one of his western tours. Burgwin was promoted to first lieutenant on 1 June 1835 and to captain on 31 July 1837.

With the beginning of hostilities with Mexico in 1847, Burgwin's regiment was ordered to present-day New Mexico. Shortly after their arrival, Colonel Sterling Price sent Burgwin and his command to dislodge a band of Mexicans holding a gorge leading to Emdubo. He found six hundred men posted on the steep sides of mountains above a pass that would admit only three men abreast. In the face of such overwhelming odds, he led a brilliant assault on 29 Jan. The Mexicans were repulsed with twenty of their men killed and sixty wounded, while Burgwin lost only one man. Marching through the pass, he occupied Emdubo and moved to Trampas, where he rendezvoused with Colonel Price. From there the U.S. forces marched to Pueblo de Taos, N.M., breaking a road through the snow covering it to allow the transport of artillery.

Reaching Pueblo de Taos, Price found that it had been heavily fortified. The stronghold was "surrounded by adobe walls and strong pickets, every part of which was flanked by some projecting building." Price opened fire with his batteries on 3 Feb. but retired shortly afterward. The following day the fire was resumed at nine o'clock in the morning. However, it was found impossible to breach the walls with the U.S. howitzers. Thereupon, Price decided to storm the church, which was situated in the northwestern corner of Pueblo de Taos.

Burgwin was given the task of leading the assault at eleven o'clock. While his men positioned themselves under the western walls of the church and attempted to make an opening with axes, the roof was fired, using a temporary ladder. Leaving the shelter provided by the wall of the church, Burgwin broke into the corral and attempted to force the main door. While doing so, he was fatally wounded when a rifle ball lodged in his chest. Shortly afterward Price rode up and told the wounded officer that whether he recovered or not, Price would testify to his gallantry. To this Burgwin replied, "I hope, Colonel, you will also bear witness that my company did its duty." He lingered for three days dying at Pueblo de Taos.

Initially buried at Fort Leavenworth, Kans., Burgwin's body was exhumed in 1848 and brought to North Carolina. During a public funeral in Wilmington, attended by thousands, prominent attorney Joshua G. Wright delivered an address. Afterward, Burgwin was buried at the Hermitage, the family plantation. In later years, Burgwin's and his parents' remains were reinterred at Oakdale Cemetery in Wilmington.

An Episcopalian, Burgwin was unmarried at the time of his death. He was engaged, however, to a "lady of great accomplishments," then living at Fort Leavenworth, Kans.

George W. Cullum, Biographical Register of the Officers and Graduates of the U.S. Military Academy (1891).

the mexican war began in 1846, not 1847. burgwin and his company g, 1st dragoons marched to santa fe in a squadron under command of capt. moore in early june 1846, never to return. when brig gen stephen watts kearny learned of fremont's bear flag republic in october 1846, he ordered burgwin to stay in new mexico, commanding a new squadron composed of companies g and i, 1st dragoons, in alubuquerque.

burgwin was not successful [tho it is couched as a success] at embudo, only forcing his way thru. the next day burgwin wisely moved back to the south and abandoned the direct route to taos, price and the american army avoiding the outraged new mexicans who resisted the u s army's march through their villages and looting of their homes. instead the army backtracked and then marched east, and finally north--several days of detours. NOT a "victory" except in the sense that burgwin forced a passage [price had been turned back, then sent burgwin in].

sort of true. burgwin was

sort of true. burgwin was beloved of his dragoons and his fellow officers. after his death from wounds at taos, his body was returned to santa fe and buried in a joint ceremony with other officers. in august 1847 his body was disinterred and returned to ft leavenworth, where it was buried with further ceremony, then removed to wilmington, where it was moved at least twice. burgwin's father was much upset at the failure of officers in new mexico to return his son's slave horace, who was passed around, eventually escaping during the last campaign of the war in chihuahua.