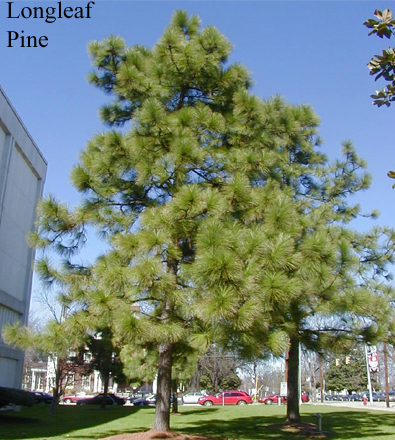 As early as 1959, the Garden Clubs of North Carolina had begun a campaign to name a state tree. At their 1962 meeting, a poll was circulated to the various member clubs, and the pine was the first choice.

Despite popular belief, no single species of pine is designated as the official tree of North Carolina. Many people believe that the longleaf pine is the state tree; indeed, many websites still list this species as one of North Carolina’s official symbols. This is probably due to the State Toast, which begins “Here’s to the land of the long leaf pine….” However, with eight species native to North Carolina (eastern white, loblolly, longleaf, pitch, pond, shortleaf, table mountain, and virginia), the 1963 legislature decided not to favor one at the expense of the other seven.

Nine other states (Alabama, Arkansas, Idaho, Maine, Michigan, Minnesota, Montana, Nevada, and New Mexico) have also designated the pine or a species of pine as their official state tree.

Being both fast growing and well adapted to sandy or acidic soil, the pine has become ubiquitous throughout the state. Land cleared for homesteading or farming was often deliberately replanted with pine, or allowed to revert to forest, with the opportunistic pine easily replacing other vegetation.

Pine is perhaps the most important type of wood in the construction industry, providing up to half of lumber and wood products required by the industry. Naval stores—turpentine, pitch, rosin, and tar—were also harvested from the great pine forests, and, up until the 1860s, North Carolina provided the bulk of these supplies to US markets.

AN ACT TO ADOPT AN OFFICIAL  STATE  TREE  FOR THE   STATE OF  NORTH   CAROLINA.

WHEREAS, the Pine is prevalent, in one of its eight species, in all parts of this State, and is truly representative of the State's historic dependence upon and concern for its timber and forest resources;  and

WHEREAS, there is great demand from all parts of the State that this Legislature adopt an official  State tree;  and

WHEREAS, the Garden Clubs of North Carolina have conducted a State-wide survey for preference for a State tree, and the Pine was selected by a decided majority of the votes;  Now, therefore,

Section 1. The Pine is hereby adopted as the official State tree of the State of North  Carolina.

In the General Assembly read three times and ratified, this the 12th day of March,   1963.

When did the Pine Tree get

When did the Pine Tree get found?.

I hope this site will help you, take a look under the heading "Evolution of Pine Trees". https://basicbiology.net/plants/gymnosperms/pine-trees#:~:text=Pines%20a....

You are welcome. And can you

You are welcome. And can you tell the people who made this website that i said thank you for making this website.

Yes and so glad it has helped

Yes and so glad it has helped you!

This Is The best website to help with my project.

We are so glad NCpedia could

We are so glad NCpedia could help you and thank you for letting us know!

This Passage is very helpful.

This Passage is very helpful. We are doing a class project for North Carolina symbols so we will keep going on NCpedia. Thank you for making this website.

I don't understand why Oregon

I don't understand why Oregon isn't in the list. Oregon has many pine trees. Probably mostly pine trees.

oregon doesn't have the pine

oregon doesn't have the pine as their state tree

I have a project due Thursday