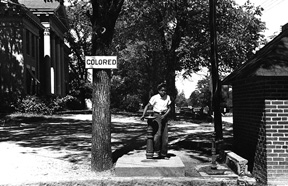 After the Civil War ended in 1865, the South entered a period that historians sometimes refer to as the era of the "New South." But in some ways, the New South was very similar to the Old South of the pre–Civil War years. North Carolina was no exception. In the Tar Heel State, conservative whites asserted their political, social, and economic authority in the late 1800s. The Civil War had ended slavery, but some Southern whites wanted to maintain control over the nonwhite population. Consequently, the North Carolina General Assembly passed a series of new laws that denied nonwhites political equality. For example, the state government took away this group's right to vote. The North Carolina government also passed laws that divided all citizens into two racial categories: white and "colored." Known as "Jim Crow" laws—which were named for a stereotypical black man in a song-and-dance show of the time—these new rules made racial segregation legal in North Carolina. All public facilities, such as restrooms, restaurants, theaters, train cars, and schools, had to be racially segregated, or divided. For example, white citizens would use one restroom, while colored citizens had to use a different one. White children would go to one school, and colored children would go to another one. In 1896 the U.S. Supreme Court ruled in a famous court case, Plessy v. Ferguson, that racial segregation was constitutionally fine as long as the facilities were "separate but equal." In North Carolina, however, "equal" was rarely the case. White facilities, such as restrooms and schools, were usually much nicer than "colored" facilities.

In general, racial segregation meant "white" and "colored." But what did the term colored mean? Most people in North Carolina at the time assumed that the term referred to African Americans. However, there were more than two racial groups living in North Carolina in the late 1800s and early 1900s. In the western part of the state, the Cherokee lived on a federal reservation in the Great Smoky Mountains. In eastern North Carolina, several thousand more American Indians lived in small isolated communities in several counties—Robeson, Sampson, Halifax, and Columbus, among others. Under segregation, which divided all North Carolina residents into two racial groups, American Indians living in the eastern part of the state faced a problem. They could not use white public facilities, yet they did not want to use colored facilities. Jim Crow allowed for only those two choices. American Indians worried that if they used colored facilities, they might lose their separate racial and cultural identities. To them, the category of colored was much too large and ignored the diversity among North Carolina's nonwhite citizens.

Rather than accept this segregation, American Indians in eastern North Carolina fought against the system by trying to create their own racial and cultural category. One way of achieving this was to start Indian-only churches. Before the arrival of Europeans in the late 1500s, most Indians in the region practiced their own traditional religions. After being influenced by missionaries and preachers, however, many Indians living in the eastern part of North Carolina had converted to Christianity by the late 1800s. Most became Baptists or Methodists. American Indians were barred from attending white churches, though, and they did not want to attend African American churches. They began building their own Protestant churches. For example, Indians in Robeson County founded Union Chapel, Thessalonica, Saddletree, Prospect, and Sandy Plains churches. In Sampson County, Indians opened New Bethel Baptist and Beaver Dam. This idea quickly spread to other communities. American Indians founded, financed, and built these churches themselves. 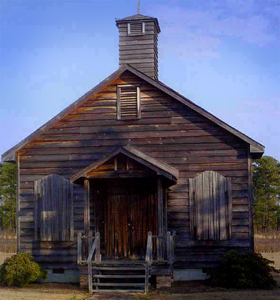 As the number of American Indian churches in eastern North Carolina began to grow, the two most numerous sects, the Methodists and the Baptists, began to form religious groups. In the 1870s, several Indian churches in the Robeson County area formed the Burnt Swamp Baptist Association. Burnt Swamp was the first documented Indian religious organization in North Carolina. In the late 1800s, Indian Methodist churches also formed their own religious group. After an internal dispute, it split into the North Carolina Conference of the Methodist Church and the Holiness Methodist Conference.

Naturally, American Indian churches in eastern North Carolina served a variety of religious purposes. But these churches also played important social roles in most Indian communities. In fact, churches were often the only public buildings in the communities. Churches hosted numerous secular, or nonreligious, events such as family homecomings and picnics. In addition, the buildings were often used as Indian-only schools during the week. Churches also served as social safety nets in Indian communities. If individuals or families fell upon hard times, they could go to their local church and ask fellow members for help. This aspect was very important for many Indians in the early 1900s, since they had few other choices for assistance.

By the year 2000, around 100,000 American Indians lived in North Carolina. Most remained Baptists and Methodists. Indians in eastern North Carolina largely still worship in small- and medium-sized community churches, though these churches are also open to non-Indians. Several of the churches are very old, dating back to the early 1900s. Such churches helped American Indians in eastern North Carolina protect their unique identities during a time when Jim Crow racial segregation threatened to destroy a culture and a people older than the state itself.

At the time of the publication of this article, Dr. Christopher Arris Oakley was an assistant professor in the Department of History at East Carolina University. In 2005 the University of Nebraska Press published his book Keeping the Circle: American Indian Identity in Eastern North Carolina, 1885–2004.

Hi, I am working on a

Hi, I am working on a children's museum for Morehead City and am interested in Coree Indians. Can you point me in a direction that I could find additional information?

Thank you for visiting NCpedia. There are few articles on NCpedia (https://ncpedia.org/gsearch?query=Coree+Indians) related to the Coree Indians. I also recommend contacting The Museum of the Southeast American Indian (https://www.uncp.edu/resources/museum-southeast-american-indian) museum as another reference.

Good morning,
We are studying the Native American tribes of NC. I would love to chat with someone who is a Native American and who is also of the Christian faith. Do you happen to know where I should start researching a contact?
Thank you,
Mary Pohlman

Thank you for visiting NCpedia and for sharing your reaction to this article.

I'm sorry it was not helpful. If you are looking for something specific or other information, please let us know and we will try to help you locate it. Feel free to post back here or create a new comment.