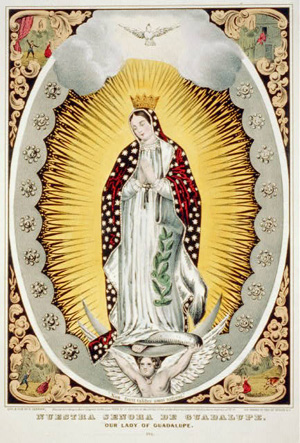 Hundreds of thousands of Latin American migrants have settled in North Carolina in the last twenty years. Like many earlier waves of people arriving from England, Africa, Germany, and other places, they brought traditions with them. Images of the dark-skinned Virgen de Guadalupe appear on many T-shirts, trucks, candles and food products. Honoring her in many creative ways helps immigrants stay in touch with the blend of Indian spiritual and Roman Catholic religious traditions that she represents. The Virgen de Guadalupe has her own special day, December 12. On that day in 1531, believers say that she first appeared on Earth. She spoke to a peasant named Juan Diego on a hilltop near Mexico City, telling him that she was the mother of Jesus Christ. She asked Juan to build a church on the spot. Miraculously, believers say, the woman’s image appeared on Juan’s clothing when he went to tell other people what he had seen.

For more than ten years, dancers of all ages have gathered each December in a neighborhood on Durham’s east side to perform a ceremony of their devotion to the Virgen de Guadalupe and the ideals that she stands for: love, beauty, and community. Dancers practice complicated footwork for months to prepare for the celebration’s centuries-old greeting. On the evening of December 11, they get together in the parking lot of a crowded apartment complex to prepare for a long night of dancing. Ivan, a fifteen-year-old dancer, said, “I don’t get tired when I am dancing for her; I keep her close to my heart.” After dancing all evening, Ivan and his friends will go across town for a special early-morning Mass, or Catholic church service. Some dance in the church celebration, as well as in the neighborhood event.

In Mexico, dancers who honor the Virgen de Guadalupe on her special day are almost always boys and men. The tradition has been adapted in North Carolina so that girls and boys (as well as men and women) learn the footwork. They use this community celebration as a way to create a new “sense of place” in an environment that can be unfriendly to immigrants. A devil figure, or an old-man character, plays an important role in these matachine dances, or celebratory dances that draw upon native Mexican as well as colonial-era Spanish traditions. The devil dancer keeps time with the music and makes sure the other dancers stay in an exact formation of two lines. The devil dancer does silly, unexpected things but also creates fear with a scary appearance and a quick scolding when someone misses a step.

Making costumes for the matachine dancers requires many supplies, such as colorful sequins, cloth, ribbons, and glue. Each costume takes about one hundred hours of sewing, according to Maria, the mother of a teenage dancer and two other children. “This year, we decided to make a larger pattern with an image of the Virgin that fills up the center of the cape,” she said. “We sewed gold fringe along the edges.” Maria and her husband organized the first celebrations in their neighborhood because they were “so grateful to all be safe—and all together—in Durham” after moving from Mexico. 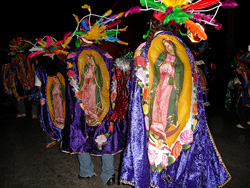 In addition to creating costumes, people collect and put together feathered headdresses, percussion instruments, warrior shields, conch-shell trumpets, and other items for the dancers. Octaviano, a leader of the Durham dance group, explained that members made maracas (percussion instruments) from four-inch toilet bowl floats by drilling a hole in each float and inserting ball bearings. A handle is attached to the float and decorated with long fringe and colorful markings. The maracas make a satisfying noise when shaken. As with the costumes, migrants creatively substitute materials and adapt the expressive traditions they brought from Mexico and elsewhere in Latin America.

A few weeks before December 12, a different kind of celebration begins near Mexico City at the Basilica, a church built at the site where the Virgen de Guadalupe first appeared. This event is a long-distance relay run called the Antorcha Guadalupana. It symbolizes the connections among communities in the United States and Mexico. Teams along the 3,800-mile route from Mexico City to New York City run with a blazing torch and a large painting of the Virgen de Guadalupe, passing these along to the next team. Like matachine dancers, runners display intense devotion and deep concentration.

Celebrations of the Virgen de Guadalupe in North Carolina have powerful effects for immigrants and their children. They create a sense of place, as well as links to the past. For some young people with family members in North Carolina and in Mexico or Central America, these events provide a connection between faraway communities. The yearly neighborhood celebration in Durham represents a creative effort involving music, dance, food, and costume-making. People who no longer live in the crowded apartment complex where the event takes place return there for it, because of the feeling of being part of a family, community, and network of caring friends. The Durham group has inspired other traditional dance groups to form in Raleigh and other places in central North Carolina.