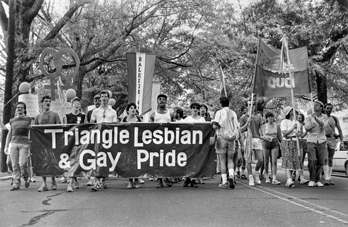 Until the final decades of the twentieth century, the personal lives of gay and lesbian people in North Carolina were shrouded in silence. While homosexuality certainly existed in the state, talking about it was generally taboo. Being a homosexual required caution because North Carolina's statutes contained a prohibition against sodomy. Conviction for a "crime against nature" could result in a fine and possibly a jail sentence. It is likely that the sexual preferences of many gays and lesbians were known to their closest friends and acquaintances, but a brand of the "don't ask, don't tell" rule existed.

While attitudes about sexuality in general and homosexuality in particular began to liberalize slowly in the United States after World War II, little change was evident at first for gay and lesbian people in North Carolina. Acceptance of openly gay and lesbian lifestyles might have been possible in larger cities elsewhere, but in North Carolina's cities, which lacked both size and diversity, accommodation of homosexual communities was slow in developing. Nevertheless, social attitudes and religious mores that marginalized homosexuals and even advocated violence against them surely did not prevent the state's gay and lesbian people from developing significant relationships or expressing their identities. In some cases, these identities were hidden in plain sight; in communities where the terms "gay" or "homosexual" were never spoken or even considered, people may still have whispered about "confirmed bachelors" or unmarried women rumored to be "queer."

Not until the late 1960s and 1970s did a significant number of gays and lesbians in North Carolina find that "coming out" was an option available to them. In time, bolstered by the openness and activism of gay and lesbian communities in cities such as San Francisco and New York-scene of the 1969 Stonewall Riots, which are usually viewed as marking the beginning of the modern gay rights movement in America-southern homosexuals also began to make themselves known. This led to the most significant change in the history of gays and lesbians in the state-open discussion of the subject of homosexuality. One bibliography lists some 6,000 items about homosexuality published in North Carolina newspapers since 1995.

During the 1980s and 1990s, the state's gay and lesbian citizens demanded protection against discrimination in the workplace and elsewhere; insisted that their relationships have equal standing with heterosexual relationships in the areas of family law, taxation, and insurance benefits; and battled legally as well as vocally for other civil rights. While the AIDS epidemic, which first came to light in the state and nation in the 1980s, had a significant impact on North Carolina's public health during this period, the effects of the disease for the state's gay community were particularly profound. While newfound attention has given the average citizen a greater awareness of the presence of gays and lesbians, it has not necessarily led to increased tolerance. Southerners, in general, have been slower than most Americans to accept open homosexuality, and North Carolinians have not deviated from that pattern.

Nevertheless, gays and lesbians in North Carolina continue to press for social acceptance and for civil rights. One key focus is the area of statutory law, where they have sought legal recognition of same-sex unions. Other efforts have focused on modifying the state's laws against consensual sodomy, in light of the U.S. Supreme Court decision in Lawrence v. Texas (2003) making such laws unconstitutional, and on passing anti-hate crime legislation that would criminalize violence targeted against victims due to their sexual orientation. A variety of judicial challenges to local and state codes have also been mounted where gay rights advocates view them as discriminatory. Overall, however, the legislative and judicial climate in North Carolina has remained unfavorable for these efforts.

Despite legal obstacles and persistent social and religious opposition, thriving communities of gay and lesbian people now exist in the state's largest cities and many smaller towns. Although relatively few openly gay or lesbian candidates have won political office, in 1995 Michael R. Nelson became North Carolina's first openly gay mayor, when he won election in Carrboro. Some businesses and institutions, as well as some of the state's cities and counties, give partners in same-sex unions benefits if they are applied for, but there is no uniformity about conferring such benefits. Same-sex unions may be performed in the Duke Chapel and at Wake Forest University's Wait Chapel for persons connected with those universities, and some of the state's Protestant denominations have also allowed same-sex commitment ceremonies to be held in their churches, following a nationwide trend. While churches have generally refused to ordain openly gay clergy, in the fall of 2000 the new Wake Forest Divinity School in Winston-Salem began to admit homosexuals.

Almost any public announcement about the activities of gays and lesbians generates correspondence on the editorial pages of North Carolina's newspapers. In 2000, for example, a front-page article in the Greensboro News and Record about the adoption of twin Vietnamese boys by a homosexual couple led to a jousting match of correspondence in the paper. While one letter stated that "the Bible does condemn homosexuality," a response suggested that "love makes a family [and] families come in all configurations." As such debates suggest, while North Carolinians have begun to speak openly and often about homosexuality, any full reconciliation of opinions will not come easily.