"The Loss of a Town" 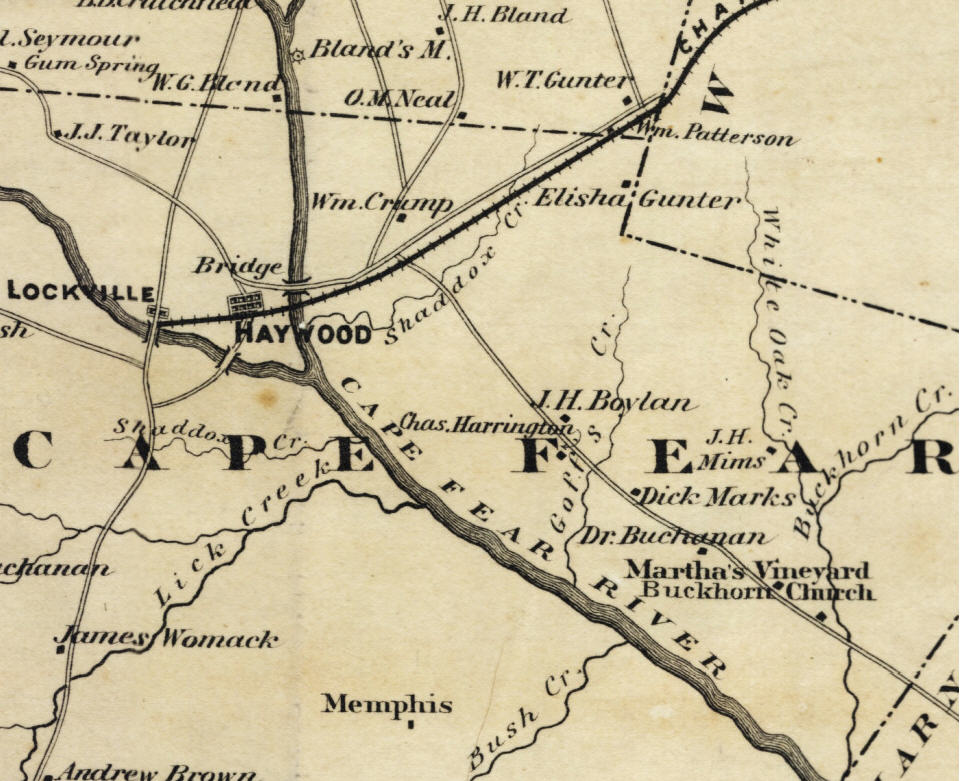 The area where the Deep and Haw rivers join to form the Cape Fear River was once the site of the town of Haywood. The town, established in 1796, was named for state treasurer John Haywood (1755–1827). An Edgecombe County native, Haywood served as state treasurer for forty years, from 1787 until 1827. It was hoped that the town would become a major inland port. Although that never happened, and the town eventually disappeared, people still remained to call Haywood home.

The area was proposed as the location for the permanent state capital and the home to the University of North Carolina. Thomas Person, a delegate from Granville County, nominated the “fork of the Haw and Deep Rivers” at the 1788 constitutional convention meeting in Hillsborough. However, the convention chose a site in Wake County that would become the city of Raleigh. In 1792 the committee charged with finding a home for the new state university was offered money to pick the junction of the two rivers as the place for the new school. But it chose “New Hope Chapel hill” (now Chapel Hill), instead.

In 1796 the General Assembly chartered the Deep and Haw River Navigation Company, later renamed the Cape Fear Navigation Company, to improve the upper Cape Fear River for boat travel, and to establish a town at the site where the Haw and Deep rivers joined. Originally, the new town was to be called Lyons, probably in honor of the French city of Lyon. The following year, the legislature changed the name to Haywoodsborough. In 1799 John Lindley surveyed the land and created a town plan with 294 lots. Wealthy men, including Governor Benjamin Williams and state treasurer John Haywood, purchased the first lots in February 1800. Many buyers hoped to make a fortune from reselling the lots once river traffic started going to and from Haywoodsborough. During 1800 the legislature shortened the town’s name to Haywood.

Over the next decades, Haywood’s fate was tied to navigational improvements to the upper Cape Fear River. Boats made it to Haywood. In May 1800 the Haywood Packet traveled from Wilmington to what was then Haywoodsborough. The trip began on May 10 and ended on May 21. During the voyage, it rained every day except one, making the trip a third longer than usual. Boats that made the trips to the town likely benefited from the navigational enhancements. However, successful trips also required the right water conditions. Despite the successes of some boats and the formation of a transportation company, the prospect of future navigation on the upper Cape Fear dimmed in 1834. In that year the Cape Fear Navigation Company declared its desire to give up its rights on the Cape Fear above Fayetteville to any company willing to improve the river.

In 1849 the General Assembly incorporated the Cape Fear and Deep River Navigation Company to make possible the necessary navigational improvements. It was hoped that transporting coal from Chatham County would provide the necessary income to make the Cape Fear and Deep River Navigation Company profitable. The new company built dams and locks. In May 1856 the John H. Haughton brought the first Chatham County coal downriver. In the end, the dream of an inland port at Haywood never came to full fruition due to insufficient income from shipping, and to the Civil War, which stopped any navigation work projects. Finally, railroads brought an end to inland shipping on the upper Cape Fear River.

During the antebellum era (the period in American history before the Civil War), Haywood experienced growth, with businessmen, craftsmen, and farmers calling it home. An academy and a Presbyterian church were built in the town. During the Civil War, Haywood was not the site of any battles, but in April 1865 Union soldiers occupied the town for one day.

During Reconstruction, life in Haywood changed dramatically. For a time white and black members of the Union League, a support group of the Republican Party, met at the academy. In the summer of 1870, blacks and whites even shared a polling place. African Americans established a school that was attended by Haywood native Simon Green Atkins (1863–1934), founder of Winston-Salem State University. However, the town, like the rest of Chatham County, suffered from problems caused by the Ku Klux Klan. Yet Haywood survived, and people established businesses such as hotels and general stores, but the town remained small.

Haywood struggled in the late 1800s to remain a functioning town. Contributing to its decline was the decision not to bring the railroad directly to the town. The decision was made to build a station and switching yard north of Haywood, leading to the creation of the town of Moncure.

Over time, the businesses disappeared, but the number of people living in the town remained stable. The General Assembly rechartered the town in 1905, providing for a more modern government. In 1907 the town commissioners approved the construction of a telephone system. Unfortunately, the town government, like the businesses, disappeared. By the mid-1900s, Haywood no longer had an active local government.

Eventually, time took a toll on the pre–Civil War structures in the town. The Haywood Church is the only building that remains from those bygone days. Nature overtook many structures, creating woodlands, while farmers reclaimed the land for their crops. Yet people remained in the area, allowing the population of Haywood to remain stable over the years. In fact, it continued to grow but not dramatically.

Today, only a green highway sign will tell anyone that Haywood was once the name of a town that had grand dreams. It is now a quiet place with fields, forests, and houses, including new ones. But it has always been a place that people called home.

Thank you very much with

Thank you very much with providing information about Haywood Chatham County NC. I found it hard to find any information at all online until I ran across this page on the internet. The article was well done and I'm glad I found out exactly why the town died!

I really enjoyed reading about the hopes and dreams of the Haywood people in that area and wished that Haywood river port was still an active port with a steamboat tourism attraction to this day!

P.S By chance any developer interested in doing something there I'm willing to volunteer my time there on the weekends to help the Haywood dream continue.
Let me know if that ever happens.