"A Foreign Field that is Forever Changed"

In 1939 World War II began, with Allied nations such as Great Britain and France fighting Axis nations that included Germany and Japan. The United States lent ships and supplies to Britain but did not officially join the Allies until after Japan’s bombing of Pearl Harbor, Hawaii, in December 1941. Germany soon targeted American ships with its U-boats. (“U-boat” comes from the German word unterseeboot, meaning “under sea boat,” or submarine. U-boats spent most of their time on the surface but submerged underwater for short periods during battle or when threatened.) Adolf Hitler, Germany’s dictator, sent U-boats to sink merchant ships and disrupt important shipping lanes from New England to Florida.

In January 1942 German U-boats began several months of successful attacks. During two weeks of January alone, they sank forty ships in the North Atlantic. The ships were so easy to destroy, the Germans called their mission the “American Turkey Shoot.”

Although their nation was at war, many North Carolinians and other Americans along the Atlantic coast continued life as usual. Few civilians turned off lights at night. Ship crews talked openly over radios about routes and patrols. U-boat captains just listened to the radio and shot at ships outlined by shore lights. 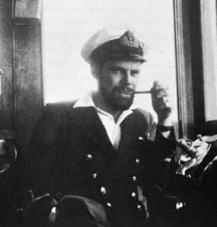 By February 1942, the U.S. government realized that it needed help with the U-boat problem. England lent twenty-four antisubmarine ships, one of which was the HMS Bedfordshire. The Bedfordshire, 174 feet long with a crew of thirty-seven men, arrived in Morehead City in April 1942. One of its officers was Thomas Cunningham. Many locals soon knew him on sight because of his full, black beard.

Britain’s antisubmarine ships often put themselves in danger. One, San Delfino, was lost near Cape Hatteras that April, and four bodies were recovered. The U.S. Navy’s Aycock Brown, in charge of identifying bodies recovered at sea, asked Cunningham for four British flags—or “Union Jacks”—to drape over the coffins. Cunningham gave him the four flags plus two extras.

On May 11, U-boat 558 spotted the Bedfordshire patrolling the waters off Cape Lookout. The German captain sank the ship with his third torpedo. There was no call for help, and there were no survivors.

No British authorities or Americans knew about the attack until two bodies washed ashore on Ocracoke Island three days later. When Brown arrived, he immediately recognized Cunningham’s body. A local family donated a plot of land next to its own cemetery, and the two men were laid to rest, with Brown’s extra Union Jacks across their coffins. A week later, locals found two more bodies, wearing sweaters from the Bedfordshire. They were buried alongside their shipmates in the new cemetery.

One Bedfordshire crewman did not die off the coast of North Carolina. On shore leave in Morehead City, Sam Nutt was out late May 10 and missed the ship when it sailed the next morning. He boarded another British vessel and chased after the Bedfordshire. But when he arrived at the rendezvous point, his ship wasn’t there. British officials did not list the Bedfordshire as missing until May 16. Ocracoke’s citizens knew it had sunk before the British navy did.

Various American and British groups have cared for the graveyard. Grateful Americans officially deeded the land to the British government. Today the U.S. Coast Guard maintains Ocracoke’s British Cemetery, a small plot with four graves surrounded by a white picket fence. The Union Jack flies over the site. A plaque reads:

If I should die think only this of me:
That there’s some forever corner
Of a foreign field that is forever England.

The U.S. Navy and Coast Guard, and local Protestant and Catholic clergy, held a memorial service in December 1942 for four British sailors buried in Ocracoke.  Image courtesy of the State Archives, North Carolina Office of Archives and History.

*Dr. Shepherd W. McKinley teaches North Carolina history and other American history courses at the University of North Carolina at Charlotte. He is the coauthor of North Carolina: New Directions for An Old Land (2006). Cynthia Risser McKinley is a children’s author whose work has been published in Faces, Cobblestone, Appleseeds, and Highlights magazines.