Representatives to the Constitutional Convention

After the Revolutionary War some members of Congress, called Federalists, wanted a new constitution that created a strong central government. Others preferred a government in which individual states were strong and independent. North Carolinians played an active role in defining the direction and future of the United States. Five Tar Heels--William Blount, Richard Dobbs Spaight, Hugh Williamson, William Richardson Davie, and Alexander Martin--served as delegates to the Constitutional Convention of 1787, although only three ended up signing the document. Davie was called away on personal business and never returned. Martin left Philadelphia in August 1787 before the final draft was completed. Here are some interesting facts about the North Carolinians who did sign the U. S. Constitution: 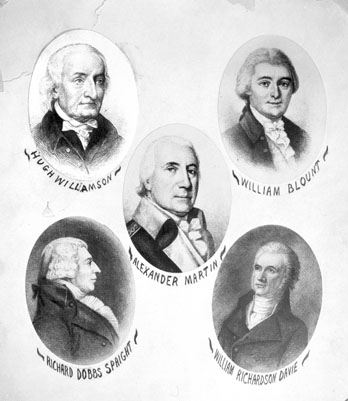 Blount (1749-1800) was the only founding father from a family with long ties to North Carolina. His great-grandfather, Thomas Blount, came from England, settling in the state sometime after 1660. According to most accounts, William Blount did not actively participate in the convention and signed the Constitution only reluctantly, to help ensure its adoption by all thirteen states. After settling in Tennessee, he was elected to the U.S. Senate in 1796--only to be impeached by the House and dismissed by the Senate because he took part in a plot to help the British capture the Spanish colonies of Florida and Louisiana. Blount later served as governor of Tennessee, and he is buried in Knoxville, Tennessee.

Spaight (1758-1802) was born in New Bern but orphaned at age eight. Sent to Ireland to be educated, he returned to North Carolina in 1778 and quickly became active in the state militia. He left the military in 1781 after being elected to the legislature. In the years after the Constitutional Convention, Spaight would become North Carolina's governor and a congressman. He suffered a fatal wound in a duel with John Stanly, a political rival. His death shocked the state, and as a result, the General Assembly outlawed dueling in North Carolina.

Williamson (1735-1819) was a brilliant scholar whose studies and writings covered a wide range of subjects. Born in Pennsylvania, he entered the College of Philadelphia at age sixteen and earned several degrees. He became a licensed Presbyterian preacher, a professor of mathematics, and a physician following studies in England and Holland. After witnessing the Boston Tea Party in 1773 on his way back to Europe, Williamson warned members of the British government that the colonies would rebel if the English did not change their policies. In 1776 he returned to help support the American colonies and eventually settled in North Carolina. As surgeon general of the North Carolina militia, Williamson tended to American and British troops. He prevented the spread of disease using modem methods---carefully examining personal hygiene, nutrition, clothing, and shelter. After the Revolutionary War, he was elected to state office before being chosen as a delegate to the Constitutional Convention. There, he proved to be a skilled speaker and an important and dedicated participant, serving on five committees. Williamson later worked toward the Constitution's approval in North Carolina. In 1793, after ending his public service career, he moved to New York City and published many writings about politics, education, economics, history, and science.

Resources from the Library of Congress on the US Constitutional Convention may be found online at http://www.loc.gov/rr/program/bib/ourdocs/Constitution.html