Representatives to the Continental Congress 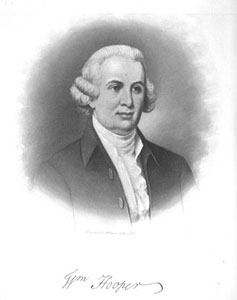 During the difficult times of the 1770s, the American colonies struggled with the issue of independence from Great Britain. Starting in 1774, the thirteen colonies sent representatives to Philadelphia, Pennsylvania, for a special meeting. They formed a group called the Continental Congress. After months of debating and trying to resolve their differences with the English government and King George III, the leaders of the colonies decided to declare their independence in July 1776. Joseph Hewes, William Hooper, and John Penn represented North Carolina. The next month, they--along with fifty-three other men--officially signed the Declaration of Independence. The three men worked closely with some of the most famous names in American history.

Hooper (1742-1790) was born in Boston, Massachusetts. After attending Harvard University, he moved to Wilmington and became successful in law and politics. In 1776, as a member of the Continental Congress, Hooper corresponded with John Adams. He worked alongside Benjamin Franklin and Robert Livingston, two of the five members of Congress asked to write the Declaration of Independence. In 1781, after General Charles Cornwallis captured Wilmington, the British tried to capture Hooper. Unable to find him, they destroyed his plantation. Hooper and his family managed to make their way to Hillsborough, where he later died and was buried. In 1894, Hooper's remains were moved to a monument honoring the declaration signers at the Guilford Courthouse National Military Park near Greensboro. 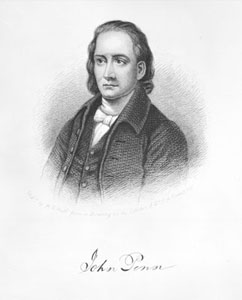 Penn (1741-1788) was born in Virginia to a well-to-do family. Although he did not attend university, he trained as a lawyer. He moved to Granville County in 1774 and was elected to the Provincial Congress in 1775 before the Continental Congress. A tireless worker, Penn remained in the Continental Congress until 1780. He served on fourteen committees and eight standing boards. One story has it that Penn was challenged to a duel, but while assisting his much older challenger across a street to the dueling site, convinced him that they should settle their differences. The duel never happened. After his political career, Penn practiced law. His remains also were later moved and reburied at the declaration signers' monument. 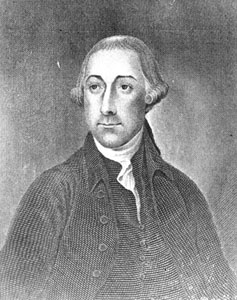 Hewes (1730-1779) is known as one of the founders of the Continental Navy, along with his colleague Adams. Born in Princeton, New Jersey, Hewes attended Princeton College and established a successful shipping business in Wilmington, North Carolina, before being elected to the Continental Congress. While in Congress, Hewes supported a ban on importing British goods, even though he knew his business would suffer. One of his most important actions was supporting a little-known sailor named John Paul Jones to become a naval officer. Jones became one of America's most famous naval heroes during the Revolutionary War. Hewes served as secretary of the Naval Affairs Committee until his death. He was buried in a church cemetery in Philadelphia, although the exact site has been lost to history.

Resources from the Library of Congress on the US Continental Congress may be found online at http://www.loc.gov/rr/program/bib/ourdocs/Constitution.html