"One Kicker of a Contraption" 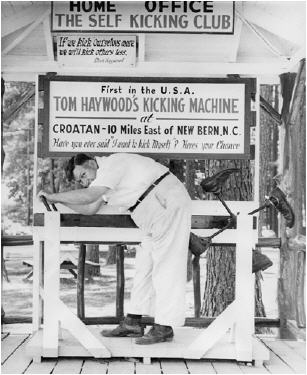 Ever do something so dumb that you just wanted to kick yourself?

Tom Haywood, of Croatan, knew that feeling and figured other folks might sometimes feel that way, too. So during the summer of 1937, he and local handyman Wilber Herring built a contraption that would deliver a good, swift kick to the seat of the pants of any willing recipient.

The simple machine consisted of a hand-operated crank connected by a belt and pulleys to a wheel. Four spokes, each with an old shoe attached, jutted out from the wheel. To get the boot, the operator just bent over and turned the crank.

A Craven County commissioner, Haywood said he intended the kicking machine for his personal use, “to perform the needed rebuke to my conscience.” He kept it behind his house. But so many folks heard about the machine and wanted to use it that Haywood finally moved it to a shelter in front of his general store. The shelter stood at the roadside on U.S. 70, about ten miles east of New Bern.

According to old newspaper accounts, the kicking machine got a good workout on Sunday afternoons from motorists going home from the beach. But at nighttime, the machine really got cranking. “A lot of folks don’t want people to know they need a kick, so they wait until I close up at night and then come around,” Haywood said. “Late at night I can hear the machine just a squeaking outside.”

Haywood’s kicking machine soon became a local tourist attraction and, eventually, a national curiosity. It booted behinds free of charge for decades. Several North Carolina governors are said to have used the machine, along with the baron and baroness of Bern, Switzerland. Local people say that popular television comedian Lucille Ball once got a kick out of the machine. And in 1941 President Harry S. Truman inspected it while visiting the nearby Marine Corps Air Station at Cherry Point. Pictures of the kicking machine appeared in newspapers and magazines across the United States and in other countries. In October 1937 Haywood demonstrated its proper use in a Universal newsreel (a short news film shown in theaters before the main movie, in the years before television). That same year, just for fun, he formed the Self-Kicking Club of America “to preserve our sense of humor” and “to remind us that, ‘If we kick ourselves more, we will kick others less.’”

These days a replica of the original kicking machine stands in front of Haywood’s old store, now an antiques shop. Heading east toward the coast, it’s on the right side of U.S. 70 just before its intersection with Catfish Lake Road in Croatan. So if you ever feel like you need a kick, go give it a try.

RoAnn Bishop is the curator of agriculture, industry, and economic life at the North Carolina Museum of History.