Latinos, also referred to as Hispanics, lived in North Carolina in relatively small numbers until the 1980s, when many people of Mexican and Central American descent began coming to the state in search of seasonal farm work. By the end of the twentieth century, Latinos had become the fastestgrowing minority group in the state, their numbers increasing by 35 percent annually. Overall, the number of North Carolina Latinos rose from 76,726 in 1990 to an estimated 600,000 by the early 2000s, with ever-increasing political, cultural, and economic influence attending that growth. 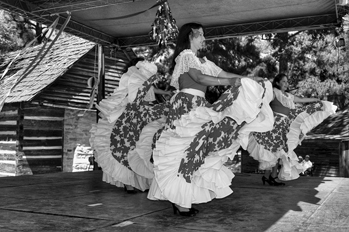 During this surge of immigration, some Latinos came to North Carolina directly from Mexico and Central American countries, but most arrived from California, Texas, Florida, or New York. In 1990, 69 percent of the state's Latinos were born in the United States, Puerto Rico, or other U.S. territories. Latino immigrants tend to be younger than the rest of the population, with 37 percent under the age of 18, compared with 25 percent for other North Carolinians. Forty percent of Latinos in the state are between the ages of 18 and 35, as compared with 27 percent of the rest of the population. A younger population usually means more children, which held true for the state's Latinos: in 1997, for example, when Latinos accounted for 2 percent of North Carolina's population, they produced 5.7 percent of all births in the state. In 1990, 43 percent of the state's Latinos had less than a high school education, but that trend was changing by the end of the decade. By the 1997-98 school year, for example, the North Carolina Department of Public Instruction reported that 33,000 Hispanic children were enrolled, a 250 percent increase from the previous year.

In the 1990s, North Carolina Latinos began to branch out into fields of work other than farming. Many found jobs and settled along the state's urbanized I-85 corridor, placing Wake, Mecklenburg, Forsyth, Guilford, and Durham Counties among the 30 U.S. counties with the highest rates of Latino population growth. Other Latinos settled in and around military bases such as Fort Bragg and Camp Lejeune or in smaller farming communities in the eastern part of the state. Latino workers were concentrated in agricultural, military, and service industries, including food and hotel service, construction, landscaping, and livestock slaughterhouses during the 1990s. By the early 2000s, a growing Latino middle class developed, with a more widely diversified place in the state's workforce and economy.

Groups such as Student Action with Farmworkers, based in Durham, have been important allies for Latinos as they grapple with problems of health and safety, educational barriers, immigration policies, and discrimination in the workplace. Some employers are trying to meet the needs of their Latino workers, such as Carolina Turkeys of Mount Olive (now named Butterball), which has created affordable housing for its workers near the plant. But Latino workers have also found themselves at the center of labor struggles, most notably perhaps a group of Guatemalan poultry workers at Morganton's Case Farms, who went on strike in 1995, seeking improved work conditions.

As the number of Latinos in North Carolina rose, their political impact grew as well. In the year 2000, there were 52,300 North Carolina Latinos who were U.S. citizens of voting age. The state's political parties have become more interested in Latinos, as evidenced by the formation of groups such as Hispanic Democrats of North Carolina. Congressman Bob Etheridge was among the first elected representatives to create a Latino advisory committee to learn more about the needs of his Latino constituents. In May 2002 the state Board of Elections approved permitting counties to print voter registration forms in Spanish.

Several Spanish-language radio stations began operations in North Carolina in the 1990s, and by the early 2000s nine Hispanic newspapers and magazines were being published in the state. In addition, Latino-run grocery stores, video stores, nightclubs, and other businesses continue to multiply. Regional Mexican and Central American restaurants and foodways are also increasingly evident in the state, as they are elsewhere in the Southeast and the nation. Government and nonprofit organizations are increasingly producing bilingual materials to serve the state's Spanish-speaking population. And numerous Latino associations and provider groups have emerged across the state. El Pueblo, Inc., a Raleigh-based nonprofit, has been an early leader in this area, offering statewide advocacy and promoting Latino cultural traditions through such events as La Fiesta del Pueblo, an annual festival held at the North Carolina State Fairgrounds and boasting some 60,000 attendees each year. Other service groups include the Hispanic/Latino Resource Center in Durham, the Latin American Association of North Carolina in Raleigh, and the Latin American Coalition in Charlotte.

Churches have also sought to reach out to the growing Hispanic community. Because a significant number of Latinos have come to North Carolina as active participants in the Roman Catholic Church, Catholic charities and other organizations have been particularly prominent in these outreach efforts. Many Protestant denominations also sponsor aid organizations for Latinos, however, and offer Spanish-language worship services.

In an effort to improve service to the state's Latino population, in September 1998 Governor James B. Hunt Jr. appointed H. Nolo Martinez as North Carolina's first director of Hispanic/Latino affairs. The director's job is to assist and coordinate various state programs intended to meet the needs of the Latino community. Some of these state efforts include Migrant Health Programs, Interpreter Training, Cultural Diversity Training, Bilingual Materials, Project Esperanza (which works with battered Latina women), Immigrants Legal Assistance Project, Legal Services of North Carolina, and Migrant Unit. Hunt also appointed a Hispanic/Latino Advisory Council made up of 25 members, with 15 voting members and 10 ex-officio members, most of whom are representatives of various state departments. The council's mission is to advise the governor on issues affecting the Latino community in the state, provide a forum for discussion, and promote state efforts to improve relations between Latinos and other North Carolinians. The council is divided into seven working committees that focus on issues in the areas of education, health and human resources, workers' rights, immigration, documentation and licensing, political involvement, and crime control and public safety.

this is awesome info sucks!!!

this is good info

this is good info