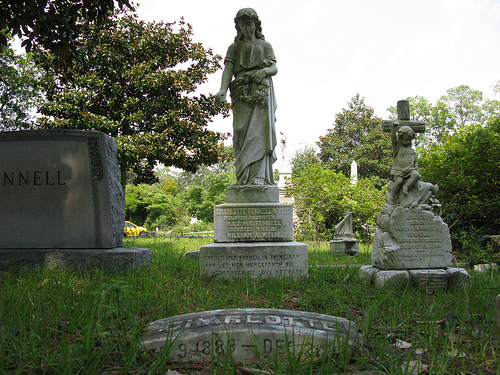 Young Nance Martin died May 25, 1857, on an ocean voyage with her father, and he did not want to bury her at sea. So the man sat his daughter’s body on a chair and placed it in a cask of rum to preserve it until the ship returned home. Six months later, Nance was buried—cask, chair, and all. Her grave is just one of many unusual ones at Wilmington’s Oakdale Cemetery, established in the 1850s. Others include the graves of Captain William Ellerbrock and the Reverend Robert Moran. Ellerbrock is buried with his dog, Boss. They both died in 1880, when Ellerbrock was fighting a fire. Boss rushed into the burning building and tried to drag out his master. The dog died with a scrap of Ellerbrock’s clothing in his mouth. The body of Moran, a Methodist minister, was placed in the first mausoleum (a stone building with aboveground tombs) built in Oakdale, in 1892. The sarcophagus (a stone coffin) was rigged with a sliding stone that mourners could roll back to see the body.

In cemeteries across North Carolina, we can find interesting stories about people, the places where they lived, and the times in which they died.

Oakdale was built during the rural cemetery movement that began in England and spread to the United States. Until about the 1840s most burial areas or graveyards were on the grounds of a church or a family’s plantation or farm. They followed an orderly and simple classical style, with graves lined up neatly and close together. But graveyards went “back to nature” and got a new name: cemetery, meaning sleeping chamber. These rural cemeteries usually were located on the outskirts of a town and designed like picturesque parks. They had winding roads, footpaths, hills, and streams. Some cemeteries looked like formal gardens, and they became popular places for outings. People would stroll, enjoy nature, and visit with friends. Such a custom goes back to ancient Egypt, where tombs became a place for families to gather, picnic, and socialize—keeping alive shared memories of friends and family members, in a way.

Wilmington was North Carolina’s most populous, sophisticated, and urban town in the mid-1800s, so naturally, it would open the state’s first rural cemetery. City graveyards had limited burial space, and concerns about community health also made people want to start rural cemeteries. In 1852 Wilmington leaders got a charter from the state and paid eleven hundred dollars for 65 acres of land northeast of the then town limits. The design included raised burial plots behind masonry walls. Other cemeteries in the area, including Pine Forest and Bellevue, largely were patterned after Oakdale, which over the years has grown to 128 acres. 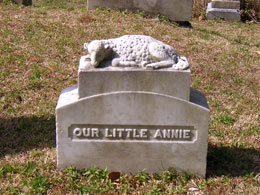 The first person buried in Oakdale, on February 5, 1855, was six-year-old Annie DeRosset. She was the daughter of Dr. Armand John DeRosset, first president of the cemetery corporation. The beauty and prestige of Oakdale led many people to move family members there from other grave sites. (This is why there are markers with earlier dates than 1855. The old gravestones came along with the bodies.)

Many famous people are buried in Oakdale: Governor Edward Bishop Dudley (1789–1855), the state’s first governor elected by the people rather than the General Assembly; Henry Bacon (1866–1924), architect of the Lincoln Memorial in Washington, D.C.; Major General W. H. C. Whiting (1824–1865), Civil War Confederate commander of the District of the Cape Fear, who early on planned and supervised the building of defenses, including Fort Fisher; Rose O’Neal Greenhow (1817–1864), Confederate spy who drowned while running the blockade at Fort Fisher in 1864; and David Brinkley (1920–2003), television journalist.

Cemeteries can reflect historic events. In 1862, for example, a horrible yellow fever epidemic spread through Wilmington. Approximately four hundred victims who died from the disease are buried in a special section of Oakdale. Few of those graves have monuments. Cemeteries also can include sections for families or members of groups. Oakdale has plots for members of fraternal groups like the Free Masons, the Odd Fellows, and the Improved Order of Redmen. It has a special section for the area’s Jewish population, Hebrew Cemetery, dedicated in 1855.

*Janet K. Seapker served for twenty-two years as director of what became the Cape Fear Museum. After thirty years, she retired from government service. At the time of this entry's publication, she operated Tours by Degrees group tour service and assisted her husband, Edward F. Turberg, in his architectural history practice.