The Golden Age of Sports

The 1920s has been called the Golden Age of American Sports. It also has been called the Age of the Spectator. The United States had a strong economy for most of that decade. Many workers had more leisure time. New and bigger stadiums and gymnasiums were built. The introduction of radio made it easier for fans to keep up with their favorite teams. Newspapers increased their coverage of sports.  Improvements in roads made it possible for fans to travel to athletic events in distant cities. For the first time, large numbers of Americans began to pay money to watch other people compete in athletic contests.

Baseball was the “national pastime” in the 1920s. More people went to baseball games, more people followed baseball, and more people played baseball for fun than any other sport. The most famous athlete in the United States in the 1920s was baseball star George Herman “Babe” Ruth, the right fielder for the New York Yankees. The colorful Ruth hit more home runs than any player had ever hit before. He excited fans with his outgoing personality. Ruth was the perfect hero for the Roaring Twenties.

Boxing was popular too. Heavyweight champion Jack Dempsey was almost as famous as Ruth. Horse racing, golf, and tennis all had their fans. College basketball was still a young sport. Professional football and basketball were minor sports.
North Carolina followed most of these trends, although professional boxing and horse racing events were not widely held in the state because of their association with gambling.

Baseball was very popular in North Carolina in the 1920s. Many communities had professional minor league teams. The Piedmont League had teams in such cities as Raleigh, Durham, Greensboro, High Point, and Winston. Charlotte had a team in the South Atlantic League. Many teams’ players came from the local communities. The best players could advance to the major leagues. Rivalries could be fierce. Games between nearby cities, like Raleigh and Durham, could attract large crowds on weekends or holidays such as the Fourth of July. Most colleges and high schools had teams. In fact, college baseball was more popular than college basketball during the 1920s.

Baseball wasn’t just a spectator sport. Many adults played baseball for community teams well into their thirties. Some businesses sponsored baseball teams. And there were some textile mill teams in state, though these were more prevalent in the 1930s. Young men would play games after working all day. Rick Ferrell would work on his family’s farm near Greensboro before playing on local baseball teams. Ferrell made it to the major leagues in 1929 and played so well that he was voted into the Baseball Hall of Fame. Children did not have formal baseball organizations such as Little League or Pony Baseball. Instead, they organized games on vacant lots. 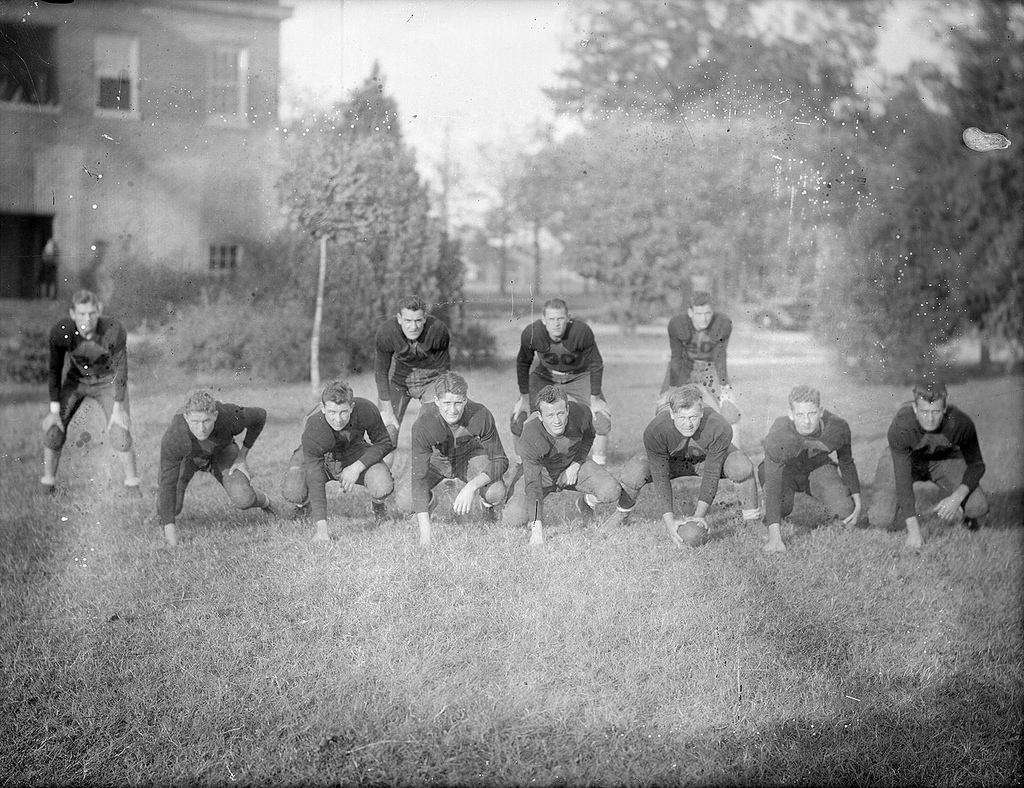 Many colleges had football teams in the 1920s. The University of North Carolina built Kenan Stadium in 1927. Duke University built its football stadium, which is now called Wallace Wade Stadium, in 1929. These schools still use these stadiums today. The best football teams in North Carolina weren’t as famous as teams in the North or Midwest, but local interest was high. Local teams sometimes would board trains and go north to play schools such as Yale or Michigan State. By the end of the decade, many games were broadcast on the radio.

Basketball was in its infancy in the 1920s. Even the biggest colleges played games in facilities not much bigger than today’s high school gymnasiums. North Carolina State College played its home games in Thompson Gymnasium, which held about two thousand people. Today’s North Carolina State University teams play in front of crowds ten times as large.

Still, there were some famous teams. The University of North Carolina went undefeated in 1924. Its star player, Durham’s Jack Cobb, was considered one of the best players in the country. In 1928 Eddie Cameron became basketball coach at Duke University. Duke’s famous Cameron Indoor Stadium, which opened in 1940, is named after him. These two schools first played basketball against each other in 1920. Many fans today think that these schools have the top rivalry in college basketball. UNC, Duke, North Carolina State, Wake Forest, and Davidson were members of the Southern Conference in the 1920s.

Sports were racially segregated in North Carolina in the 1920s, as was almost every aspect of life. Baseball was as popular with African Americans as it was with whites. Walter “Buck” Leonard grew up playing baseball in Rocky Mount. In the early 1920s, he would work eight hours at a railroad shop and then play baseball after work and on weekends. Leonard went on the join the Homestead Grays of the Negro National League. He is a member of the Baseball Hall of Fame. Historically black colleges such as North Carolina A&T had football, baseball, and basketball teams. Many African American colleges in the 1920s were members of the Central Intercollegiate Athletic Association (CIAA). This conference is still active. The CIAA has held its annual basketball tournament in Raleigh for the last few years.

Women and girls had limited opportunities for sports in the 1920s. Most schools had physical education classes for girls. Some educators thought that running, jumping, and sweating were not very ladylike. They opposed athletic competition for women. Women had to fight for the right to compete. Many, but not all, colleges and high schools had basketball teams for girls. Some girls competed in sports such as golf, tennis, or swimming.

The 1920s ended with the beginning of the Great Depression. By that time, spectator sports had become such a major part of American life that they were able to survive through the hard times of the 1930s.

Do you have any pages on just

Do you have any pages on just the baseball aspect of 1920s sports?
Btw this website is great and I learned a lot from it.

This is a amazing text

This is a amazing text

Thanks for visiting NCpedia. We appreciate your feedback. Have a woderful week.

Scooters are fire dawg idk what you mean