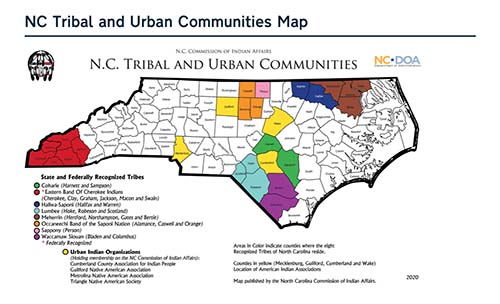 Originally published as "The State and Its Tribes"

The Eastern Band of Cherokee Indians is the only North Carolina tribe officially recognized by the federal government. The federal Lumbee Act of 1956 recognized that tribe in name only.

Some may think of treaties involving land as the only example of government relationships with Indians over the years. But the General Assembly’s creation of the N.C. Commission of Indian Affairs in 1971 offers strong evidence that the state has a positive relationship today with its American Indian citizens, tribes, and groups. The relationship between North Carolina and its tribes is well documented in statutes; in rules and regulations that govern state­funded programs; and in rules associated with historic Indian schools, court rulings, and faith organizations. The modern federal government has likewise recognized North Carolina’s rich American Indian heritage and history.

The benefits of state recognition range from being eligible for membership on the Commission of Indian Affairs and for program funding, to securing a rightful place in history. Since 1979 the commission has coordinated procedures for recognition. A committee of members from recognized tribes and groups reviews applications. Tribes and groups must meet certain organizational requirements. Criteria that then may be used to support an application for recognition include traditional North Carolina Indian names; kinship relationships with other recognized tribes; official records that recognize the people as Indian; anthropological or historical accounts tied to the group’s Indian ancestry; documented traditions, customs, legends, and so forth that signify the group’s Indian heritage; and others.

The creation of institutions such as Pembroke Normal School and East Carolina Indian School offers an example of the historic relationship that Indians have had with this state. The reservation lands currently held in trust for the Eastern Band of Cherokee Indians and the Historic Tuscarora Indian Reservation in Bertie County are examples of formal relationships between Indians and the federal government. Today, because 10,350 American Indian students attend public schools in the county, the Public Schools of Robeson County administers one of the largest Indian education programs in the nation, funded by the U.S. Department of Education. Statewide, 19,416 American Indian students attend public schools. The Haliwa-Saponi tribe has reestablished the old Haliwa Indian School in Warren County, which the author attended through the ninth grade. The new Haliwa-Saponi Tribal School is a charter school, attended by about 150 students. Such arrangements, or ongoing government-to-government relationships, offer examples of modern-day treaties with American Indians.

The situations of Indians differ from state to state. The United States has more than 550 federally recognized tribes and forty to fifty state-recognized ones. In North Carolina and nearby states, most Indians are members of state-recognized tribes and do not live on reservations. The latter is much the case nationwide, according to the 2000 U.S. Census, which found that more than 62 percent of Indians live off reservations. In Virginia there are three reservations, none of which is recognized by the Bureau of Indian Affairs (BIA); BIA does not provide the tribal members services or funding for such things as health care, schools, police, or fire protection. The tribes are not authorized to establish casinos or other gaming enterprises that federal recognition allows as an economic development tool. In North Carolina, only the Eastern Band of Cherokee tribe is eligible to receive BIA services and to operate a casino. In South Carolina, only the Catawba tribe has this status.

American Indians have long been studied and researched, especially by the academic community; however, for many years, little of that information found its way into history books. There are volumes of information on file about American Indians at North Carolina’s college campuses; only recently has much material begun to be included in textbooks used in public or private schools. Indians constantly question the common practice of focusing on Plains Indians in books and in popular media such as movies or television programs. The history and culture of Eastern Woodland Indians often get overlooked.

In North Carolina, before the Civil Rights era, Indians experienced discrimination and different forms of racism. At one time, some were discouraged to even admit that they were Indians. In several counties, separate schools were established for American Indians. These schools, built by volunteers and paid for by the Indian community, were small, mostly of one or two rooms. In some of these same counties, separate dining and other public facilities for the races were common before the 1960s; often, there were no “Indian” facilities—only “white” and “colored.” For a long time, limited employment opportunities existed for American Indians.

Today’s American Indians enjoy more opportunities. Their culture, heritage, and accomplishments are shared more often in and outside their communities. And the North Carolina government continues to increase its support of the many efforts of the state’s first inhabitants.

At the time of the publication of this article, Gregory A. Richardson was the executive director of the N.C. Commission of Indian Affairs. He is a member of the Haliwa-Saponi tribe. He served as one of the conceptual editors for the Fall 2005 issue of Tar Heel Junior Historian.

American Indian Timeline from the NC Museum of History.

What can you tell me about

What can you tell me about Arapahoe, NC. The Arapahoe have a reservation in Wyoming and into Shoshone ID. Is there any connection there?

the Catawba and the Carolina

the Catawba and the Carolina Siouan {many small tribes combined] the Cherokee Indians, the Creek, and the Cusabo my ancestors

I am the one of the original

I am the one of the original descendants of the original 15,000-25,000 Catawba Nation. of people. I am the surviving descendant of the two rounds of smallpox that decimated this Nation to 100 or less of a people in the 1800"s. I have done much research and lineage stops around 1873 Winnsboro, Fairfield.South Carolina, then my trail leads me to Charlotte, Mecklenburg , North Carolina, to Baltimore Maryland

Hello, I am trying to help my

Hello, I am trying to help my son who we adopted find his heritage. A copy of his biological Father's birth certificate says his father is Native American. I know the biological father was born in Cape Fear Valley Medical Center in North Carolina, Franklin County. Can you help us out? We have been at this task off and on for several years. It's so frustrating. Thank

Hope this helps, if you need additional help, please contact us at https://statelibrary.ncdcr.gov/contact-us/contact-us-form

How can I apply for an

How can I apply for an American Indian Tribe CDIB Card Number in North Carolina? Is a DNA test required?

You would need to have a

You would need to have a verified blood relationship to a tribal member and most NC tribes do not use CDIB cards for tribal enrollment purposes. If you want to know if you are related to a tribal member, some people require a DNA test. A person who has been told that they are Native heritage--that's not enough to be enrolled.

Thank you for visiting NCpedia!

The Federal Bureau of Indian Affairs (BIA) issues CDIB through the BIA Agency that services the local tribe.

I suggest visiting the website of the Tribe that you are interested in enrolling in for more information about Tribal enrollment.

My Father was William "Billy"

My Father was William "Billy" Skipwith named after his father Wm Billy Skipwith. I am trying to find any information on my Native ancestry.

I have been finding

I have been finding arrowheads and other artifacts in Nash County, Wake County, Johnston county and Franklin County. I’ve been doing some research to try to find the names of the tribes from these counties if possible. I haven’t been able to find a whole lot about it