Thousands of miles from home 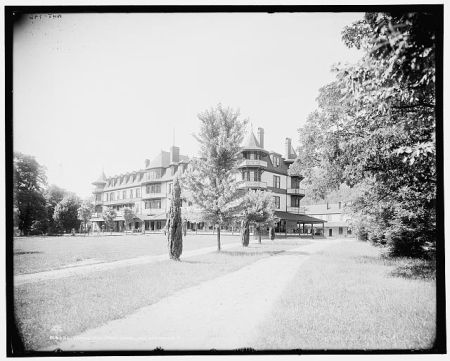 Let’s pretend. You are traveling in another country. That country's government declares war on your government, and you are held prisoner against your will until the war is over, thousands of miles from home. How would you feel? Lonely? Homesick? Scared?  Something like this happened to many German people on ships in American ports in 1917.

How did this happen? When war began in 1914, America remained neutral. Ninety-four German cargo and passenger ships stayed in United States ports for safety. Their captains were afraid that British warships would sink them, causing the loss of cargo, crew, and passengers. At first the stranded Germans moved freely around the country, but once America declared war against Germany in 1917, they became enemies of the United States.

The presence of these Germans and their ships was both a problem and a solution for the United States. Many Americans were afraid the ships’ officers and crews were spying for Germany, but the American government could not send them back on the ships—the British would sink them. Something had to be done with the German passengers and crew. Since they were not in the military, they could not be considered prisoners of war and had to be treated differently. They had to be treated as internees.

And something had to be done with the ships—what would happen to them? The American government decided that they could be used to help to solve another problem the government had. Soldiers and war supplies had to be carried overseas to the war in Europe, but there were not enough American merchant ships to get the job done. So, ships needed to be built, but there was not much time or money available. In the end, American leaders decided to use the German ships to carry American soldiers and supplies overseas. This saved months of time that would have been spent building new ships and saved millions of dollars in building costs.

President Wilson decided to look for an internment camp to hold the internees. The ideal site had to have a mild climate, had to be isolated, and had to have buildings and sewer, water, and electrical services. The site also needed to be close to railroad lines for transportation but away from large cities and out of the public eye. Officials investigated sites in New England, New York, and North Carolina. They decided on the Mountain Park Hotel in Hot Springs, North Carolina.

Located in Madison County in the mountains north of Asheville, Hot Springs is beside the French Broad River. It was chosen for its lack of mosquitoes and its mild climate. The hotel had been built for 300 guests, but the American government planned to place about 700 German ships’ officers in it. Another thirty-six buildings had to be built, including barracks for the remaining 1,600 crewmen from the ships, a dining room and kitchen, a camp hospital, showers, lavatories, and guardhouses for civilian guards. Most of the structures were built by the Germans, but the YMCA built a recreation room and a school building.

The Germans spent their time swimming and playing golf, tennis, and croquet. Others tended flower and vegetable gardens. Some were paid by the government for labor in the camp. Many attended classes to learn English, math, and navigation, and some even built a small village with buildings that looked like those in Germany.

There were many different reactions to having the “enemy” so close to an American town. Some townspeople were jealous that the Germans were being paid for labor inside the camp. Others felt that the Germans received too much to eat, especially since Americans were having meatless days to conserve food. On the other hand, some local residents welcomed the Germans because they brought new jobs to the area. Most guards were citizens of Hot Springs and the surrounding county. Families of the officers and crews came and lived in town to be near their men, and they brought money to the town’s economy. Local businesses benefited from the orders for lumber and plumbing supplies needed to build the camp.

After only fourteen months, the American government decided to close the camp and to make the Mountain Park Hotel a hospital for wounded American soldiers. Some of the detainees were placed in jobs outside the camp. On August 30, 1918, the remainder were sent to Fort Oglethorpe, Georgia, where new barracks were being built. They all were eventually sent home in September 1919.

I have hundreds of letters

I have hundreds of letters from my grandfathers youngest brother who was station at Chattanooga 1917 to 1918,your dates don't add up. In the winter of 1917 they had about 20 thousand troops living there.was a cables car strike and a bad winter ,they where living in tents. They started to build 500 Barack, s for them to move in, to spring of 1918, at Oglethorpe . By then they had 150,00 troops ,and had 480 German prisoner's. I.n May they went Douglass Arizona, the to New jersey,Jersey, new york to France. Be was killed in June. So they had the barracks, and prisioners before May . So how could he write about it before the we got into the wa r After May 10,1918

My great-grandfather disappeared when my grandfather was a child. I'm trying to locate him. We have been unable to find a death certificate. Since his disappearance after the 1910 Census and before the 1920 Census, I was thinking that maybe he may have been transported to one of these camps since he was a german american. Is there a list of names of people that were placed/died in these camps that I can check?