December 6, 1941, was a clear, sunny Saturday in early December. John Sawyer* -who had turned ten in July- and his father, Bill, stood in a crowd before a large ship on the Wilmington waterfront. Bill Sawyer worked as a welder at the North Carolina Shipbuilding Company there. Jobs had been scarce in the area following the Great Depression, and Bill had only recently started work at the shipyard.

The family had a home provided by the government to war workers, and with the growth in Wilmington, a new job as a police dispatcher had opened for John’s mother, Martha. John and his fourteen-year-old sister, Nancy, went to a good school with other children whose parents worked during the day. The federal government, through a special program for war workers, provided a place for the children to play safely after school. With the family’s added income, John and Nancy had things that their cousins who lived on a farm did not. In Wilmington they had a library and clean water that came from a big tank John could see soaring up into the sky. His cousins in the country had to pull up water from a well, because they did not yet have electricity.

Bill Sawyer’s job at the North Carolina Shipbuilding Company was to weld together large sections of steel plate about the size of a trash Dumpster into the major parts of a ship. On this beautiful day, as John stood on one side of his father to watch the launch of the first ship built at the shipyard, the SS Zebulon Baird Vance, he was proud of his father’s role.

A long line of cars approached the crowd, led by Wilmington police on motorcycles and state highway patrol cruisers with sirens blaring. The line stopped in front of the ship, and Governor J. Melville Broughton and several officers of the shipbuilding company exited the lead limousine. Other limousines had brought naval officers and other government officials to the launching ceremonies. The Vance—as a working vessel in maritime service, designated with “SS” for “Steam Ship” before its name—was built under a contract with the U.S. Maritime Commission. Other vessels built at the yard and sold to the U.S. Navy would be designated “USS,” or “United States Ship,” to indicate that they were vessels in the armed forces of the United States.

John’s father had told him that only ten months ago, the large industrial plant where the shipyard stood had been a rolling sandy pine forest next to the shores of the Cape Fear River. A Wilmington company, Orrell and Underwood, along with a Charlotte company, V.P. Loftis, had started construction February 3, 1941, on what would become North Carolina’s major industrial effort during World War II. President Franklin Roosevelt had asked Congress for the money to build ships like the Vance, called Liberty ships, to carry ammunition, trains, tanks, guns, and other supplies to the Allies in Europe, including Great Britain. These Allies were fighting against another group of countries—including Germany and Japan—called the "Axis" nations. The United States was not yet at war on December 6, but this would change quickly after the Japanese navy suddenly attacked the American naval base at Pearl Harbor, Hawaii, the next day.

By May of 1941 the keel had been laid for the Vance, and Bill Sawyer had gotten a job. In the summer, welding was hot, hard work—all day, and some nights and weekends. The shipyard ran three shifts, twenty-four hours a day, seven days a week, every week of the year. (That fall, when Bill Sawyer’s brother needed help bringing in the crops on the family farm, the North Carolina Shipbuilding Company did let Bill have time off to take in the tobacco and soybeans.) At the shipyard’s peak in 1943, over 20,000 people worked there. Around 1,600 of these workers were women. Thirty percent of the workers were persons of color. Some 56 percent of the workers lived in the city of Wilmington, with hundreds of people commuting more than twenty-five miles to the yard from across southeastern North Carolina. Some workers walked from nearby houses, while most drove or rode buses.

Seven months after work began on the Vance, the ship was ready to be launched into the Cape Fear River. The platform party walked up several flights of stairs to a small deck in front of the ship. There were speeches by Governor Broughton; Homer Ferguson, the president of the Newport News Shipbuilding and Dry Dock Company; Wilmington native Roger Williams, the president of the North Carolina Shipbuilding Company; and Emery Scott Land, the chairman of the U.S. Maritime Commission. The group then approached the ship, and the governor’s wife, Alice, broke a large bottle of champagne against its bow. At the same time, shipyard workers under the Vance knocked out large blocks of wood called keel blocks, and the vessel began to slide into the river. Tugboats standing by let loose with shrieking steam whistles. Car horns honked, and excited spectators yelled as the Vance moved into the middle of the channel. The tugs towed the ship to a special pier called an “outfitting pier,” where work would be finished up. After a trial run past Bald Head Island and out to sea, the ship would be released to the Maritime Commission. 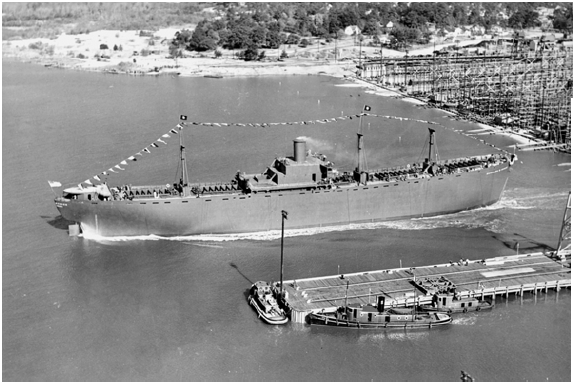 After the Vance was secured to the outfitting pier, the platform party and all the other guests attended a large outdoor reception with lots of food and drink. It was the biggest party John had ever been to, and it was still going on when his mother got off work and took John and his sister home at eight o’clock that evening (several hours before the party ended). The next morning, the Sawyers went to church and came home to eat with their cousins, who had come into Wilmington to see the new ship. That afternoon, people began to run around shouting that the Japanese had attacked Pearl Harbor. Quickly, shipyard police escorted civilians out of the yard and set up a security perimeter at the main gate. Soon, America was at war.

During World War II, the North Carolina Shipbuilding Company built 243 ships for the Maritime Commission and U.S. Navy. Some 126 vessels were initially built in what was called the standard Liberty class. American shipyards constructed about 2,700 Liberty class vessels in seventeen facilities along the East, West, and Gulf coasts. Most of the vessels served during the war in convoy duty to Europe and the Soviet Union.

Starting in 1943, the North Carolina Shipbuilding Company built 117 better, faster vessels in what was called the Victory class. These were high-pressure turbine ships designed to carry American supplies across the vast expanses of the Pacific Ocean for the projected invasion of Japan in the fall of 1945. Some 543 Victory ships were built during the war, with about 32 percent of the total being constructed in North Carolina. The North Carolina Shipbuilding Company was the largest wartime industrial effort in the state. While other ship and war plants operated in the city and across the state, no other facility had as great an impact.

In January of 1945, Bill Sawyer received a notice from the local draft board that he was needed for service in the army. For a time, it looked like he would be sailing to Japan on one of the vessels he had helped build. After entering the army and going through basic training, he was transported to Hawaii in July on a passenger liner, escorted in a convoy by heavily armed navy ships. But Sawyer got news in August that the Japanese had surrendered to the Allies at a ceremony in Tokyo Bay on the deck of the battleship Missouri.

He soon came home from the army. By that time, the shipyard had closed and become part of the North Carolina State Port at Wilmington. Having learned how to operate and repair radios in the army, Sawyer got a job with the local radio station—which was investigating a new system called television, an outgrowth of radar systems he had worked on.

The Sawyers were proud of the work that the North Carolina Shipbuilding Company had done during the war. Many of the ships came home after World War II and were anchored in the Cape Fear River and other rivers well into the 1990s. The military called some back into service during the Korean, Vietnam, and first Gulf wars. In more recent years, airplanes carry most military supplies, and there is less need for steel ships.

*Note: John Sawyer and his family are fictional characters. But their story is typical of that of many North Carolinians who worked at the North Carolina Shipbuilding Company during World War II. And the other elements of this article are completely based on historical fact.

At the time of the publication of this article, Ralph Scott was the curator of printed books in Special Collections at Joyner Library, East Carolina University. He wrote the book The Wilmington Shipyard: Welding a Fleet for Victory in World War II.

"A caravan of fifty trailers— on its way to provide temporary housing in Wilmington—stops for the night outside Washington, D.C. Work in building ships and in other wartime industries brought lots of people from surrounding areas into North Carolina towns." Image from the Library of Congress, Prints and Photography Division, U.S. Farm Security Administration/Office of War Information Collections.

"The SS Zebulon Baird Vance, a Liberty ship, heads out into the Cape Fear River after its launching in Wilmington, N.C., on December 6, 1941. The North Carolina Shipbuilding Company built many vessels like this one during World War II." Image courtesy of the State Archives, North Carolina Office of Archives and History.