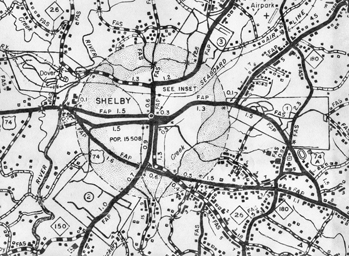 Round towns are incorporated towns in which the boundaries are fixed at a certain distance from a central landmark, forming a circle. In North Carolina round towns first arose in the early nineteenth century, when many new towns were incorporated. The state had 34 "true" round towns in 1968, along with several other former round towns that had altered their circular shapes by annexation; the number in 1990 had fallen to 27. In 1990 Cleveland County was home to the largest number of round towns in one county, with seven: Waco, Lattimore, Earl, Mooresboro, Polkville, Casar, and Belwood, the last of which is shared with Lincoln County.

Other landmarks used by round towns to set boundaries include a railroad bridge (Waco, incorporated in 1907) and the center of the local high school building (Boiling Springs, in Cleveland County, incorporated in 1911 but no longer a round town). The town limits of Bear Grass, incorporated in Martin County in 1909, were "all that territory within a radius of five hundred yards from a certain white oak on the east side of the public road, near a well at the stores of Rogers Brothers and Cowing Brothers."

One of North Carolina's early round towns was the Cleveland County seat of Shelby, incorporated by an act of the General Assembly in 1843. The original town boundary formed a circle with a quarter-mile radius, beginning at the courthouse. In 1901 the town limits were increased to a radius of three-quarters of a mile from the courthouse and in 1928 increased again to a radius of a mile and a half. Shelby remained a round town until the annexation of a development in 1957, which altered its circular shape. Several later annexations added more "bumps" to the town limits. By 1976 the city council had begun changing the town limits to conform with property lines, but Shelby's boundaries still contained traces of its days as a round town.

Round towns are also found in Indiana, Georgia, and Mississippi, states to which many North Carolinians emigrated in antebellum times.