"Help from the Home Front: Women’s Clubs Contribute to the Cause" 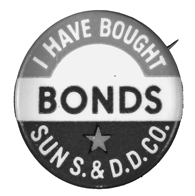 During the war years, women contributed to morale and to the Allied cause in a number of ways. Many served in the military’s auxiliary units for women, such as the Navy WAVES (Women Accepted for Volunteer Emergency Service). Actresses in Hollywood and female musicians volunteered and took their shows on the road, entertaining troops. When the draft hit professional baseball by taking the most talented athletes into military service, women began to play softball professionally. Across the country, women traded their skirts and purses for trousers and tool aprons. They swapped their rural homes for city dwellings, going to work in factories and assembling things like ships and planes. Such women got the nickname of Rosie the Riveter.

Members of the General Federation of Women’s Clubs of North Carolina (GFWC-NC) were another group working for the war. Clubs across the state—such as the North Carolina Sorosis in Wilmington, the Raleigh Woman’s Club, and the Whiteville Junior Woman’s Club—participated in a range of programs contributing to national defense. Their most common projects included sponsoring activities to boost soldier morale, such as hosting dinners and dances; volunteering in Red Cross sewing rooms, knitting sweaters and making bandages; and selling war bonds to finance the fight. 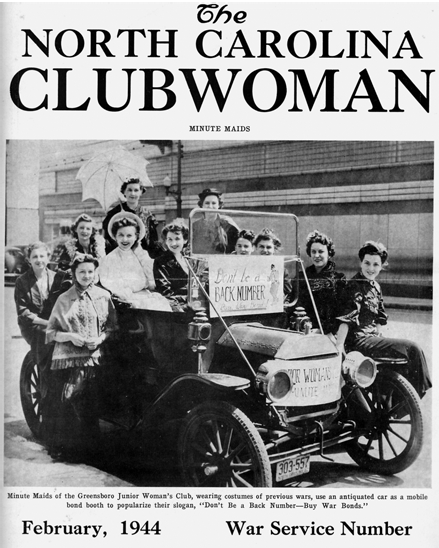 Efforts to sell U.S. war bonds and stamps were by far the most extensive and significant work of the GFWC-NC clubs. The costs associated with World War II were so high that the federal government had to borrow money from the public. The U.S. Treasury did this by selling war bonds and stamps. A person could buy the most popular Series E bond for $18.75. Ten years later, the Treasury paid the investor $25 when the bond matured. Stamps could be purchased for a lower price and placed in a booklet, until the amount of stamps equaled the cost of one bond. Most bonds were sold during seven nationwide war loan drives. North Carolina clubs saw these nationwide drives as a perfect chance to mobilize their members.

During the Third War Loan Drive, the North Carolina federation aimed to raise $360,000. This amount would equip an entire regiment, or approximately 3,000 soldiers. Clubs across the state not only met that mark, they doubled it, selling enough bonds to equip two regiments. The Fourth War Loan Drive became known as the “Buy a Bomber” campaign. North Carolina club women raised money for twenty-four bombers during this drive. A few months later, during the Fifth War Loan Drive, the GFWC-NC partnered with two sister organizations, the North Carolina Federation of Home Demonstration Clubs and the North Carolina Nurses Association, to raise $4,040,000 to fund and equip a hospital ship. After exceeding the goal for the drive by over $1 million, the federation “bought and supplied” the ship Larkspur, one of eighteen ships in the U.S. Army’s hospital fleet.

Even after this tremendous gift, club members continued to finance the fighting. During the Sixth War Loan Drive, the Whiteville group purchased the Hellcat Fighter as part of a larger campaign: “Air Armada for Our Navy.” By the end of the war, the North Carolina federation ranked fourth out of the forty-eight state organizations in bond sales. In all, the group’s members contributed $12,179,245 to the war in this way.

Innovation and determination enabled the women to sell such an impressive amount of bonds. For instance, the Junior Woman’s Club made Whiteville the first tobacco market town in North Carolina to launch the tobacco bond program. The club set up booths to sell bonds in six tobacco warehouses in Whiteville. Women encouraged tobacco growers to buy bonds with five cents from every pound of tobacco sold. The campaign eventually extended to every North Carolina tobacco market town.

Another common and trendy way to sell defense stamps was to make and sell corsages made of war stamps: “warsages,” to be worn in place of floral corsages. Club members assembled warsages and sold them in war bond booths, stores, restaurants, hotels, bus stations, and even on the street. Women who typically wore floral corsages on Easter or other holidays and on formal occasions put on these arrangements. Men even exchanged their boutonnieres for a more patriotic pin. Wearing stamps, not flowers, became the fashionable trend. This type of creativity, coupled with patriotism and determination, enabled North Carolina club women to achieve what they did for the protection of democracy.

In the midst of the war, R. L. McMillian, the director of Civilian Defense for North Carolina, commended North Carolina club women, saying, “The work you do helps to shorten the war, and every day saves untold lives.” Men who supported women's war efforts and women who became Rosie the Riveters may be the best-known heroes of World War II. But members of North Carolina women’s clubs became civic soldiers and worked determinedly for the war effort as well. Such women were, in their own way, home front heroes.

*At the time of the publication of this article, Jennifer Biser was a volunteer with the Christian Appalachian Project in eastern Kentucky, planning to pursue a master of arts in teaching and a career teaching high school social studies. Biser graduated in 2007 from the University of North Carolina at Chapel Hill with a B.A. in history. She won the 2006 North Carolina Museum of History student essay contest for her honors thesis on the GFWC-NC during World War II.

Partners in Winning the War: American Women in WWII: https://www.womenshistory.org/resources/general/womens-roles-during-world-war-ii

Individuals often wore buttons declaring that they had bought war bonds. Image courtesy of the North Carolina Museum of History.

where this middle schooler volunteered. Some schools, like Burton Elementary in Durham (left), held a monthly drive where students