“War Woman” of the Cherokee 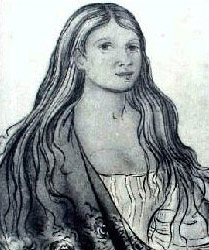 Children born to Cherokee parents in what is now North Carolina before the Cherokee had any contact with European settlers would have been a members of their mother’s clan. Property belonged to the women. They had a great deal of freedom in choosing their partners and in managing their families. Some women even spoke in meetings and helped decide tribal matters, including whether to go to war.

The Cherokee had a matrilineal society, which means that everyone traced kinship through the mother’s side of the family. Indian life was also matrilocal, which means that families lived in the woman’s house. After marriage, a husband moved in with his new wife.

When British explorers began to settle in the New World, they introduced a different model for society—one that was patriarchal, or dominated by men. By the beginning of the 1700s, Indian life had been so dramatically altered by white control that the role of Indian men and women within their own villages was changed forever.

Nanye'hi upheld her native culture in some ways and in other ways, adapted to the new. Nanye’hi's own people called her War Woman and, later, Beloved Woman because of her leadership within the Cherokee Nation. She was also highly regarded by white scouts, hunters, and government agents, who valued her friendship and advice. They called her "the famous Indian woman Nancy Ward."

Nanye’hi was born around 1738 in the Cherokee town of Chota on the Little Tennessee River. Her mother’s brother was the famous Attakullakulla. He was called the Little Carpenter because he was good at putting together treaties. Before Nanye’hi was born, Attakullakulla had gone with several Cherokee chiefs to England, where they had met the king. When Nanye’hi was a little girl, she likely heard stories about her uncle. Perhaps she was influenced in this way to become a friend of the new settlers.

Nanye’hi’s childhood was spent in a very confusing time. There were many different kinds of conflicts going on. Indian tribes often went to war against each other, as they had throughout their history. Also, France and England fought each other for control of North America in the French and Indian War (1754–1763). Later, the American colonies fought the English in the American Revolution (1775–1783). Many Cherokee favored the British, but Nanye’hi took the side of the colonists.

When Nanye’hi was in her teens, she married Kingfisher, and they had two children— Fivekiller and Catherine. Kingfisher was a member of the Deer clan, but the children became members of their mother’s Wolf clan. When the children were small, Nanye’hi must have lived like many other Cherokee women—tending her own small garden, working in the community fields, preparing food for her family, and participating in village life. Nanye’hi’s life changed dramatically when she joined Kingfisher in a war party to fight the Creek Indians in Georgia. She was probably along to help prepare food for the warriors, but when the battle began, Kingfisher was killed. Nanye’hi seized his gun and helped defeat the Creek Indians. The Cherokee recognized Nanye’hi for her bravery in battle and called her War Woman. This title meant that she could speak in council meetings and had the power to decide the fate of prisoners.

When Nanye’hi later married a white trader named Bryant Ward, she became known as Nancy Ward. They had a daughter, Elizabeth. Their marriage lasted only a few years because he joined his family again. But Nanye’hi was later an honored visitor in his home.

Learning so much about the European settlers must have helped her to understand and accept them. On several occasions she warned settlements about Indian attacks. She once saved a white woman from being burned alive by Indian warriors who were angry that European settlers had broken treaties and taken Indian land. In return for Nanye’hi’s help, the settlers treated her as their special friend.

Because of the settlers’ success in claiming land as their own and because of the weapons they had available to defend it, Nanye’hi must have decided that the only way to preserve any of the Indians’ way of life was to make peace with the settlers. At the same time, she did not want the Cherokee to give up any more of their land. She asked that the Cherokee and the settlers establish "a chain of friendship."

Nanye’hi, called Beloved Woman by the Cherokee in her later years, died in 1822. In the next decade, most of the Cherokee were forced to leave North Carolina on the Trail of Tears to move to government lands in the West. Some were allowed to remain in the western mountains of North Carolina, where their descendants live today as members of the Eastern Band of Cherokee Indians.