In February 1904 nine men sat down in the grand chamber of the Supreme Court of the United States. Facing them were lawyers from the states of North Carolina and South Dakota. The lawyers waited anxiously for the verdict of a most unusual (and politically charged) case first argued before the court several months before. The case had been brought about by greed and by the double dealings of politicians angry at the Democratic Party in power in both states. In the balance: a verdict that could bankrupt and cripple North Carolina for generations to come.

This unique Supreme Court case began in the 1860s in the aftermath of the Civil War. During the Reconstruction era, North Carolina’s government sold large numbers of bonds (basically IOUs) to pay for building the Western Carolina Railroad. This railroad would connect the Mountains to the rest of the state. Crooked lawmakers took the money, and the railroad was not finished at that time. The bonds became worthless.

In 1879 North Carolina offered to buy back the bonds for one-fourth of what investors had paid. But a New York company, Schaffer and Brot 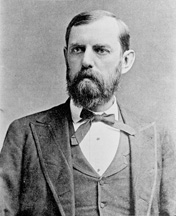 hers, still had over two hundred bonds in 1901 and wanted to get back their full worth. Company officials asked U.S. Senator Marion Butler, of North Carolina, and Daniel Russell, a former North Carolina governor, for help.

Since he was a Republican angry that the Democrats had recently destroyed his party in North Carolina—and he wanted to make some money for himself—Russell agreed to provide legal help. In exchange, he would get a third of any money collected above what North Carolina had been willing to pay. Butler also contacted his fellow Republican senator from South Dakota, Richard Pettigrew. Neither had much to lose, because their time in Congress was almost over; the Democratic-controlled state legislatures of North Carolina or South Dakota were not going to reelect them.

Russell, Butler, and Pettigrew came up with a complicated scheme in which Schaffer and Brothers would donate ten bonds to South Dakota. According to the U.S. Constitution, the New York–based company could not sue North Carolina in federal court without North Carolina’s permission. But another state could sue North Carolina in the U.S. Supreme Court for full payment on the bonds. So the State of South Dakota and Schaffer and Brothers took on North Carolina together, hoping to force the state to pay the full amount on all the bonds plus interest. This was the first time that a state had sued another state in the Supreme Court for payment of a debt.

If it lost the case, North Carolina would owe a total of about $2 billion (in 2008 dollars) to those who still had bonds. This was almost equal to the value of all personal property (everything except for land and buildings) in the state.

The Supreme Court ruled, in a 5–4 decision, that South Dakota would get $664,000 (in 2008 dollars). However, the court said that Schaffer and Brothers could not be part of the case because it was trying to use a loophole in the law to get money.

Governor Charles B. Aycock was hit with this lawsuit just as he was entering office. He felt that South Dakota had gotten the bonds illegally, so he dragged his feet in paying the settlement. But in 1905, after Aycock left office, North Carolina did pay South Dakota. Schaffer and Brothers finally gave up and accepted the smaller payment that North Carolina had originally offered.