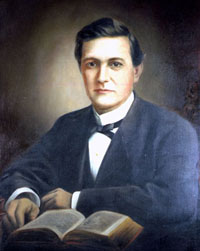 Member of a Halifax County family prominent in North Carolina politics for three generations, William Walton Kitchin (1866-1924) focused the state’s attention on economic reform just as his predecessor Charles B. Aycock had concentrated on educational improvements. Born on October 9, 1866, near Scotland Neck to William Hodge (“Buck”) Kitchin and his wife, the former Maria Arrington, “Little Buck” was educated in local schools, among them Vine Hill Academy. His father, an officer of the Twelfth North Carolina Regiment taken prisoner at Spotsylvania Courthouse in 1864, served a single term in the United States House in 1879-1881. His brother Claude served in the U.S. House from 1901 to 1923, and rose to majority leader. Young W. W. Kitchin, upon graduation from Wake Forest College in 1884, for one year edited the Democrat in Scotland Neck. He then studied law with his father and at the University of North Carolina. In 1888 he entered practice in Roxboro. In 1892 he married Musette Satterfield of Person County; they had five children.

W. W. Kitchin, a Democrat, entered politics at a point when his party’s fortunes were at a low ebb. He began his career in 1890 as party chairman in Person County. In 1892 he unsuccessfully ran for the state senate. In 1896 he competed for the U.S. House seat in the Fifth District against incumbent Republican Thomas Settle and the two engaged in a notable series of debates. Kitchin was the sole Democrat elected to either house of the Congress from North Carolina in the fall 1896 election. As a Congressman Kitchin served on the Committee on Naval Affairs and the Democratic Party’s Congressional Campaign Committee. He defended the white supremacy and suffrage amendments and took a progressive stance toward other issues, advocating direct election of senators, regulation of business, and an income tax. 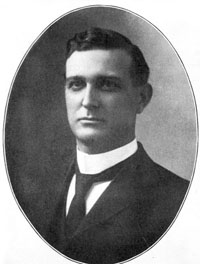 In the 1908 race for governor U.S. Senator Furnifold Simmons and ex-governor Aycock backed Locke Craig. In the party convention Kitchin, then in his twelfth year in Congress, was the candidate of those opposed to the “Simmons machine.” He triumphed on the sixty-first ballot over Craig and Ashley Horne, but only after an informal agreement was reached that Craig would be the nominee four years later. Campaigning largely on an antitrust platform and as the “people’s choice,” the liberal Kitchin soundly defeated Republican J. Elwood Cox. Voices were raised warning of the radical nature of Kitchin’s positions, some even indicating that his plans were socialist.

As governor Kitchin increased expenditures for education, public health, care for the mentally handicapped, and drainage of swamp lands. In line with the national efforts to break up trusts and regulate business, Kitchin backed legislation to strengthen antitrust laws, require better sanitation and set a ten-hour workday in factories, prohibit work by children under the age of thirteen, and license foreign corporations which did business in the state. During his term 1300 miles of roads were constructed; his administration favored study of road needs before setting a comprehensive construction policy.

In 1912 four influential Democrats competed for the nomination for the U.S. Senate. Incumbent Simmons, who controlled the conservative wing of the party, withstood challenges from Governor Kitchin, state Supreme Court Chief Justice Walter Clark, and ex-governor Aycock, who split the liberal vote (Aycock died during the campaign). Kitchin returned to the practice of law, setting up a partnership in Raleigh with James S. Manning. In 1919 a stroke forced him into retirement and he returned to Scotland Neck. A stroke also felled his brother Claude and the two spent much time together in their final years. William W. Kitchin died on November 9, 1924, and was buried in the Baptist Cemetery in Scotland Neck.

Hunter, Carey J. 1911. Governor Kitchin: the man and the principles that guide him. North Carolina?: s.n.