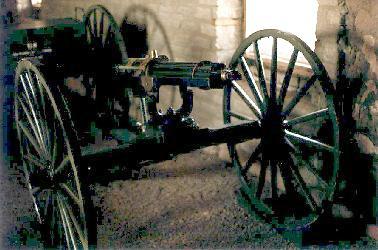 After the Civil War broke out in 1861, trains carrying hundreds of wounded Union soldiers began arriving in Indianapolis, Indiana. The horrors of the casualties of war so upset one man living there, Richard Jordan Gatling, that—he later wrote in a letter—he felt there must be a way to make war so inhuman (or savage), no one would let it happen again. This thinking led to the North Carolina native’s idea of building a weapon so destructive, it would prevent wars. From his agricultural background, Gatling applied the theory of putting bullets, like seeds, into a machine over and over, at regular times. He studied the principles of projectiles, or bullets, and came up with a plan for rear-loading gun barrels fed by a strip of cartridges and fired in rapid succession.

Thus the Gatling gun, the ultimate weapon of the 1800s, was patented on November 4, 1862. The power of this new gun was shocking and awesome. It could fire more than two hundred bullets per minute—a rate unheard of at that time.

Gatling was born September 12, 1818, in a log cabin on the Jordan and Mary Barnes Gatling plantation in Hertford County in northeastern North Carolina. His parents were very industrious. Their four sons—James Henry, Richard Jordan, Thomas Barnes, and William Jesse—were skilled craftsmen, who learned firsthand from their father the arts of woodworking and metalworking, as well as the value of working hard and saving money.

Richard Gatling was educated at Buckhorn Academy in nearby Buckhorn (now known as Como). In his early years, he worked on his father’s plantation and as a law clerk in Murfreesboro. He also taught for several years in a nearby field school. In 1844 he followed his dream to go West and seek his fortune, riding a horse to St. Louis, Missouri. For several years, Gatling lived in that city, where he made his first fortune from selling farm equipment—including a cotton thinner and a cottonseed planter that he and his father had developed and patented back home. While in St. Louis, Gatling converted the cottonseed planter into a wheat drill, which sold well. The main components, or parts, of the cotton thinner and seed planter later became key parts in the development of the world’s deadliest weapon of the time. It is not known exactly how many years Gatling lived in St. Louis, but on October 24, 1854, he married Jemima Taylor Sanders in Indianapolis, where he continued his work in developing and selling farm implements. Then he got the idea for his famous gun.

In the fall of 1862 Gatling placed an order for twenty Gatling guns with the company of Miles Greenwood in Cincinnati, Ohio. But about the time that the guns were completed, the factory burned. Some people thought that the fire was an act of sabotage by a person or group that did not want the guns to be made. The fire, and resulting financial loss, did not stop Gatling, who had twelve guns made at another firm in Cincinnati. General Benjamin Butler of the Union Army later used some of these guns around Petersburg, Virginia. The Gatling gun did not play a pivotal role in the Civil War, though, as some have said. It was used in some skirmishes but had no major impact. 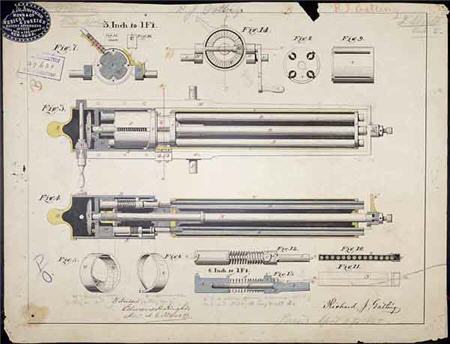 In 1865 Gatling made improvements to his gun, and the United States government held firing trials at the Washington (D.C.) Naval Yard. The next year, he had more guns made at the Coopers’ Firearms Manufacturing Company in Philadelphia, Pennsylvania. After more successful test trials in Washington, Philadelphia, and Fort Monroe, Virginia, the federal government adopted the gun for its armed forces. In August 1866 the U.S. War Department ordered a hundred Gatling guns, which were made at the Colt Firearms Company in Hartford, Connecticut, and delivered in 1867. Gatling began to receive more orders for his gun—some of them from England, France, Germany, Turkey, Italy, and Russia, after he made two trips to Europe to promote sales of the new rapid-fire weapon. In 1870 the Gatlings moved to Hartford to be near the Colt factory.

As orders for Gatling’s machine gun grew, he became richer and more widely known. In the 1870s and 1880s he was received in the highest courts of the world and was one of the most famous Americans. His gun brought him not only money but many awards and recognitions from world fairs and other events. But by the early 1890s, Gatling’s business greatly declined, mainly due to competition from more-powerful rapid-fire weapons inspired by his gun. Suffering from health and financial problems, Gatling and his wife moved in 1897 to New York City to live with their grown daughter, Ida Gatling Pentacost. Their sons, Richard Henry Gatling and Robert B. Gatling, also lived in New York.

The urge to go West would hit the old inventor again, however. In late 1901 Gatling and his wife moved to St. Louis. He hoped to strike it rich one more time through agriculture-related tools and equipment. Gatling—who had first worked on creating a new steam plow, or what we know as a tractor, back in 1857—had founded the Gatling Motor Plow Company. He got busy completing a few business formalities before marketing his new motor plow. But heart trouble had bothered him for about three years, and a severe case of the grip, or flu, suddenly made his condition worse. Gatling’s son Richard Henry brought his parents back to his sister’s home in New York City in early February 1903. If Gatling had successfully completed plans for his motor plow, perhaps farmers today would be driving a Gatling tractor instead of a John Deere, Oliver, International, or other brand. But he died on February 26, 1903, and was widely mourned. Gatling was buried in the family plot at Crown Hill Cemetery in Indianapolis, his wife’s hometown, his body carried there from New York City by train.

Gatling had over fifty patents to his credit. His first, for a seed sower, was granted on May 10, 1844, and his last, for a steam plow or tractor, was dated July 22, 1902. Other members of his family were similarly creative. Jordan Gatling, Richard’s father, received patents in 1835 for a cotton thinner and a cotton seed planter. James Henry Gatling, Richard’s brother, received a patent in 1871 for the treatment of timber from old-field pines. James Henry also came within a hair of eclipsing the fame of his brother when, in May 1873, he tried to fly the first airplane made in the United States. He had conceived, designed, and built what was called a “flying machine.” Stories of his attempt to fly the plane—powered by two large fans pedal-driven by the pilot—were carried in newspapers in Raleigh and Norfolk, Virginia. The maiden flight lasted about one hundred feet and ended when the flying machine crashed into a huge oak tree on the Gatling plantation. The plane was damaged and its pilot, James Henry, banged up. Unfortunately, James Henry was murdered in 1879, thus ending his dream of flying.

After Richard Gatling died, his name slipped into obscurity. Contrary to his hopes of ending war, his most famous invention led to the smaller machine guns first used in World War I with terrible consequences. During World War II, his fame enjoyed somewhat of a revival, as two ships were named after him, a destroyer and a Liberty ship. Neither ship survives today. In the heyday of great Western movies in the 1940s and 1950s, working models of the Gatling gun often were used. In the 1960s General Electric revived the gun, manufacturing electrified Gatlings capable of firing thousands of rounds per minute. During the Vietnam War, some of the electrified Gatlings were used to equip an awesome gunship called Puff the Magic Dragon. Today most U.S. Navy warships are equipped with high-powered Gatling gun. The movies remain a popular venue for the gun, as the summer 2006 blockbuster Superman Returns featured a huge Gatling gun being operated by one of the villains.

At the time of this article’s publication, E. Frank Stephenson Jr., longtime director of the Upward Bound program at Chowan University, had authored or coauthored more than a dozen books on local history and culture including: A Photographic Remembrance; Images of America: Hertford County; and The Great American Chitlin Cookbook.