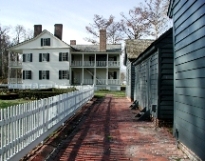 Somerset Place, located in Washington County, was one of North Carolina’s largest plantations. Bordering on the shores of Lake Phelps, Somerset had more than two thousand acres of farmland and another 125,000 acres of cypress and white cedar forests. Mary Riggs (1808–1872) of Newark, New Jersey, became the matriarch of Somerset when she married Josiah Collins III (1808–1863) in 1829.  She had gone to the same school in New York City that Josiah’s five sisters had attended. After the wedding the young couple made Somerset their home. Josiah had inherited the plantation from his grandfather, the first Josiah Collins of Edenton. Somerset was also the home of more than three hundred slaves, most of whom were women.

Life at Somerset Place revolved around farming. Josiah and the overseers kept good records each year to prepare for the next year’s planting season. Most of Somerset’s slaves were field hands who labored five days a week from sunrise to sunset and until noon on Saturdays. Each morning the overseer had the horn sounded to begin the workday. The field hands were divided into gangs assigned to different tasks and different fields.

Sixty percent of Somerset’s field hands were women and they labored in the fields alongside the men. In the winter months, women and the older children cleaned out the ditches, cleared the fields of weeds, cleaned the roads, repaired and built fences, chopped wood for the wood house, and burned wood to make charcoal.  In the spring, men, women, and children prepared the fields for planting. Children planted the potatoes, turnips, and flax. During the herring season, they were sent to dip herring out of the canal. There were two harvest holidays, one in June after the wheat harvest and another in October. The slaves also had a five-day holiday at Christmas. Those who had family members in Edenton were sometimes allowed to visit them then.

Women who were too old for field work were given jobs closer to the Big House like weeding the gardens, milking the plantation’s fifty-two cows, watching over the herd of 225 sheep, tending the chicken yard and pigpens, or caring for the little children whose mothers worked in the fields. One of those who worked with the older women was Rebecca “Becky” Drew (1825–1901).  Becky had been born in Edenton at another Collins plantation and had been sent at age fifteen to work in the fields at Somerset Place. Homesick for her mother and family, Becky was caught trying to run away and was put in the stocks overnight. Unfortunately, the night turned cold, her feet became frozen, and she lost circulation in both legs. Her feet had to be amputated. Despite her handicap, Becky could still walk and was able to do small jobs.

Charlotte Cabarrus, the Collins’s family housekeeper, was born in Edenton about 1800. She and her family had been freed by their owner, Auguste Cabarrus. Because she was free, Charlotte was the only black on the plantation to be paid for her work. She was hired when Josiah and Mary first came to Somerset Place. When the Collins boys were small, she was their nurse. The boys were very fond of Charlotte and called her “Shish.” Because Mary Riggs Collins was not born in the South, she was not fully prepared to run a large plantation household, unlike most wealthy southern women. Charlotte was her helpful second-in-command. It is likely that she guided her mistress in the effective management of the household. Charlotte also helped those slaves who were sick.

Mary loved to entertain and frequently had members of her family come from New Jersey for long visits. One of her greatest pleasures was the flower garden that she developed near the Big House alongside the canal. An experimenter with flowers, Mary had a greenhouse near the kitchen. There, she could plant new varieties of flowers for her garden. When her neighbor, Caroline Pettigrew, asked for some ivy, Mary shocked Caroline by bringing the ivy cuttings and planting them herself. Caroline thought Mary would have sent one of the three slaves who helped her in the garden.

In June 1860 Mary suffered a severe stroke that left her partially paralyzed and unable to write or speak. Her new daughter-in-law, Sarah “Sally” Rebecca Jones Collins, suddenly found herself in charge of the large household at Somerset Place. Sally was twenty-seven years old and had recently married the Collinses’ oldest son, Joe (Josiah IV). Born in Hillsborough, Sally was sent to school in the North but had been taught how to manage a plantation household by her mother, also the mistress of a large plantation. In December 1860 Sally had her first child, whom she named for her mother-in-law.

During the Civil War, the Collins family left Somerset Place in care of the overseer. Many of the slaves were transported up-country to a plantation in Franklin County called Hurry Scurry. The Collinses hoped to keep the slaves away from the Union forces that took over most of eastern North Carolina.

Josiah Collins III died in 1863. Mary Collins and her sons returned to Somerset Place after the war. The plantation was never as profitable as before the war, and they gave up farming there. Most of the freed slaves moved away from the plantation in search of employment. For many years, Somerset Place was farmed by others. In the 1950s the State of North Carolina took over most of the plantation property. The Big House and outbuildings were restored and are now open as a state historic site.

John Sykes is a former researcher with the Historic Sites Section, Division of Archives and History, Department of Cultural Resources. At the time of this article’s publication, he was a graduate student in southern history at the University of Alabama. He is a former member of the THJHA.