North Carolina in the Civil War

North Carolina joined the Confederacy on May 20, 1861. It was the second-to-last state to leave the Union.  While seven states from the Deep South seceded as a direct result of Abraham Lincoln’s election to the presidency, North Carolina joined Virginia, Tennessee, and Arkansas in initially choosing to remain within the Union.   After Confederate forces in Charleston, South Carolina fired on the Federal garrison at Fort Sumter in April 1861, however, the state’s position changed dramatically.  When Lincoln called for 75,000 volunteer soldiers to crush the rebellion of the southern states that had seceded, North Carolina opted to become one of the eleven states of the Confederacy rather than fight against its neighboring states.

Though the state had officially joined the Confederacy, North Carolinians remained divided over whether to support the Union or Confederate war efforts throughout the Civil War.  A large proportion of the state’s white population supported the Confederacy; of the approximately 150,000 white men in North Carolina between the ages of 15 and 49 when the Civil War began, almost 125,000 (or more than 80 percent) served in the Confederate Army at some point during the war.  Over the course of the war, 24,000 of these men deserted their military units.  These numbers only partly reveal the extent of Confederate loyalty in North Carolina, however.  In 1862, the Confederate national government passed the first in a series of conscription acts, requiring that physically able men of military age serve in the army.  While many of North Carolina’s Confederate soldiers volunteered for service because of a personal commitment to the Confederate cause, others joined the army under threat of imprisonment or death if they refused.  Whether they volunteered or were conscripted, North Carolina’s Confederate troops suffered heavily during the Civil War: between 33,000 and 35,000 died in battle, of wounds, or of disease between 1861 and 1865. 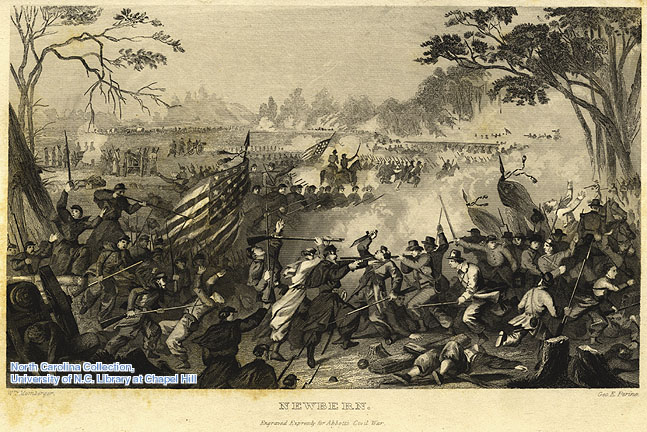 Due to its geographic location away from major rivers and other strategic objectives, North Carolina saw relatively few significant military campaigns during the Civil War.  Until the last year of the war, most military action in the state took place along the Atlantic coast.  In the spring of 1862, a Union military force under Major General Ambrose Burnside landed from the sea and captured Hatteras, Roanoke Island, and New Bern.  In the spring of 1863, Confederate forces under Lieutenant General James Longstreet attacked Union garrisons in Washington as part of an effort to gather provisions for men and horses before Robert E. Lee’s Army of Northern Virginia began its Gettysburg campaign. Other major campaigns in the eastern part of the state included the Confederate attack on the Union stronghold at Plymouth from April 17-20, 1864, which resulted in the town’s capture.  The port city of Wilmington emerged as an important center for Confederate commerce with Europe, with ships seeking to run the Union blockade often based their operations in that city.  As Union forces succeeded in capturing other major Confederate ports, Wilmington remained the final major coastal city under Confederate control.  After a combined Union land and naval attack on Fort Fisher, the Confederate fortress defending the city, Wilmington fell to Federal forces on February 22, 1865.  As Confederate resistance in other parts of the South collapsed in 1865, North Carolina found itself on the front lines of major military campaigns.  In the spring of 1865, the state witnessed the largest battle to take place within its borders, as Confederate General Joseph E. Johnston attacked Union forces under the command of Major General William T. Sherman at Bentonville on March 19, 1865.  The disbandment of the Confederacy’s last major field army, the Army of Tennessee, took place when Johnston surrendered to Sherman at Durham Station on April 26, 1865.  Despite the lack of major battles in North Carolina, the state’s soldiers saw action in all of the Civil War’s significant military campaigns.  In Robert E. Lee’s Army of Northern Virginia, North Carolina troops earned a reputation as determined, steady soldiers, but at a very high cost.  North Carolina regiments also participated in campaigns in the war’s western theater. At many major battles, including Chancellorsville and Gettysburg, North Carolina lost more soldiers than any other Confederate state.

The Civil War changed forever the situation of North Carolina’s more than 360,000 African-Americans.  At the war’s outbreak, more than 330,000 of the state’s African-Americans were enslaved.  As Union armies entered the state’s coastal regions, many slaves fled their plantations to seek the protection of Federal troops.  Once within Union lines, they built fortifications and served as domestic laborers, and more than 5,000 African-American men joined Union Army regiments.  Many former slaves took the opportunity to leave North Carolina for the North, emigrating to places such as Worcester, Massachusetts during the war years.  Under the terms of Abraham Lincoln’s Emancipation Proclamation, any slave in Confederate-held territory in North Carolina was granted his or her freedom on January 1, 1863.  In reality, most of North Carolina’s slave population remained behind Confederate lines and could not receive their freedom until the end of the Civil War.  The ratification of the Thirteenth Amendment in December 1865 permanently ended slavery in North Carolina and the rest of the United States.

How were those left at home

How were those left at home impacted during the war? How did Sherman’s march across the-state affect communities in his path? Are there dairies/letters of day to day life of NC citizens during this time period w
which are available to the public?

Thank you for visiting NCpedia. You have a lot of great questions. I recommend looking at the "additional resources" listed on the North Carolina in the Civil War page. You may also find the Civil War Digital Collection (http://digital.ncdcr.gov/cdm/search/collection/p15012coll8) on North Carolina Digital Collections (http://digital.ncdcr.gov/) useful.

i need to know how north

i need to know how north carolina was economically impacted.

Thank you for your question. Please see this article from the National Park Service on how the Civil War affected Southern States:

can you tell me how North

I hope I can find the thing I

can you help me i'm looking

can you help me i'm looking for how many men fought in the civil war.

The number is uncertain, but it is estimated that about 2.75 million Americans fought in the Civil War.

this great stuff for my reach

this great stuff for my reach on the civil war project.