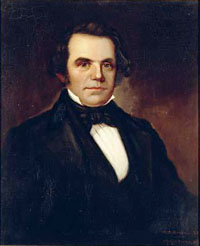 Henry Toole Clark (1808-1874) was the second of three chief executives to serve North Carolina during the Civil War. The son of Maj. James W. and Arabella Toole Clark, he was born on February 7, 1808, on his father’s Walnut Creek plantation in Edgecombe County. He studied first in the school of George Phillips in Tarboro and then attended school in Louisburg before entering the University of North Carolina from which he was graduated in 1826. Although he studied law and passed the bar, he never practiced the profession. Instead, he returned home to manage his father’s plantation and business interests that extended as far as Alabama and Tennessee. In 1850 Clark married a cousin, the widow Mary Weeks Hargrave, daughter of Theophilus Parker of Tarboro; they would have five children.

After brief service as the Edgecombe County clerk of court, his fellow citizens elected Clark to the state senate in 1850. He was returned in every election through 1860. A Democrat and member of the planter aristocracy, he nevertheless promoted internal improvements, seeking and acquiring an appropriation to build a plank road from Tarboro to Jamesville. His high character and strong moral values commanded the respect of both parties; thus, he was elected president of the senate in 1858 and 1860. When Governor John Ellis became seriously ill in June of 1861, it fell upon Clark, as president of the senate, to assume the duties of the chief executive. The position was made official by the death of Ellis on July 7.

The war dominated Clark’s administration. He had been a secessionist, and in his first message to the legislature on August 16, he declared the cause of the Confederacy to be just, offering a plan of preparedness for defense of the state, particularly the long, exposed coastline. His suggestions, however, were overridden by the Confederate authorities in Richmond who had assumed control of all military affairs and turned a deaf ear to the governor’s request for assistance. With Union occupation of eastern North Carolina, the citizens unfairly blamed Clark for their problems. A man of modest political talent and lacking personal charisma, the governor was unable to boost morale or rally the people to the Confederate cause. He did not run for a full term in 1862.

Clark held some local offices in Edgecombe County after the war but ventured back into the state arena for only one term in the senate in 1866-1867. He retired to his plantation where he died in 1874. He was buried in the yard of Calvary Episcopal Church in Tarboro.