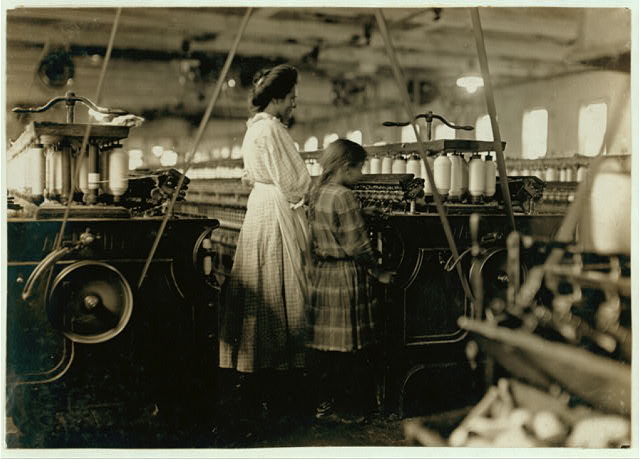 The southern textile industry relied on the family labor system. This meant that the industry’s growth depended to a large extent on the labor of children. Between 1880 and 1910, manufacturers reported that about one-quarter of their workforce was under sixteen years of age, and many more child workers went unreported. Indeed, in the industry’s early years, youngsters of seven or eight commonly doffed, spun, and did all sorts of casual labor. Originally, the official definition of “children” applied to youngsters up to age eight, but later it rose to age twelve, then fourteen, and finally sixteen. Nevertheless, young people remained crucial, both to the industry’s profit margins and to their own families’ survival.

Women and children led the first wave of migrants to the region’s mills, and manufacturers matched them with the low-skill jobs created by the advent of ring spinning. A study of women and children laborers conducted by the United States Bureau of Labor in 1907–1908 found that half the spinners were under fourteen and 90 percent were under twenty-one. As mill worker Naomi Trammel put it, “That’s where they put the children. You could run a frame [spinning] where you couldn’t run anything else.”

Critics of child labor were not hard to find. In the 1880s and 1890s, the opposition was led by the Knights of Labor, and the National Union of Textile Workers (NUTW), who complained that the low wages paid to children held down the earnings of adults. But after the turn of the century, a new group of middle-class social reformers joined the child labor crusade. Mill managers themselves were divided on the issue of child labor. Some firmly believed that hard work, commencing at a young age, was the best education available. Others championed the practice as a necessary evil in the natural progress of society.

Bit by bit, reformers chipped away at the opposition. By 1913 North Carolina, South Carolina, Alabama, and Georgia had laws that prohibited the employment of children under twelve and restricted the hours of labor for those below fourteen. Exemptions and lack of enforcement, however, enfeebled state regulations. The 1907–1908 Bureau of Labor study found that an astounding 92 percent of the mills in South Carolina and 75 percent of those in North Carolina ignored child labor regulations. Mill worker Flora McKinney’s boss was one of those who paid little attention to the law. “When I got old enough,” she remembered, “well, I really weren’t old enough, but they’d take children to work then. We were supposed to be twelve years old before we could go to work, but I’ve hid from inspectors a lots of times. They’d come through and the section in front of us would send word to hide the kids, and we’d run to the water house. Then we’d all cram in there ’til they left.”

Child labor involved more, however, than the exploitation of youth. There were stories behind the expressions on workers’ faces captured on film by photographer Lewis Hine. Some of these stories fit neither the rationalizations of mill owners nor the fears of reformers. Millwork was a source of pride as well as pain, of fun as much as suffering; and children made choices, however hedged about by their parents’ authority and their bosses’ power.

Until the 1920s, no barbed-wire fences, locked gates, or bricked-in windows separated the factory from the mill village. Children could easily wander in and out of the mill, and their first “work” might be indistinguishable from play. After school and in the summers, Emma Williams accompanied her mother to the mill.  “I’m sure I didn’t work for the money. I just wanted to work, I reckon. Oodles of kids. All of us used to do it together. [We] didn’t do much, and it was real fun. I guess maybe one reason that it was fun was because that was the only time we got with other children.”

Most children first learned about factory labor when they tagged along with a parent or sibling, carried hot meals to the mill at dinnertime, or stopped by after school. But this casual contact had serious consequences, for on such visits, relatives began teaching children the skills they would need when they were old enough for jobs of their own. Ethel Faucette carried lunch to her sister at the mill.  “While she was eating,” Faucette explained, “I learned how to work her job. I was already learned when I went to work.”

Playing and helping could thus shade into full-time work. But getting that first official, full-time job was a major turning point. Managers, parents, and children themselves influenced the decision. Occasionally, mills openly dictated the age at which a child had to begin work. Alice Evitt preferred millwork to schoolwork. “They’d let you go in there seven, eight years old,” Alice recalled. “I’d go in there and mess around with my sisters; they’d be spinning. I liked to put up the ends and spin a little bit, so when I got twelve years old, I wanted to quit school. So I just quit and went to work, and I was twelve years old!”

Mill managers expected children to master their jobs within a set length of time, usually about six weeks. During that period, children worked for free or for a token wage. “I don’t think they paid us anything to learn. But after we learnt, we got a job, a machine of our own.”

Almost all workers recalled proudly their ability to learn their jobs despite their youth. Naomi Trammel was an orphan when she went to work. “Well, I didn’t know hardly about mill work, but I just went in and had to learn it. Really, I had to crawl up on the frame, because I wasn’t tall enough. I was a little old spindly thing. I wasn’t the only one, there’s a whole place like that. And they had mothers and daddies [but they] wasn’t no better off than I was. They had to learn us, but it didn’t take me long to learn. They’d put us with one of the spinners and they’d show us how. It was easy to learn—all we had to do was just put that bobbin in there and put it up.” Children learned quickly because most entry-level jobs required more dexterity than technical know-how. It took a while to become proficient, but most children could learn the rudiments of spinning, spooling, or doffing in a few weeks.

At the time of this article’s publication, Robert Korstad was an assistant professor of public policy studies and history at Duke University. This article was adapted from Like A Family: The Making of a Southern Cotton Mill World, by Jacquelyn Dowd Hall, Robert Korstad, Mary Murphy, James Leloudis, Lu Ann Jones, and Christopher B. Daly. © 1988 by the University of North Carolina Press. Used by permission of the publisher.