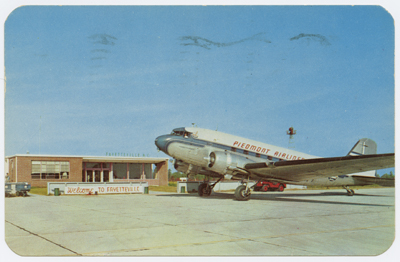 Tom Davis was excited. Wearing a gray suit but no overcoat for the chilly morning, he greeted everyone in the crowd by name. He had worked years for this moment.

The final call came over the loudspeaker: “Ladies and gentlemen, Piedmont Airlines Flight No. 41 is now boarding at Gate 1 for Pinehurst, Charlotte, Asheville, Tri-Cities, Lexington, and Cincinnati.”

Tom Davis earned loyalty from his workers. With his wonderful memory for names, Davis organized social gatherings for the employees and their families and listened to their concerns and suggestions. “He loved his people, and they loved him,” recalled Bill Barber, a retired vice president with Piedmont.

In time, Piedmont expanded to new cities, including Washington, D.C. The airline made a profit each year; nevertheless, it was struggling financially.

In 1962 Piedmont was granted route extensions to Atlanta, Georgia, and other points that increased the company’s flight mileage by 50 percent. The key advantage of the expansion was having connecting flights to “hubs” of the larger airlines Delta and Eastern in Atlanta. (An airline establishes a hub by creating flights to several cities from the same airport and offering convenient connecting flights to passengers.) Piedmont could also offer more flights to North Carolina’s growing military bases, including Fort Bragg at Fayetteville, Camp Lejeune at Jacksonville, and Seymour Johnson Air Force Base at Goldsboro.

At first, Piedmont hired males as flight attendants because, in addition to serving passengers in flight, they were required to load and unload baggage and handle the hundred-pound entrance door on the old DC-3 airplanes. When the airline switched to newer airplanes in the early 1960s, Piedmont, like many regional airlines, began hiring female flight attendants, called stewardesses. Requirements for stewardesses were that they be in the 20-to-27-year age range, stand between 5 feet 2 inches and 5 feet 8 inches tall with proportional weight, and have 20/20 vision, short hair, and good personalities and character. The nation’s largest airlines had hired female flight attendants since their beginnings in the 1930s.

Passengers and profits increased during the decade. Net profits grew to more than $1 million in 1965 and nearly $2 million by 1967. Piedmont’s growth affected its headquarters in Winston-Salem, where office and hangar space were limited. A new office-hangar complex opened in 1968 and was more than three times the size of the facility it replaced. It could hold six jets for maintenance and repairs. Piedmont also expanded its jet fleet, relying on the Boeing 737, which at first seated ninety-four passengers. It was an easy plane to fly and could use small airports and fly long-range distances.

Piedmont hired Warren Wheeler as its first African American pilot in 1966, and Cheryl Ritchie as the company’s first female pilot in 1974. The nation’s other airlines took similar steps during this period. Hiring female pilots took longer because of concern about their handling the heavy controls. Ritchie had earned a pilot’s license while working as a stewardess for Eastern Airlines.

Howard led the effort to establish Piedmont’s first hub at Charlotte’s Douglas Municipal Airport (the name soon changed to Charlotte/Douglas International Airport). The airline had started nonstop service to Miami, Pittsburgh, Boston, Denver, Tampa, and Dallas– Fort Worth from Charlotte by 1979. Charlotte’s new terminal building and 10,000-foot parallel runways qualified the airport to serve as a hub. When the new terminal building opened in 1982, Piedmont surprised many people by having more business than arch-rival Eastern Airlines, which had long been Piedmont’s biggest competitor at the state’s largest airports.

In 1987 Piedmont began nonstop service between Charlotte and London, England, giving North Carolina a direct flight to Europe. At this time, Piedmont had a fleet of 177 aircraft carrying 23 million passengers per year to 235 locations. In the decade since 1977, the staff had grown from 3,711 to more than 21,000. As the airline got bigger, however, it cut service to cities that were not profitable, including Hickory, Rocky Mount, Elizabeth City, and even Winston-Salem.

In the late 1980s, USAir (now US Airways), with headquarters in the Washington, D.C., area, purchased Piedmont Airlines for $1.6 billion.

Piedmont is remembered for its reputation for good customer service, for the family atmosphere among its employees, and for its safety. Air Transport World magazine chose Piedmont as the Airline of the Year for 1984. To North Carolinians, Piedmont Airlines was always number one!