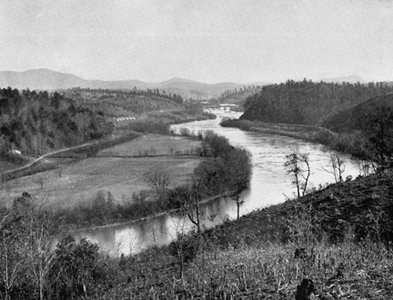 Asheville, whose namesake is North Carolina governor Samuel Ashe, is located in Buncombe County in Western North Carolina at the edge of Appalachia. Situated in thick forests along the French Broad and Swannanoa Rivers, the area was heavily traveled and settled by Native Americans, especially the Cherokee, before Europeans moved into the area after the Revolutionary War. Originally called "Morristown," it was renamed "Asheville" and incorporated in 1797.

Expansion of the western part of North Carolina, including Asheville, remained slow until the Buncombe Turnpike (1828) and Western North Carolina Railroad (1880) made inroads to that part of the state. The area's remote but increasingly accessible nature contributed to its therapeutic use for those suffering from illnesses like tuberculosis.

In 1887, George Washington Vanderbilt commissioned Biltmore House, built by Richard Morris Hunt with landscaping designed by Frederick Law Olmsted and surrounded by a sprawling 125,000 acre estate. The Biltmore Forest School, begun in part to train forest managers for the estate and nearby Pisgah Forest, was the first forestry school in America. The estate, which contributed greatly to Asheville's standing as a retreat and tourist destination, still draws large numbers of visitors today. 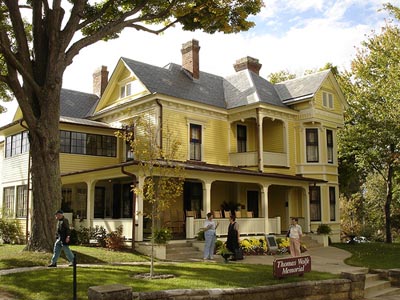 In addition to its natural attraction as a destination along the Blue Ridge Parkway, Asheville also has a history of drawing artists to the area. The author Thomas Wolfe was born in Asheville in 1900 and described a fictionalized version of Asheville in his first novel, Look Homeward, Angel. Other renowned twentieth century authors who found their way to Asheville include William Sidney Porter (O. Henry), F. Scott Fitzgerald, and Carl Sandburg. Black Mountain College, an experimental college designed to educate the whole student through living in a close-knit community, brought numerous artists, authors, and thinkers of the 20th century to the Asheville area during its brief existence (1933-1957).

With institutions like the Southern Highland Craft Guild and a downtown district that still exhibits much of its original architecture, tourism and hospitality are some of Asheville's chief industries today.

"Asheville and environs: The built environment." #

this was very helpful. i give

this was very helpful. i give 5 stars.