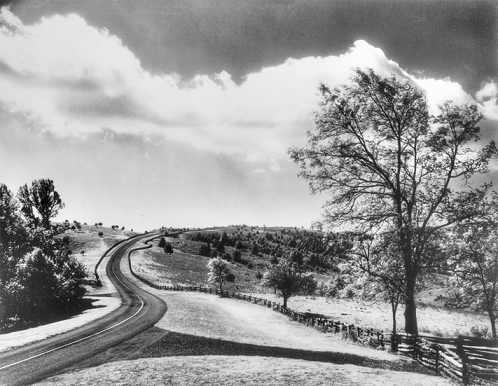 The Blue Ridge Parkway traverses 469 miles of the southern Appalachian Mountains beginning in Virginia in the Shenandoah National Park and proceeding south into North Carolina. It passes through parts of 12 of the state's counties and the Pisgah National Forest and ends in the Great Smoky Mountains National Park. The parkway was first planned as the "Crest of the Blue Ridge Highway," a visionary project conceived in 1909 by Col. Joseph Hyde Pratt, director of the North Carolina Geological and Economic Survey. From his position of leadership in the Good Roads movement, Pratt began the political and engineering work needed to build a scenic toll road extending about 350 miles from Marion, Va., to Cornelia, Ga. The route was chosen to provide views of the finest mountain scenery in the eastern United States, so that a trip along the highway would be an experience "never to be forgotten." From White Top Mountain in Virginia, the road was to run through the high country by Boone, Blowing Rock, Grandfather Mountain, Linville, and Little Switzerland, and from there through Buck Creek Gap, Stepp's Gap, Balsam Gap, and the Great Craggy Mountains into Asheville. To maximize scenic values, the route was to be located as near the summits of the mountains as possible. South of Asheville the highway would connect to Henderson, Brevard, Lake Toxaway, and Highlands, and into Georgia near Rabun Gap, finally ending beyond Tallulah Falls.

Pratt intended the road to be 24 feet wide, with a sand-clay or gravel surface and a gradient not exceeding 4.5 percent. The estimated cost was $5,000 per mile. Portions of the route had already been constructed, such as the Yonahlossee Road around Grandfather Mountain's south flank from Blowing Rock to Linville, but the more technically daunting segments through the Black Mountains and Great Craggies had not been laid out until the summer of 1910, when a surveying crew began work. Pratt apparently planned to use convict labor to help keep the costs as low as possible, although he recognized that the expense of laying the road through these rugged mountains might exceed $12,000 per mile.

Construction of new segments began by July 1912, under charter to Pratt's Appalachian Highway Company of Chapel Hill, but by World War I the Crest of the Blue Ridge project had been abandoned, presumably because of financial pressures and resource shortages. In the 1930s federal plans for the Blue Ridge Parkway, linking the Shenandoah and the Great Smoky Mountains National Parks, incorporated much of the concept and some of the actual route proposed by Pratt. In 1935 the roadway was resurrected as a project of the New Deal's Public Works Administration.

Construction of the parkway began on 11 Sept. 1935 and was completed 52 years later to the day, with the Linn Cove Viaduct dedication in 1987. Breathtaking scenery and numerous recreational opportunities make the Blue Ridge Parkway one of the most popular attractions of the national park system and an enormous boon to the local tourism industry and local land developers.