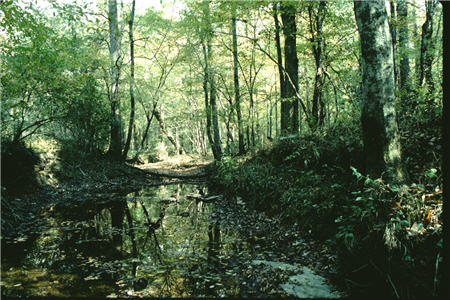 In 1799 an event occurred in the southern Piedmont that made North Carolina a very desirable place to live—the discovery of gold!

Twelve-year-old Conrad Reed was fishing in Little Meadow Creek on his family’s farm in Cabarrus County one day in 1799 when he found a seventeen-pound gold nugget. More gold was found in and along the creek, making Conrad’s father, John Reed, a very wealthy man. News of gold in Cabarrus County spread quickly. Soon gold was being found in neighboring counties—Montgomery, Stanly, Mecklenburg, Rowan, and Union—and people anxious to find gold of their own began moving into the area.

In 1825 Matthias Barringer discovered that gold could be found in veins of white quartz, and by following these veins of quartz into the ground, one could recover more gold. Prior to this discovery, all of the mining conducted in North Carolina had been aboveground, or “placer,” mining. With Barringer’s discovery of “lode,” or underground, mining, the rush to North Carolina was on. People came from far and wide to make their fortunes.

Many of the most important lode mines were located in or around Charlotte. In 1828 J. Humphrey Bissell, of Charleston, bought part of the McComb Mine and brought with him not only new technology but also “men experienced in South American mining.” At one Charlotte mine that employed almost a thousand workers, thirteen different languages were spoken. Count Vincent de Rivafinoli, an Italian aristocrat and experienced mining engineer, was one of the most cultured and flamboyant foreigners in Charlotte. As head of the Mecklenburg Gold Mining Company, he brought in as many as eighty expert miners from England, Germany, Wales, Scotland, Ireland, Switzerland, Italy, and France.

Many of the immigrants who came to North Carolina during the gold rush were single men—young or middle-aged, ambitious, and hardworking. Unaccompanied by women or children, they were able to move freely from one mining area to another. When gold was found in other southern states and then in California in 1848, many moved out of the area. The Cornish miners, however, had often moved with their families. They were known to be “skilled, superstitious, clannish,” and strongly Methodist. Unlike the single prospectors who followed the gold to California, the Yukon, and beyond, many of these Cornish miners and their families stayed in North Carolina, in the lode mining centers of Charlotte and especially Gold Hill in Rowan County.

At the time of the publication of this article, Rebecca Lewis was assistant site manager at Reed Gold Mine State Historic Site in Cabarrus County. She was program coordinator of the Tar Heel Junior Historian Association from 1999 to 2003.

I think this information is

Thanks for visiting NCpedia.You can find information about how much money the gold rush made in the late 1700s in this Gold Rush article (https://ncpedia.org/gold-rush). Please let us know if you have any other questions.

thnx for the info i girl just

thnx for the info i girl just transferred to my school named rebecca lewis funny huh?!