Transportation Improvements in the 1920s

When World War I ended in 1918 and the troops came home, folks felt optimistic about the future and eager to get on with their lives. This optimism led to an extraordinary decade that brought major changes in the way citizens traveled by rails, on roads, and in the air.

People had been traveling by train for decades. During the 1920s, Southern Railway operated one hundred daily trains throughout the state. The railroad also operated a large maintenance and repair shop at Spencer (the current site of the North Carolina Transportation Museum in Rowan County). Another large railroad, Atlantic Coast Line Railroad, located a maintenance shop in Rocky Mount and the company headquarters in Wilmington.

More than fifteen hundred towns or cities in the state had railway stations. Large stations with interesting designs still exist in Salisbury, Hamlet, Rocky Mount, and Greensboro. Stations in Wilmington and Charlotte have been torn down.

In the 1920s, railroads developed new programs for vacation travelers. Comfortable Pullman cars for spending the night and quality food in dining cars made long-distance travel a pleasure. Florida was a popular destination. But railroads also encouraged visits to luxury resorts in Asheville and Pinehurst.

If someone took the train to Asheville, he or she would likely transfer to a streetcar for a ride to the destined hotel or resort. At that time, more than a dozen North Carolina towns and cities had streetcar systems, which offered convenient rides for only five cents between railroad stations, neighborhoods, and downtown areas. 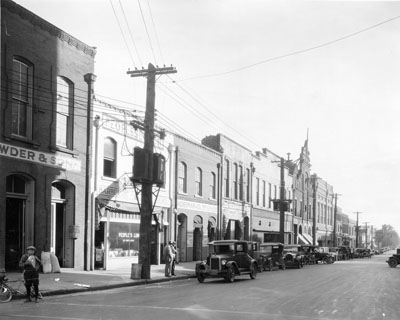 But more and more Tar Heels were buying cars for the first time. They owned 136,000 by 1921—and Model T Fords were the most popular, because of their reasonable price and reliability. Drivers liked the freedom that cars provided. However, they were frustrated at having to drive on dirt roads between towns and cities, especially during rainy or wintry weather. Mud was a huge problem.

Harriet Morehead Berry was determined to improve the condition of the state’s highways. A native of Hillsborough, she was a graduate of the State Normal and Industrial School (later Woman’s College and now UNC–Greensboro). She joined the Geological and Economic Survey in Chapel Hill in 1901 as a secretary and developed a reputation as someone who could quickly understand complex issues about highways, the environment, and employment. The survey office helped many organizations, including the North Carolina Good Roads Association.

The association had tried for many years to get roads and highways improved.  Berry knew something had to change. Beginning in 1919, she took charge of the Good Roads Association, increasing the organization’s membership from two hundred to fifty-five hundred in only two years. One historian wrote, “Under the able direction of Harriet Berry, the association demonstrated to citizens of every section of the state that the road system would benefit them directly and quickly.”

By the time the 1921 legislature met, Berry and the Good Roads Association were well prepared to influence the legislature. By that time a progressive governor, Cameron Morrison of Charlotte, and a talented chairman of the State Highway Commission, Frank Page of Aberdeen, were in office. Responding to public demand for better roads, the legislature passed the historic Highway Act, which included a one-cent-per-gallon tax on gasoline to help finance hard-surface, all-weather highways.

By 1929 the legislature had raised the gas tax to five cents per gallon. These funds allowed the state to pave more than three thousand miles of hard-surface (concrete or asphalt) highways connecting the county seats and state attractions. These routes included the state’s first three-lane (Greensboro to Thomasville) and four-lane (Charlotte to Gastonia) highways. Also in 1929 the State Highway Patrol was organized, consisting of ten officers and twenty-seven troopers who rode motorcycles. Because of these achievements, North Carolina developed a national reputation as the Good Roads State.

While travel by the state’s railroads and highways increased, citizens across North Carolina also attended exciting barnstorming shows at local airfields. These shows featured wing-walking, daredevils jumping out of airplanes with parachutes, and the opportunity for airplane rides for five dollars a person.

In May 1927 Charles Lindbergh flew nonstop from New York City to Paris in a single-engine airplane, the Spirit of St. Louis. It took him 33½ hours to travel the 3,610 miles. “Lindy Reaches Paris!” screamed one newspaper headline. This dramatic event made headlines in every newspaper in the country and made the young aviator a national hero. To further promote aviation, Lindbergh flew the Spirit of St. Louis to every state in the nation during 1927. Excited crowds saw and heard him speak in Greensboro and Winston-Salem. They wanted to fly, too.

In many areas of the state, small aviation companies experimented with carrying passengers from one city to another. In 1930 Eastern Air Transport, soon renamed Eastern Airlines, began regular scheduled flights from New York to Miami, with stops in Greensboro and Charlotte. The airline added Raleigh as a stop the next year. These flights carried both passengers and mail.

But in North Carolina, the big transportation story in the 1920s was the creation of all-weather highways that brought together counties and regions and benefited farmers and those who lived in towns and cities. The number of vehicles tripled and led to new businesses, such as car dealerships, service stations, and bus and trucking companies. Indeed, the highways earned the state a national reputation as the Good Roads State.

NC LIVE resources on the history of transportation in North Carolina.

Resources on transportation in Learn NC.