"The Day the Lights Came on" 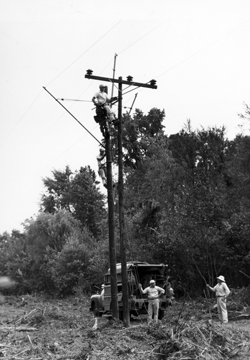 In the mid-1930s only 3 percent of the farms in North Carolina—and less than 11 percent of those in the United States—had electricity. Private power companies provided electricity to residents of cities and towns but were slow or unwilling to serve rural people. Farmers, the private utilities argued, were unprofitable customers because they used too little electric power to justify the cost of building lines in a sparsely populated countryside.

The picture began to change after 1935, when President Franklin D. Roosevelt created the Rural Electrification Administration (REA). This New Deal agency offered low-interest government loans for the construction of power lines in rural areas. Most of the money was borrowed by nonprofit electric cooperatives. These were groups of rural people who organized themselves in order to bring electrical power to their communities. By 1963, about 98 percent of Tar Heel farms had electricity, thanks in large measure to the REA. Today 28 electric cooperatives still serve customers from the beaches of Hatteras Island to the mountains of Ashe County.

Getting electricity marked a turning point in the lives of thousands of rural North Carolinians. The first night Sam Oswalt’s Iredell County family enjoyed electric lights, “We just felt so good and rejoiceful that we thanked the Lord for it.” A Gates county farm woman whose family received electricity in 1939 felt like they were “coming out of the dark ages.”

Without electricity, accomplishing the most routine of tasks required strong muscles and ingenuity. A United States Department of Agriculture study conducted in 1919 found that rural families spent 10 hours a week simply hauling water from wells and springs. Without refrigerators, rural people had to invent ways to keep food fresh. In Edgecombe County, W. Kitchin Benson’s mother “would put butter in a bucket in the summertime and put it down in the well, not quite to the water. That was the cooling system we had.” Every morning, whether temperatures were hot or cold, woodburning cookstoves had to be stoked. “It was fine in the wintertime,” remarked one woman, “but in the summertime it would burn you up. The kitchen would be like an oven. The sweat would pour off of you.” Henry P. Lucas milked his 25 dairy cows by hand everyday. “That’s the reason I got these crooked fingers,” he explained. “See both of them’s crooked? Milking cows.”

Although the REA provided loans and technical assistance, leaders of rural communities had the responsibility of organizing the cooperatives. They signed up prospective customers, collected the initial $5 fee, demonstrated to the federal government that the cooperative was a responsible borrower, and obtained permission to string lines across a farmers’ property. This organizing could take a lot of coaxing. Some farmers, accustomed to living without electricity, considered it a luxury. Others, still reeling from the Great Depression, found $5 hard to come by.

Hubert Prevatte remembers how the dream of electricity for his Robeson County neighborhood slowly hardened into reality:

There was a requirement of three members to the mile that we had to meet. And it took hard work, pretty much persuasion because so many of them were not interested at all. I used to work in the fields hard all day. Then after supper walk to the neighbors’—a mile sometimes—to try to secure enough people to make the requirement of three customers to the mile. I did that night after night over a long period of time.

Naturally, when we got the lines we were just thrilled to death; we were being rewarded for all our efforts. It created a lot of excitement. Children in the neighborhood came to watch the construction of the lines. Their dads were glad to help out in any way. In one particular instance I recall I took my own team of horses and pulled lines through the Lumbee River swamp because the cooperative did not have equipment at that time to go over these rough places. And when we got to the river with the lines then the neighbors got together with the construction crew and pulled the lines by hand across the river, swam the river and pulled the lines across.

Once electric power reached their homes and farms, people had to put it to use. Irons and radios often topped the list of first household appliances purchased, with refrigerators, washing machines, electric ranges, and vacuum cleaners added as budgets allowed. Listening to the “Grand Ole Opry” broadcast from Nashville, Tennessee, became a favorite Saturday night pastime in many farmhouses. Running water made indoor bathrooms possible and slowly eliminated outdoor “johnny houses.” The new source of power even affected holiday customs. For the first Christmas with electricity at H. E. Daughtry’s home in Perquimans County, his family “... got a tree, we didn’t buy one then because there were plenty trees in the woods, and put it on the front porch. We bought us a set of lights, and that’s what we placed on that tree. It was one of the most beautiful trees I’ve ever seen.”

Electricity was crucial for the development of dairy and poultry farms. After electric power reached Ashe County farm that Fredda Davis and her husband owned, “We could get us a milking machine, milk two cows at a time. We had these coolers that we could put that milk in and keep it cool until a milk truck picked it up... Then the lights, there were the lights, and could go in there after dark. We could do that milking because we had sufficient lights to see how to do all the operations.” A Randolph County woman described how electricity reorganized the work on her family’s poultry farm. “Before we had power my husband, my little boy, and myself spent all our waking hours carrying water to chickens. When we got electricity in here and a pump in the well, we built two additional [poultry] houses, and my husband can take care of them with the automatic feeders and automatic waterers. We’ve got time to live.”

Supplying electricity to rural North Carolinians was not accomplished overnight. The rationing of materials during World War II slowed line construction and made appliances scarce. Many farm families did not receive electricity until well into the 1940s and 1950s. Nevertheless, the electricity made possible by the REA transformed rural life. It altered how people earned their livings, stored their food, washed their clothes, and illumined (lighted) their homes. Small wonder, then, that North Carolinians who came of age with the REA still remember vividly “the day the lights came on.”

At the time of this article’s publication, Lu Ann Jones was a consultant historian for the North Carolina Association of Electric Cooperatives’ Oral History Project.

I grew up in rural Cleveland

I grew up in rural Cleveland County. We had no electricity until after 1950! All farm labor was done by hand. Our four room schoolhouse had only lamps and lanterns! Electricity was a fantastic blessing to all farmers in that area! The electric co-op was still there in 2000. Thanks to FDR's New Deal!
Jake