Colonists on North Carolina’s western frontier wanted to continue expanding westward, and they resented British attempts to keep them out of Cherokee lands. The Cherokee knew that they would be pushed out of the way if the colonists won their war for indepedence. The Cherokee therefore sided with the British, and in the summer of 1776 they attacked white settlers along the frontier.

In response, North Carolina revolutionaries attacked Cherokee villages. Led by General Griffith Rutherford, they burned villages and destroyed crops and food supplies. White settlers and the Cherokee hated each other, and their resentment now turned into barbaric violence. We’ve seen resentment turn to brutality before, and, unfortunately, we’ll see it again in the next chapter. 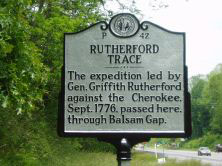