The Cherokees' and Catawbas' Stance in the Revolutionary War

It is tempting to think of the American Revolution as a war between the American colonists on one side and the British on the other. This was not the case. Many colonists did not want independence from England. These people, called loyalists, supported the king. Some loyalists fought against their neighbors, called patriots, who wanted independence. North Carolina’s Native American population also had to decide whether to support the Revolution.

War caused some of this population loss. Among the bloodiest was the war fought by the Tuscarora tribe from 1711 to 1712. An even worse enemy was disease. The American Indian tribes and their people had no natural immunity to many European diseases, including measles and typhus. The deadliest killer, however, was smallpox. Time after time this dread illness destroyed entire American Indian villages. An epidemic of smallpox killed thousands of Cherokee people in 1738 and 1739. In 1759, smallpox killed about two-thirds of the Catawba people, leaving about 500 of that tribe’s population of 1,500.

The difficulties between the colonists and the government in England seemed to threaten the colonists’ trade. They wondered what they should do. Should they stay neutral? Was it even possible to stay neutral? Should they side with the British, who promised them weapons? Or should they side with the patriots, who promised them weapons but also kept taking their ancestral lands?

This powerful tribe lived in the mountains of present-day North Carolina, Georgia, and Tennessee. They spoke the language of the Iroquois nation but were so spread out that they spoke three separate dialects. In 1775, there were about 12,000 Cherokee people in North Carolina. They lived in villages called Middle Villages or Middle Towns, and grew crops, especially corn. Some lived in log cabins similar to white settlers’ cabins. They had lived in these mountains a long time and regarded the mountains as their home forever, and they were determined to fight to protect their lands.

As the settlers pushed west into the backcountry, they came closer to the Cherokee homeland. In the late 1750s and early 1760s, the English fought the French and Indian War against the French colonies to the north and west. At first, the Cherokee people supported the British colonists in that war. But after some of their warriors were killed by settlers in Virginia, the Cherokee people changed their minds. The tribe then fought several battles against the English settlers in North Carolina. The English defeated the Cherokee, other tribes, and their French allies in that war.

In 1763, King George III prohibited white settlement across the Appalachian Mountains to the west in the Proclamation of 1763. But settlers, among them Daniel Boone, violated this law. They wanted the Cherokee peoples' land. Most of them thought that American Indian people were simply an obstacle to be brushed aside. The Cherokee people hated the settlers, so they decided to side with the British government. They thought this was their best chance to push back the tide of white settlers. They felt that if the British won the war, the British king would reward their support and stop settlers from going to the other side of the mountains and taking their land.

This decision for war was not made hastily. Many meetings were held and every warrior of the tribe had a chance to speak his mind. Other American Indian tribes who were allied with the British tried to talk the Cherokee people into joining their efforts. The British wanted their American Indian allies to wait and together attack the settlers at the same time. Finally, the Cherokee people decided they would not wait for the British or anyone else and would launch their own attack.

Early in the summer of 1776, the Cherokees planned attacks all along the southern frontier. A half-American Indian woman named Nancy Ward warned the settlers of the plan. Many settlers found refuge at Fort Dobbs, Old Fort, Fort Defiance, and other safe places. When they returned, they found their homes burned and their crops destroyed. Not all were so lucky. About forty settlers had been killed in North Carolina by the end of July. The biggest fight was at Eaton’s Station, in present-day Tennessee. Here a young Cherokee warrior named Dragging Canoe led a war party against a group of frontiersmen in a bloody attempt to stop white colonists from settling on Cherokee land.

General Griffith Rutherford led more than 2,000 North Carolina troops into the mountains. They reached the Cherokee Middle Towns in the middle of September but found the villages deserted. The Cherokee soldiers had retreated to strongholds or villages deeper in the mountains. Rutherford burned their villages and destroyed their food supplies and crops waiting to be harvested.

The almost 2,000 South Carolina troops were commanded by Colonel Andrew Williamson. They came into North Carolina from the southeast and walked into ambush at a place called Black Hole, near present-day Franklin. After a two-hour battle, the Cherokee fighters retreated. The Cherokee fighters might have won the battle if they had not run out of ammunition. Colonel Williamson’s troops continued their advance and joined forces with Rutherford’s troops on September 23. The combined army continued their destruction, meeting only scattered resistance.

Rutherford and Williamson took their troops home in early October. About the same time, another group of North Carolinians and Virginians commanded by Colonel Williams Christian, came into the mountains. They burned more villages. Many Cherokee people suffered famine that year.

The majority of Cherokee fighters returned home in the autumn of 1776 and began rebuilding their villages. They desperately needed a peace treaty. One elder, named the Raven, traveled hundreds of miles seeking peace. Another group went all the way to Williamsburg, Virginia, to meet with Virginia officials. The Cherokees signed a peace treaty in July 1777. By this treaty, the Cherokees gave up more of their land and agreed to return hostages and property. In exchange the settlers agreed to respect the Cherokees’ property rights.

The treaty should have ended hostilities, but it did not. Many settlers broke the treaty. One group of young Cherokee warriors refused to accept the peace treaty. They were led by Dragging Canoe. These warriors moved farther into the interior of North Carolina, not far from present-day Chattanooga, Tennessee. They built a group of villages that became known as the Chickamaugas. Dragging Canoe and his followers maintained their allegiance to the British even after the peace treaty was signed. Fighting continued throughout the war. An expedition in 1780, under the command of John Sevier and Arthur Campbell, burned a large Cherokee village and some of the Chickamauga villages. Twenty-nine Cherokee people were killed in this expedition, but only one patriot. Afterwards, the Raven told a British official, “The Rebels from Virginia attacked… in such numbers last fall there was no withstanding them, they dyed their hands in the Blood of many of our Women and Children, burnt 17 towns, destroyed all our provisions by which we and our families were almost destroyed by famine this spring.”

The war was devastating for the Cherokees. They lost warriors, property, and influence. Most important, they continued to lose their land to settlers. In the 1777 treaty talks, a Cherokee man named Toqua told the settlers: “We are now talking together. The Man above has put it into our hearts to do so this day. But brothers, do you remember that the difference is about our land.” He was right. The difference was about their land. Well into the 1800s, the Cherokees surrendered land in treaty after treaty, only to see settlers ignore the stipulations of the treaties. In the 1830s, most of the tribe had been forcibly removed to Oklahoma by Andrew Jackson's Indian Removal Act, many dying during the trek called the “Trail of Tears.” A few Cherokee tribes and people remained in the east. Many of their descendants continue to live in the North Carolina mountains.

When Colonel Williamson invaded the Cherokee homeland in 1776, he had twenty American Indian scouts with him. At first, the Cherokee people thought the scouts were their own tribesmen; then they noticed that they were wearing deer tails in their hair. They realized that the scouts were from the Catawba tribe, and the deer tails were identification so the Americans would recognize their Catawba allies.

The Catawba people lived in the Carolina Piedmont. They were not related to the Cherokee people. They spoke a completely different language called Siouan. Their name survives today in Catawba County and the Catawba River. The Catawba tribe usually got along well with their white neighbors. They were important trading partners. However, they suffered from the same diseases that ravaged other tribes. They survived as a tribe only by taking in other smaller tribes which had also lost many of their people.

The Catawba people suffered for this decision. The British controlled the area around their reservation for much of 1780 and early 1781. The Catawba people fled when the British troops approached. The troops commanded by Lieutenant Colonel Francis Rawdon, burned the Catawba village and any Catawba homes they could find. When they returned, they found that “all was gone; cattle, hogs, fowls, etc., all gone.” Still, the Catawba people continued to fight against the British. They fought in several battles in North Carolina, among them at Guilford Courthouse. Many Catawba soldiers served under South Carolina General Thomas Sumter. The Catawba soldiers usually fought as a unit under the command of a white officer. However, one company of forty-one men was commanded by a tribesman named Thomas Drennan. This group served with General Sumter. A Catawba man known as New River led a unit of American Indian soldiers fighting in North Carolinian William Davie’s army. Another Catawba hero, John Nettles, had been educated at the College of William and Mary in Williamsburg, Virginia, and was a major in the militia.

The Catawba people earned the gratitude of Carolinians for their support during the Revolution. This gratitude helped them hold onto their reservation. After the war they continued to live there, and some of their descendants live today on the reservation.

The Catawba people remembered the war. One member of the tribe, Peter Harris, had captured a gun at the Battle of Stono and proudly carried the gun with him for the rest of his life. Another member of the tribe, whose name we do not know, saved Captain Robert Craighead’s life at the Battle of Hanging Rock. Each year he would appear at Craighead’s plantation so that he could be thanked once again by the soldier.

The American Indians in North Carolina fought beside their chosen white allies in the American Revolution. But they fought for their own reasons. They were not concerned about the rights of free-born Englishmen. They were interested in protecting their own lands. The Cherokee people and the Catawba people made their decisions for war based on their best judgment of how they could protect their lands. The Catawba tribe backed the winning side and gained some benefits. Whatever the reasons, these two important American Indian tribes were active participants. It was their war, too.

"An Accurate Map of North and South Carolina With Their American Indian Frontiers, Shewing in a distinct manner all the Mountains, Rivers, Swamps, Marshes, Bays, Creeks, Harbours, Sandbanks and Soundings on the Coasts, with The Roads and American Indian Paths; as well as The Boundary or Provincial Lines, The Several Townships and other divisions of the Land in Both the Provinces; the whole from Actual Surveys by Henry Mouzon and Others." Map. Originally published by Robert Sayer and John Bennett in The American Atlas (London). 1775. https://dc.lib.unc.edu/cdm/ref/collection/ncmaps/id/9632 (accessed July 11, 2018). 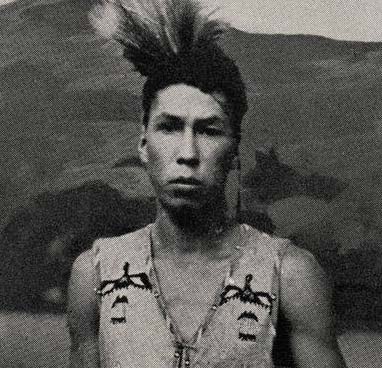 Cherokee: Disease, Destruction, and the Loss of Cherokee Land 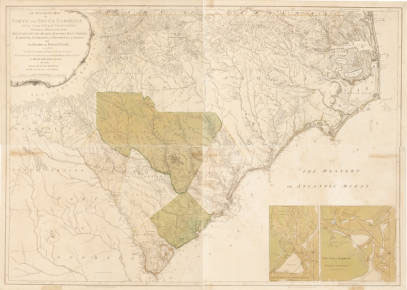 1775 "Map of North and South Carolina with their Indian Frontiers . . . whole from actual surveys by Henry Mouzon and others"