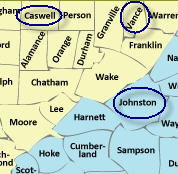 While it is common to find towns and counties in North Carolina named for Governors who held office prior to 1900, it is unlikely those places will be renamed for more recent Governors. Today, former chief executives are more likely to see a stretch of highway, a dormitory, or a horse arena named in their honor. Developers of some subdivisions, such as Governors Club in Chatham County, have named their streets for state leaders. Of the governors in the twentieth century, none have towns named for them. Gardner-Webb University in Boiling Springs bears the name of Governor O. Max Gardner. Mental hospitals are named for Governors J. Melville Broughton and R. Gregg Cherry. Even though his term in office lasted only twenty-two months, John B. Umstead has had a state park and a hospital named for him.

The situation differs when we consider governors before 1900. Eleven existing counties are named for governors: Hyde, Johnston, Rowan, Martin, Caswell, Burke, Ashe, Davie, Swain, Graham, and Vance. Martin was created in honor of royal governor Josiah Martin. According to The North Carolina Gazetteer, its name very likely would have been changed were it not for the popularity of subsequent governor Alexander Martin, who served two terms in the 1780s.

Three former counties—Archdale, Dobbs, and Tryon—were named for colonial governors. Archdale was changed to Craven in 1712, and with separation from the British Empire, proud North Carolinians could not bear to suffer the names of Dobbs and Tryon on the state map. However, Archdale does survive as a town name in Randolph County, as does Tryon in Polk County.

In fact, the former Dobbs County has been twice renamed. The current Greene County was once named Dobbs County, for royal governor Arthur Dobbs. In 1791 that name was “expunged from our map,” as historian Kemp Battle phrased it, and a new county was named to honor Secretary of State James Glasgow. Following allegations against Glasgow for land fraud, the name was changed in 1799 to honor General Nathanael Greene, a hero of the Revolutionary War battle of Guilford Courthouse. “Behold the reward of dishonesty and official corruption!” wrote Kemp Battle in 1903. Greensboro is also named for General Greene.

Other sizable towns named in honor of governors include Edenton (Charles Eden), Asheboro and Asheville (both for Samuel Ashe), Franklin (Jesse Franklin), Morehead City (John Motley Morehead), and Graham (William A. Graham). Zebulon B. Vance, the state’s Civil War governor and later a United States senator, was so popular that a county (Vance) and a town (Zebulon in Wake County) honor him.