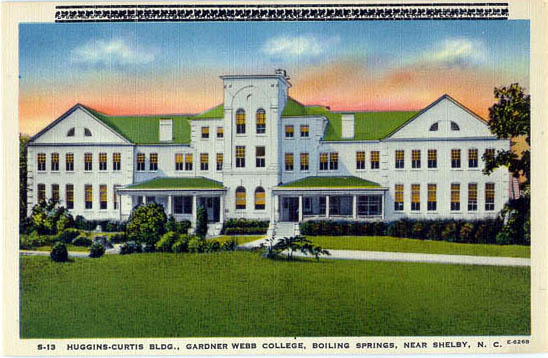 Gardner-Webb University, a coeducational institution associated with the Baptist State Convention of North Carolina, is located near Shelby in Cleveland County. The youngest of North Carolina's Baptist colleges, Gardner-Webb traces its origins to Boiling Springs High School, founded in 1905. Distinguished alumni of Boiling Springs included Wilbur J. Cash, author of The Mind of the South, and Dewey Whitaker, president of Lehigh University.

Gardner-Webb's first graduate program, in education, was initiated in 1981. In the 1980s Gardner-Webb also initiated an international study abroad program with Japan's Dohto University. To the college's graduate education program were added a master of business administration curriculum and a divinity school. In 1993 Gardner-Webb College became Gardner-Webb University. By the early 2000s Gardner-Webb had more than 3,200 students taught by approximately 135 faculty members. The university offers dual degree programs in engineering with Auburn University and the University of North Carolina at Charlotte. It inaugurated its first doctoral program, a Doctor of Ministry, in 2001.

If we wanted to provide

If we wanted to provide updates to the Gardner-Webb NCPedia entry, how would we do that?

Thank you for visiting NCpedia. I am going to forward your information to our NCpedia team.