The General Assembly of 2005 named the Southern Appalachian Brook Trout as the official Freshwater Trout for the State of North Carolina (Session Laws, 2005, c. 387). 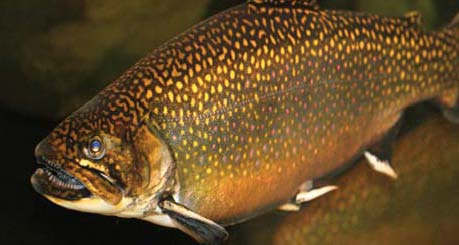 Occurs in fall, generally September through November. Females will construct a nest (redd) in gravel, and incubation period varies depending upon water temperature.

Generally short-lived, seldom longer than 4 years in the wild. 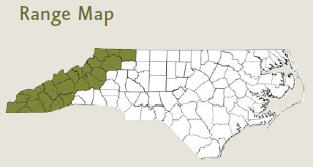 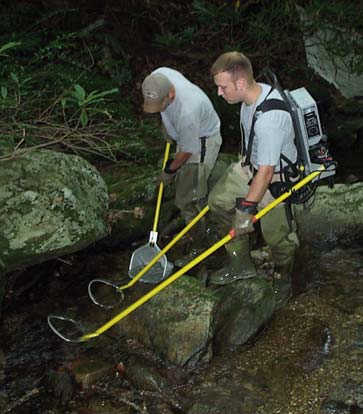 The brook trout is the only trout native to western North Carolina. Several varieties of brook trout exist within its indigenous range from the mountains of Georgia to the coastal rivers of Canada. North Carolina mountain streams once teemed with Southern Appalachian brook trout (the strain of brook trout native to North Carolina) where abundant rainfall, cool climate, cold groundwater and dense forest cover provided optimum living conditions. In the late 1800s, logging companies began to cut the vast stands of virgin timber in the mountains of the state. Early logging practices included the construction of roads and rail lines up river valleys, intensive tree cuttings on steep slopes, and the usage of splash dams to transport logs downstream. These activities caused significant damage to stream habitats. Extensive erosion and siltation from land disturbing activities limited spawning success by smothering eggs and restricting their oxygen supply, and streams that historically supported coldwater fishes were warmed due to lost canopy cover. 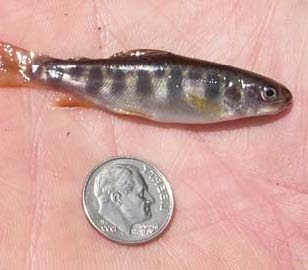 Brook trout can be distinguished by the olive-green coloration of the upper sides with mottled, dark green “worm-like” markings on their backs and tails. The lower sides are lighter with yellow spots interspersed with fewer spots of bright red surrounded by blue. The lower fins are orange with a narrow black band next to a leading white edge.

Wild brook trout are most abundant in isolated, high-altitude headwater streams where the water is free of pollution and rich in oxygen. Brook trout prefer streams with stable water flows, silt-free gravel for spawning and an abundance of pools and riffles with sufficient in-stream cover, such as logs and boulders. Young brook trout feed on small aquatic and terrestrial insects. Adults eat a wide variety of aquatic and terrestrial insects, as well as crustaceans, fish and other small vertebrates.

Decreasing daylight and temperature associated with autumn signify the onset of spawning, which typically occurs between September and November. The female will construct a nest called a “redd” in the gravel substrate. The male courts the female and will chase away intruding males. Both fish then settle into the redd and release eggs (100 to 5,000 depending on the size of the female) and sperm (milt) simultaneously. Fertilized eggs are covered with gravel by the female and remain in the redd until they hatch in the early spring. Once free-swimming fry emerge from the redd it will take them approximately two years to become mature. Generally short-lived, brook trout seldom live longer than four years in the wild, and they rarely exceed ten inches in length. 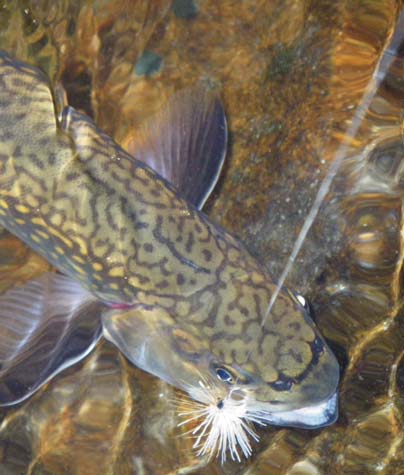 In North Carolina, brook trout are legally taken by hook-and-line sport fishing, and management is directed toward enhancing and protecting wild populations, while providing seasonal fisheries via stockings. Anglers prize brook trout for their delicate flesh and superior flavor, and also because of their willingness to take artificial and natural baits. Fishing dry flies, streamers and nymphs that imitate natural food items works well. This method is especially popular in North Carolina’s many streams that support wild trout. Fishing baits, such as worms and corn, work well for hatchery-reared brook trout. Spin casting small spinners, spoons and crankbaits can be productive as well. Check the current trout fishing regulations on the type of lures allowed as well as the size limit and creel limit for a particular trout water before fishing

Illustrated by J.T. Newman. Produced by the Division of Conservation Education, Cay Cross–Editor.

I need to know when it was

I need to know when it was adopted and why,thank you

Thanks for visiting this entry and asking your question.  If you click on the blue hyperlink text at the top of the entry Session Laws, 2005, c. 387, the link will take you to the text of the legislation adopting the Southern Appalachian Brook Trout as the State Freshwater Trout.

And here is the text of the bill enumerating the history of the fish in NC, its importance to the state's ecology and sport, among other reasons:

I hope this information helps answer your question.

I'm going to use this website if I'm researching NC

Do you even know the weight

Do you even know the weight of the trout?

That's a great question!  The size of the fish are affected by a number of things, including whether or not humans get to keep the fish they catch!

Brook trout, depending on conditions, can grow to be quite large, over two and a half feet long and up to 20 pounds.  That's a huge trout!  More typically they may grow to be 6 to 12 inches long.

thanks that was really

thanks that was really helpful!

Fantastic!  Glad we could

Fantastic!  Glad we could help!

can you put thing about

can you put thing about Lighthouses in North Carolina

NCpedia is a work in progress

NCpedia is a work in progress and new information is added as volunteers contribute entries.

We do have an entry on the Cape Hatteras Lighthouse at http://ncpedia.org/cape-hatteras-lighthouse. Entries on other lighthouses are coming, but it will likely be much later in 2011 before they are added. (They have not yet been written.) In the meantime, you may want to visit the Web site for the Outer Banks Lighthouse Society.

If you have a specific question about lighthouses in North Carolina, you may also contact Reference Services at the Government & Heritage Library.