From the North Carolina Manual

The legislative arm of the state is the North Carolina General Assembly. They enact general and local laws that promote the best interests of the state, and establish rules and regulations governing the conduct of the people. 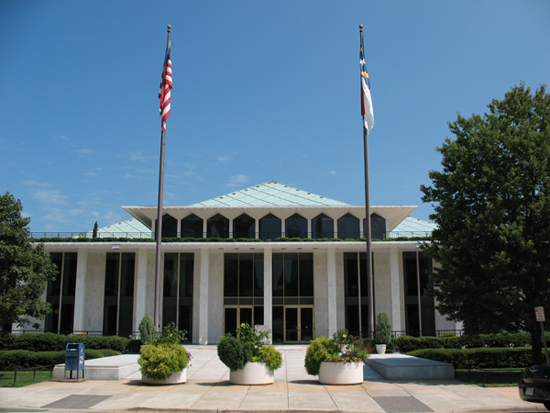 Like the federal government and almost all the other states (Nebraska being the only exception), North Carolina has a bicameral legislature, consisting of two houses: the Senate and the House of Representatives. The legislature meets annually; the so-called "Long Session" occurs in odd numbered years, while the "Short Session" occurs in even numbered years. Occasionally, in the case of a special need, the Governor may call a Special Session of the General Assembly after they have adjourned for the year.

The Senate has 50 members. Elections for all 50 seats are held every two years. The Lieutenant Governor is the President of the Senate; however, his/her main duty is to cast a deciding vote in the case of a tie. At the beginning of each biennium, the Senate chooses a President pro Tempore, who presides in the absence of the Lieutenant Governor. The most important duty of the President pro Tempore is to appoint the members to the various standing committees in the Senate.

The House of Representatives has 120 members. Elections for all 120 seats are held every 2 years. At the beginning of each session, the members of the House choose a Speaker, who presides over the business of the House. In extraordinary cases, such as in the 2003-04 biennium, when the house was evenly divided between the two political parties, co-Speakers may be chosen. As in the Senate, the most important duty of the Speaker is to appoint the members to the various standing committees.

Much of the work of the General Assembly is done by standing committees. These committees consider the bills introduced into the two houses, hold hearings, make such changes and amendments as they think necessary, and report their findings back to their respective chambers. If the report on the final version of the bill is favorable, it comes up for debate on the floor of the House or Senate. After final passage in one chamber, the bill is then sent to the other chamber, where the same events occur. A bill passed by both houses is then sent to the Governor, who may either veto the bill, or sign it into law.