Address to the Colored People of North Carolina

A complete transcription is below. 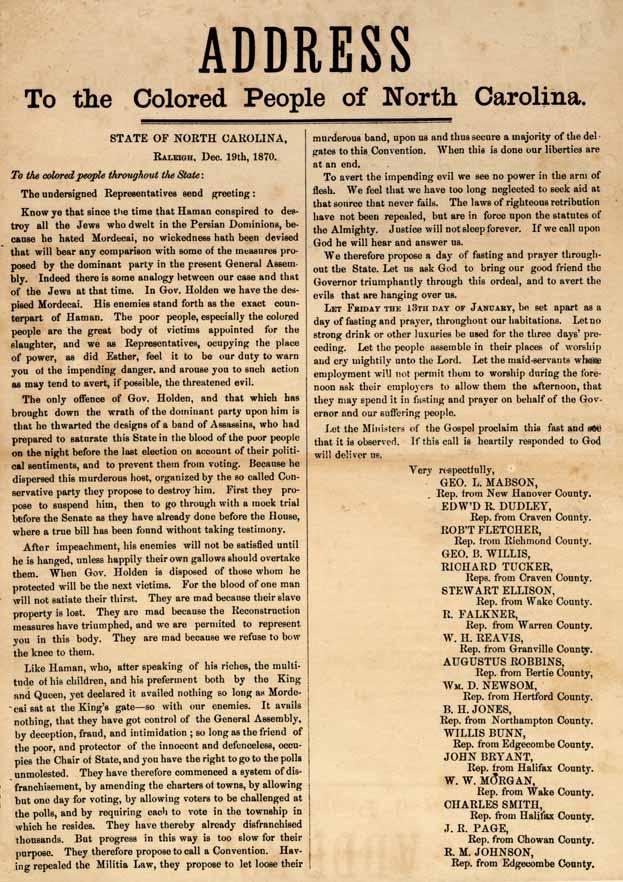 ADDRESS
To the Colored People of North Carolina.

Know ye that since the time that Haman conspired to destroy all the Jews who dwelt in the Persian Dominions, because he hated Mordecai, no wickedness hath been devised that will bear any comparison with some of the measures proposed by the dominant party in the present General Assembly. Indeed there is some analogy between our case and that of the Jews at that time. In Gov. Holden we have the despised Mordecai. His enemies stand forth as the exact counterpart of Haman. The poor people, especially the colored people are the great body of victims appointed for the slaughter, and we as Representatives, ocupying the place of power, as did Esther, feel it to be our duty to warn you of the impending danger, and arouse you to such action as may tend to avert, if possible, the threatened evil.

Like Haman, who, after speaking of his riches, the multitude. of his children, and his preferment both by the King and Queen, yet declared it availed nothing so long as Mordecai sat at the King's gate--so with our enemies. It avails nothing, that they have got control of the General Assembly, by deception, fraud, and intimidation; so long as the friend of the poor, and protector of the innocent and defenceless, occupies the Chair of State, and you have the right to go to the polls unmolested. They have therefore commenced a system of disfranchisement, by amending the charters of towns, by allowing but one day for voting, by allowing voters to be challenged at the polls, and by requiring each to vote in the township in which he resides. They have thereby already disfranchised thousands. But progress in this way is too slow for their purpose. They therefore propose to call a Convention. Having repealed the Militia law, they propose to let loose their murderous band, upon us and thus secure a majority of the delgates to this Convention. When this is done our liberties are at an end.

To avert the impending evil we see no power in the arm of flesh. We feel that we have too long neglected to seek aid at that source that never fails. The laws of righteous retribution have not been repealed, but are in force upon the statutes of the Almighty. Justice will riot sleep forever. If we call upon God he will hear and answer us.

We therefore propose a day of fasting and prayer throughout the State. Let us ask God to bring our good friend the governor triumphantly through this ordeal, and to avert the evils that are hanging over us.

LET FRIDAY THE 13TH DAY OF JANUARY, be set apart as a day of fasting and prayer, throughout our habitations. Let no strong drink or other luxuries, be used for the three days preceding. Let the people assemble in their places of worship and cry unto the Lord. Let the maid-servants, whose employment will not permit them to worship during the forenoon ask their employers to allow them the afternoon, that they may spend it in fasting and prayer on behalf of the Governor and our suffering people.

Let the Ministers of the Gospel proclaim this fast and see that it is observed. If this call is heartily responded to God will deliver us.

B. H. JONES,
from Northampton County.