A huge face and other carved head images are visible at the top of the south gate tower of Bayon Temple. Such serenely smiling faces are carved on stone towers throughout the Bayon Temple at Angkor Thom, literally meaning the "Great City."

Angkor Thom was a fortified city built from the early eleventh to the late twelfth centuries A.D. during the reigns from Suryavarman I to Jayavarman VII. Because it was built over a long time by successive kings, it really has two city centers and differing architectural and sculpture styles. Angkor Thom, located just north of the Angkor Wat site is the largest building complex in the Angkor area.

The Bayon Temple complex was built under the direction of the Mahayana Buddhist ruler Jayavarman VII, who ascended to the Khmer kingdom's throne at Angkor in 1181 A.D. He erected the site for Buddhist worship, although it later was renovated and used as a Hindu temple. Various forms of Hindu and Buddhist worship were practiced side-by-side and successively in the ancient royal courts of Southeast Asia.

Classical Khmer kings promoted the idea (known as "devaraja") that there was an intersection of the ruling king and a validating god. Usually the Hindu god chosen for this personal identification was Siva, but sometimes it was Vishnu, or, for some, a godly image of Buddhist origins. Khmer temples thus often portray the ruling king incarnated as the god, whose shrines are within a monument on earth that models the design of the cosmos and heavens.

The faces depicted on the Bayon towers clearly resemble faces on known portrait statues of Jayavarman VII. Given his Buddhist leanings, it is thought that the huge faces portray him in semi-divine form as a "boddhisattva," an enlightened being conceived in Mahayana Buddhism who postpones entering Nirvana in order to remain on earth helping others towards salvation. Boddhisattvas are somewhat like Mahayana Buddhist saints.

Four faces, looking toward the cardinal directions, are carved on the sides of fifty-four standing towers at Bayon Temple. The preservation of many of the towers, however, is poor so it is difficult to know exactly how all the towers were carved. Over 200 giant smiling faces remain, but there may once have been between one and two hundred towers, each with four faces. These structures are known as "face towers."

The bas-relief carvings on the outer walls of the Bayon towers depict heroic historical tales as well as scenes of everyday Khmer life. Jayavarman VII was a capable military commander who repelled attacks by the Champa kingdom before becoming the Khmer king and undertaking a massive effort to construct stone temples and other monuments.

Ultimately, it was the Siamese kingdom based in what is now Thailand, that sacked Angkor in 1431 and ended the kingdom's regional power. 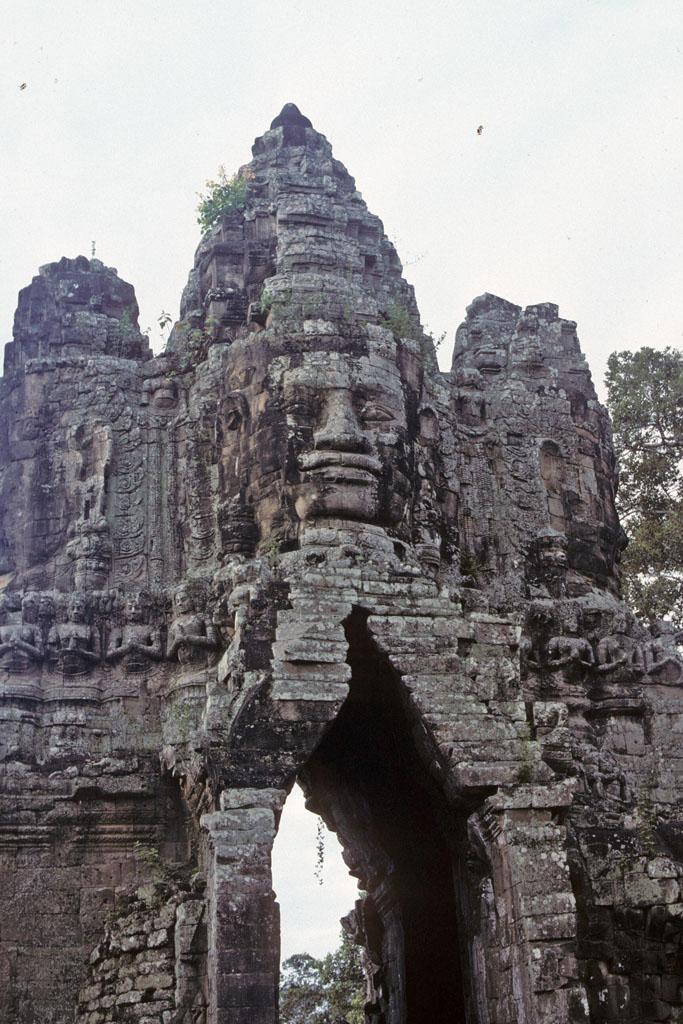