The looking glass for 1787. A house divided against itself cannot stand. Mat. chap. 13th verse 26

This watercolor was created by Amos Doolittle (1754-1832) depicting the rival factions (Federals vs. Antifederals) on the eve of the ratification of the U.S. Constitution.

When delegates to the Constitutional Convention assembled at Philadelphia in May, 1787, the intention was to revise the Articles of Confederation. However, it became apparent that the document upon which the United States government would be based needed an entirely different foundation. Federalism became that foundation.

Federalism is a system of dividing power between different levels of government: National, State, and Local. For more information about federalism and the United States Constitution, view the video Federalism, available from the National Constitution Center in Philadelphia. 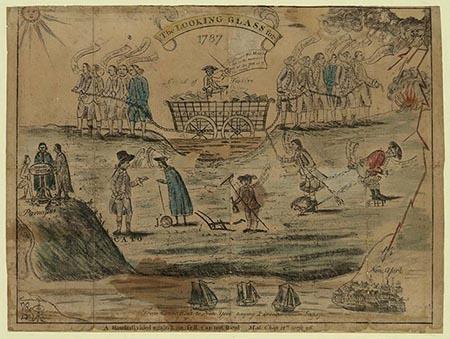 Read the related article:
The Constitution of the United States
Transcript:

A satire touching on some of the major issues in Connecticut politics on the eve of the ratification of the U.S. Constitution. The two rival factions shown are the "Federals," who represented the trading interests and were for taxes on imports, and the "Antifederals," who represented agrarian interests and were more receptive to paper money issues. The two groups were also divided on the issue of commutation of military pensions. The artist here evidently sides with the Federals. Connecticut is symbolized by a wagon (top center) loaded with debts and paper money, the weight of which causes it to sink slowly into the mud. Its driver warns, "Gentlemen this Machine is deep in the mire and you are divided as to its releaf--" The wagon is pulled in opposite directions by two factions of the state's Council of Twelve. On the left under a beaming sun are five Federal councillors, who proclaim: "Pay Commutation," "Drive them to it," "I abhor the antifederal Faction," and "Comply with Congress." On the right the sky fills with angry storm clouds spewing thunderbolts, while the earth erupts in flames. Below six of the council's Antifederal members pull on their chain crying: "Tax Luxury," "the People are oprest," "curses on to Foederal Govermt.," "Success to Shays" (an allusion to charges that they sympathized with agrarian radicals led by Daniel Shay in Massachusetts), and "Curse Independence." The seventh Antifederal on the council, William Williams (here labeled with his press pseudonym "Agricola"), also appears. He stands defecating at right, with his trousers undone and a small animal--probably a skunk--between his feet. Williams remarks, "I fear & dread the Ides of May" (i.e. the May 15 elections to the upper house). The skunk sprays toward Williams's enemy Samuel Holden Parsons (far right, identified as "S--H--P"), president of the state's Society of the Cincinnati. Parsons, also obscenely bending over, sprays back saying, "A good Shot." In the left middleground, "Cato," a pseudonymous contributor to the "New Haven Gazette," comments, "I despise your Copper" to the man beside him, who holds a Connecticut coin and mutters, "Cur's commutation." In the center a farmer with a plough, rake, and bottle complains, "Takes all to pay taxes." In the left foreground three members of the Connecticut Wits stand on the Mount "Parnassus," and read from a scroll "American Antiquities" (excerpts from their "Anarchiad" published in Connecticut newspapers beginning in October 1786). To the right is the Connecticut shoreline and the buildings of Manhattan, the latter threatened by thunderbolts from the upper right. Three merchant vessels ply a body of water below, "From Connecticut to New York paying L40000 per annum Impost." In the left corner a tiny figure sits at a w7riting desk, reading a paper with the verse: "Tweedles Studdy/as I sit plodding by my taper." This piece alludes to a satirical poem by "Trustless Fox" in the "New Haven Gazette" of November 23, 1786. Its opening lines are: "As I sat plodding by my taper, I wreaked a glance into the paper . . . ." The interpretation given above is largely based on the commentary of a Sotheby's cataloger (see reference below). That writer suggests that "Trustless Fox" and the designer of "The Looking Glass for 1787" may have been one and the same, based on the references to material in the New Haven Press.