After World War I ended, thousands of U.S. soldiers returned to everyday life. Among them were more than 350,000 African Americans who served their country and fought for democracy during the war. Having defended their country, they unfortunately returned home to increased racial tensions across the country, continued racial discrimination, and, at times, racial violence. As white supremacy continued and racial tension increased, African Americans discovered that they were still fighting a war at home for equality and democracy. And in particular, African American World War I veterans faced discrimination and racial violence as well.

In May of 1919, WEB Du Bois published an editorial in The Crisis addressed to returning African American soldiers and veterans. In it, he described the racial injustices occurring across the United States. The article concluded by encouraging returning soldiers to continue to fight for freedom -- this time for themselves and the African American community. This image shows the opening paragraph of his editorial. Read the entire piece here.

The Crisis is the official newspaper of the National Association for the Advancement of Colored People (NAACP). The magazine started in 1910 and is the oldest African American magazine in the world. After World War I African Americans faced increased racial tensions across the U.S.

“We return.
We return from fighting.
We return fighting.
Make way for Democracy! We saved it in France, and by the Great Jehovah, we will save it in the United State of America or know the reason why.” 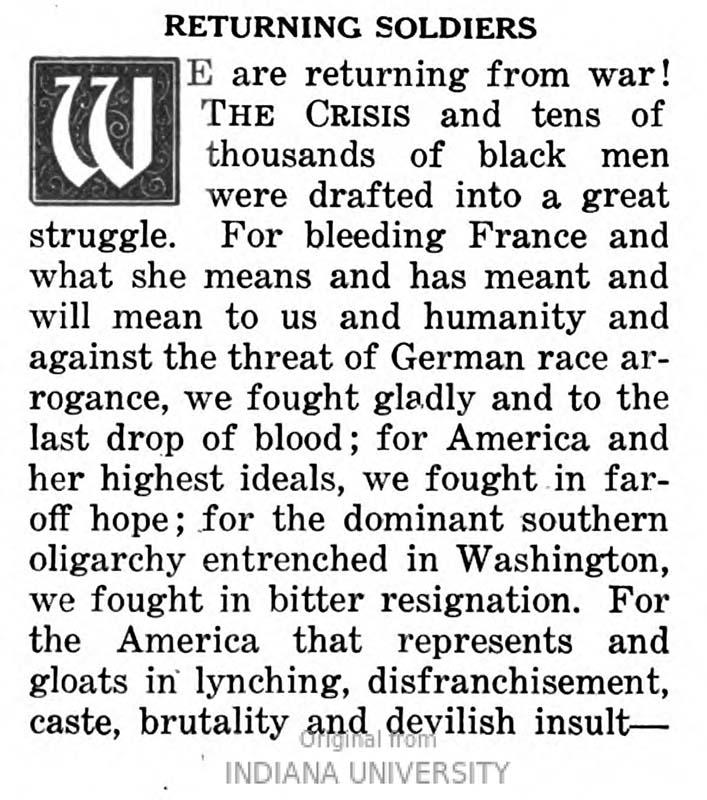